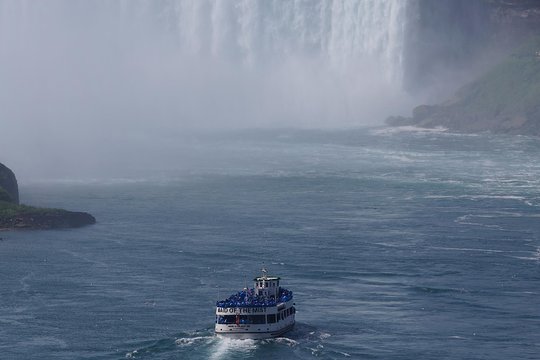 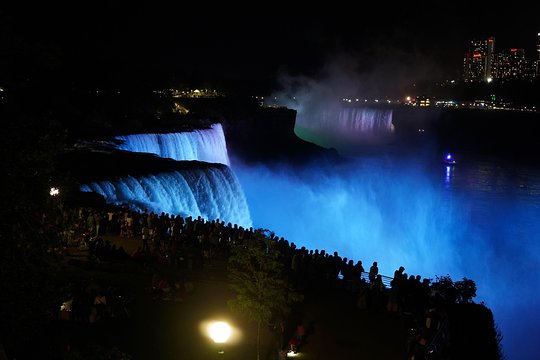 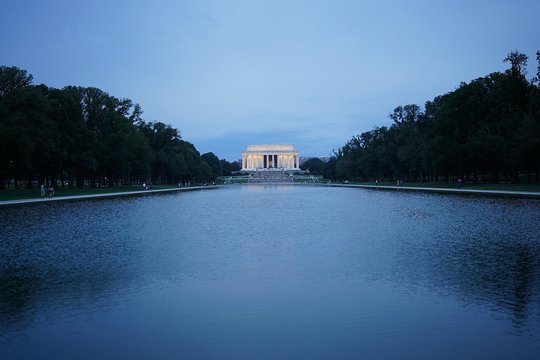 2. For flights arrives between 8:30AM to 0:00AM, please meet the tour leader at baggage claim area (domestic flights) or outside of Custom (international flights) ;

4. If guests arrive at EWR airport, and stay in Ramada Hotel, feel free to take hotel shuttle bus and check-in with your ID.

5. Please note that normal check-in times apply at our start hotels, but you can usually store your luggage for the day if you arrive early. And feel free to explore.

Thanks for choosing your vacation with us! Hope you have a great rest, and meet your tour leader after enjoying breakfast at 8:00am in the lobby next day.

No meals included on this day.
Accommodation included: Overnight at Ramada Plaza by Wyndham Newark International Airport Or equivalent

Stop At: 2 Lincoln Memorial Cir NW, Washington DC, DC 20037
The Lincoln Memorial is an American national memorial built to honor the 16th President of the United States, Abraham Lincoln. It is located on the western end of the National Mall in Washington, D.C., across from the Washington Monument.
Duration: 30 minutes

Pass By: Washington, DC, USA
(All day schedule)In the morning, we depart from New York, passing by New Jersey and Philadelphia, arriving in Washington D.C. in late afternoon. Firstly, we stop at National Mall where there are Capitol Hill and all the Smithsonian Museums. Later, we will see the White House, and understand the core of the US government. Then, Lincoln, Korea and Vietnam Memorials will be seen. After we finish the tour in Washington D.C. we head north to the hotel.

We will also pass by Jefferson Memorial, Washington Monument, WWII Memorial and more.

Stop At: Goat Island, Niagara Falls, NY
Goat Island is an Island in the Niagara River located between the two waterfalls that makes up Niagara Falls. Its Terrapin Point is often visited by tourists and offers some of the most breathtaking views of the falls.

Stop At: Quality Hotel & Suites At The Falls, 240 1st St, Niagara Falls, NY 14303, USA
Since we stay in walking distance hotel to the Falls, after checking in, you can enjoy Niagara Falls by yourself. And don’t forget to see the fabulous illumination and night view of the Falls. You may see fireworks in some summer nights.
Duration: 10 hours

Stop At: Niagara Falls State Park, 332 Prospect St, Niagara Falls, NY 14303-1106
the Horseshoe Falls, the American Falls, and the Bridal Veil Falls. the combined falls form the highest flow rate of any waterfall in North America that has a vertical drop of more than 50 meters (160 ft). During peak daytime tourist hours, more than 168,000 m3 (six million cubic feet) of water go over the crest of the falls every minute
Duration: 1 hour

Pass By: Corning, Corning, Finger Lakes, New York
(All day schedule)In the morning, we leave from the capital of United State and head north, via the stunning Highway 15 and arrive at Corning for lunch before we continue. Via Highway 90, we are on the way to the world-famous Niagara Falls. Arriving in late afternoon, we will witness the amazing US side of Falls, including American Falls, Horseshoe Falls, Bridal Veil Falls, Goat Island and Luna Island. We will also take a night tour to the falls, enjoy the beautiful illumination display coloring the thundering waters. Overnight in Niagara Falls City.

Since we stay in walking distance hotel to the Falls, after checking in, you can enjoy Niagara Falls by yourself. And don’t forget to see the fabulous illumination and night view of the Falls. You may see fireworks in some summer nights.

No meals included on this day.
Accommodation included: Overnight at Hotel & Suites at the falls or equivalent

Pass By: Niagara Falls, Niagara Falls, New York
(All day schedule)After breakfast, listening to the roar of passing flows as we walk to Horseshoe Falls for an amazing lookout point. Later, we experience the full power of Niagara aboard the Maid of the Mist. Around noon we will depart for New York City. Your trip ends in the evening as we return to New York City. We wish you enjoy the trip and safe journey back to the city that never sleeps!

Stop At: Maid of the Mist Boat Tour, 1 Prospect St, Niagara Falls, NY 14303, USA
Maid of The Mist
It's the combination of height and volume that makes Niagara Falls so beautiful. More than 6 million cubic ft. (168,000 cubic meters) of water goes over the crest line of the falls every minute during peak daytime tourist hours. This famous Maid of the Mist ride gets passengers as close as possible to the Niagara Falls! The Maid rides right into the mists thrown up by the roaring cascade as the Niagara River tumbles over the edge of the falls.
Duration: 30 minutes

No meals included on this day.
Accommodation included: overnight at Ramada Plaza by Wyndham Newark International Airport Or equivalent

Stop At: Liberty Cruise Ship Center, 121-18 Liberty Ave, South Richmond Hill, NY 11419, USA
Any trip to New York City must include a boat cruise around the Statue of Liberty. This iconic landmark has stood in the city that never sleeps for more than 100 years, as a joint effort between America and France to celebrate the anniversary of America's independence. And the sightseeing cruise tour on the Hudson River to enjoy the city view from a totally different angle, as well as take pictures with Brooklyn Bridge.
Duration: 1 hour

Pass By: Trinity Church, Broadway at Wall Street, New York City, NY 10006
Trinity Church (also called St. Paul's Chapel) is the oldest public building that is in continuous use in NYC. The current church is the third on this site; the first Trinity Church was built in 1698.

Stop At: Wall Street, New York City, NY 10005
This famous street in New York City's Financial District has become synonymous with American financial enterprises. It is also the home of the New York Stock Exchange, and has been (or still is) the location of several other exchanges.
Duration: 20 minutes

Pass By: Charging Bull (Wall Street Bull), 26 Broadway, New York City, NY 10004-1703
This bronze sculpture that sits at the northern tip of New York's Bowling Green Park is ready to strike! It was commissioned to represent the "strength and power of the American people" after the stock market crashed in 1987.

Stop At: The Metropolitan Museum of Art, 1000 5th Ave, New York City, NY 10028-0198
The Metropolitan Museum of Art is not just the largest art museum in the United States, but also one of the three biggest in the world. Its collection contains more than 2 million works of art. The permanent collection consists of works of art from classical antiquity and ancient Egypt, paintings, and sculptures from nearly all the European masters, and an extensive collection of American and modern art.
Duration: 2 hours

Pass By: New York City, New York City, New York
(All day schedule)At a first glance, traveling around the entire of New York City seems like the mission impossible; however, our highly organized tour is specially designed for you: by visiting amounts of famous landmarks, you will learn more of the city’s unique history, culture, and the core spirit of the New Yorkers!

1. Guests must have a valid passport or ID to enter the United Nations.

No meals included on this day.
Accommodation included: overnight stay at Ramada Plaza by Wyndham Newark International Airport Or equivalent

Stop At: Chinatown, Canal Street to Bayard Street, New York City, NY 10013
It is a neighborhood in Lower Manhattan, New York City, bordering the Lower East Side to its east, Little Italy to its north, Civic Center to its south, and Tribeca to its west. With an estimated population of 90,000 to 100,000 people, Chinatown is home to the highest concentration of Chinese people in the Western Hemisphere. Manhattan's Chinatown is also one of the oldest Chinese ethnic enclaves.
Duration: 1 hour

Stop At: Brooklyn Bridge, New York City, NY 10038
This bridge is a hybrid cable-stayed/suspension bridge in New York City. It connects the boroughs of Manhattan and Brooklyn, spanning the East River. The Brooklyn Bridge has a main span of 1,595.5 feet (486.3 m) and a height of 276.5 ft (84.3 m) above mean high water. It is one of the oldest roadway bridges in the United States and was the world's first steel-wire suspension bridge, as well as the first fixed crossing across the East River.

Stop At: New York Public Library, 476 5th Ave New York, NY 10018, New York City, NY 10018
It is the representing building in the New York Public Library system and a landmark in Midtown Manhattan, New York City. The branch, one of four research libraries in the library system, contains nine separate divisions. The structure contains four stories open to the public. The main entrance steps are at Fifth Avenue at its intersection with East 41st Street. As of 2015, the branch contains an estimated 2.5 million volumes in its stacks.
Duration: 30 minutes

Stop At: 59th to 110th Street Manhattan Borough, from Central Park West to 5th Avenue, New York City, NY 10022
Arguably one of the most famous parks in the world, Central Park is a manmade wonder. Not only is it the first public park built in America, but it is also one of the most frequently visited.
Duration: 30 minutes

Stop At: Lincoln Center for the Performing Arts, The David RubenStein Atrium Broadway & 64th Street - main entrance, New York City, NY 10023
It is a 16.3-acre (6.6-hectare) complex of buildings in the Lincoln Square neighborhood of the borough of Manhattan in New York City. It hosts many notable performing arts organizations, which are nationally and internationally renowned, including the New York Philharmonic, the Metropolitan Opera, the New York City Ballet and the New York City Opera.

2. For flights arrives between 8:30AM to 12:00AM (Midnight) , please meet the tour leader at baggage claim area (domestic flights) or outside of Custom (international flights) ;

3. For flights arrives later than 12:00AM(Midnight) , we will provide the driver information one-day before the trip, if there is any question, please call us;

Looking for tour escort dress yellow uniform with Universal Vision logo on it.

This tour has not yet been reviewed, but you can read what other travellers have to say about this operator.

Val J
Hillsborough, New Hampshire
103
Know before u book
Pros: dropped us off and picked us up at areas described; admission was included to hornblower tours of statue or…
Read more

kkkzzzzz
Hong Kong, China
22
Bully and verbal violence from the tour guide and the driver
Our tour guide on the last day of our tour in Chicago was Mandy (Chinese name 小红, cell phone ending 0786) and she…
Read more

Marlene H
31
Best of Boston with Sam I Am
Excellent tour. Fun history facts.Sam was so knowledgeable and humorous. History comes alive with his excellent…
Read more

gisticc
11
Nice
We just got back from this tour today... Ken, our tour guide, had a great sense of humor and along with his jokes…
Read more

frequent traveller
11
Canada
Boris, the tour guide was a professional from the beginning to the end of the trip. He maintained group harmony…
Read more

Jarasierras
12
Terrible service
in the end they tell you that you have to give a driver $ 20 COMPULSORY tip, so you have to take this price…
Read more

Adrián C
Quartier Latin, France
32
A Journey ONLY for Chinese
It was our second time with tours4fun, the first time (tour 4 days Canada) we got a fantastic guide (VICKY) that…
Read more

Saf kar
12
Rude tour guide.
Me and my family went to a 2 days Niagara falls tour from NYC. Overall, the journey was good but the tour guide's…
Read more