shell53 wrote a review Sep 2022
London, United Kingdom19 contributions4 helpful votes
Not up to standard
Let’s start firstly with Princess customer service overall. Absolutely diabolical as there is no customer service what so ever! The company never answer their phones or reply to emails, messages or social media. Total shambles which means as soon as your booking is taken and monies handed over you are on your own. Hence no Golden Wedding Anniversary celebrations for us on this special occasion.

The food on board would have been more acceptable had it not been cold throughout the ship. Evening meals were tepid, and repeated throughout the cruise with boring choices.
Self service food stations were just as bad which were served on plastic plates, plastic mugs for tea and coffee, and bar drinks in self service area were served in plastic scratched containers.
The salads in the self serve Horizon restaurant looked wonderful until the full plate my husband took back to the table made him think twice before eating as there it was, crawling amongst the greenery, a wriggling maggot trying to escape from under the lettuce leaves. And that was the last time we ate there.

Having complained about the cold food throughout the ship during our two weeks cruise we were then offered a complimentary meal at one of the specialty restaurants, unfortunately the same happened, cold food! which meant we left the food and restaurant and made our way to the 24 hour cafe and ordered a sandwich to play safe.

The entertainment was very poor around the ship, the bar staff declined to use the medallion for payment on board but instead asked for the cabin number, unfortunately for me as the numbers were transposed most of the time we ended up with a mega bar bill used by others guests. The ironic thing though, I had paid for all inclusive but spent my days at reception trying to sort the problem out, nightmare!

The stateroom was lovely though and the steward came over as very genuine. Bearing in mind we had paid for the gratuities on board but I felt the need to pay the steward extra at the end of the trip for his services, bad mistake as once paid he didn’t bother coming back to our stateroom on the last day of our cruise leaving wet towels in the shower, no milk for tea or coffee and as the bins were full I had to use a carrier bag for my rubbish. I will never tip again on top of the gratuities.

I didn’t attend any form of fire drill as nothing was mentioned or paperwork received, it wasn’t until both myself and my husband had been onboard for a week did we receive a letter put into the stateroom informing us that we hadn’t attended the initial fire preparation drill on our first day, I felt so embarrassed for not attending something so serious but it wasn’t our fault.

I am disappointed with our cruise this time, the food is the main hi light for us but to be honest we just couldn’t eat it due to it being cold every single day. Princess need to get their act together as there are so many more cruise line to choose from……
Read more
Sail Date: September 2022
Cabin Type: Suite
Type of Trip:
Destination: Mediterranean
Cabin
Dining
Service
Pools & Sundecks
Onboard Activities
Entertainment
Value
This review is the subjective opinion of a Tripadvisor member and not of Tripadvisor LLC. Tripadvisor performs checks on reviews.
Helpful
Share
Scroll below for other great reviews 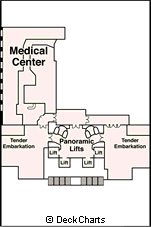