Geoff B wrote a review Oct 2022
Oxspring, United Kingdom3 contributions
Worst Cruise Ever
Even though we completed the pre-boarding documentation the process boarding was disorganised and lengthy. The staff at the port were aggressive, unhelpful, and rude, boarding was a real ordeal. The suite was spacious, clean, and comfortable. There were 2 excellent shows in the evening, we were disappointed because we expected more of them. We enjoyed seeing Ketchikan and the wildlife excursion was excellent. The ship arrived and departed 45 minutes early from Juneau, the excursion we booked with Princess Cruises left 15 minutes after the scheduled time, I.e., we wasted an hour waiting on the dockside. The bus which took us to the departure harbour for the whale watching excursion was old and dirty, it broke down on the way there. The replacement bus was also old and dirty, there was a further delay because they could not close a door. The excursion was wonderful, the range of wildlife and the commentary were very good. On the was back to Juneau the bus driver took a detour so we could see Juneau from across the river. The result of the delays was the boat was boarding when the bus arrived at the port, so we didn’t have time to visit Juneau. The captain announced that due to a landslide and heavy seas we were unable to visit Skagway. The ship diverted to Sitka, the only excursions on offer were more wildlife tours. According to the news reports, the landslide at Skagway occurred on the 19th of August, therefore Princess Cruises was fully aware that docking was subject to weather conditions, however no information was provided. In summary we booked because we wanted to see ALL of the towns and attend the excursions that were advertised. We were unable to see2 of the 3 towns and we were very disappointed to miss a key excursion.
Read more
Sail Date: September 2022
Cabin Type: Suite
Type of Trip:
Destination: Alaska
Cabin
Dining
Service
Pools & Sundecks
Onboard Activities
Entertainment
Value
This review is the subjective opinion of a Tripadvisor member and not of Tripadvisor LLC. Tripadvisor performs checks on reviews.
Helpful
Share
Scroll below for other great reviews 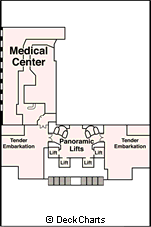