FindHotel
Destinia.com
Trip.com
View all 14 deals
Prices are the average nightly price provided by our partners and may not include all taxes and fees. Taxes and fees that are shown are estimates only. Please see our partners for more details.
BJS14
Bedford, United Kingdom
68

Pleasant Parador to stay at with breakfast being excellent. We will stay there again as an good alternative to staying at the Salamanca, Parador..The Parador although not particularly easy to find for the first time is in an elevated and quiet location and Cuidad Rodrigo town is delightful. More

We are glad to know that your stay has been satisfactory.
We look forward to welcoming you again very soon.

Report response as inappropriateThank you. We appreciate your input.
This response is the subjective opinion of the management representative and not of TripAdvisor LLC
See all 1,225 reviews
Nearby Hotels 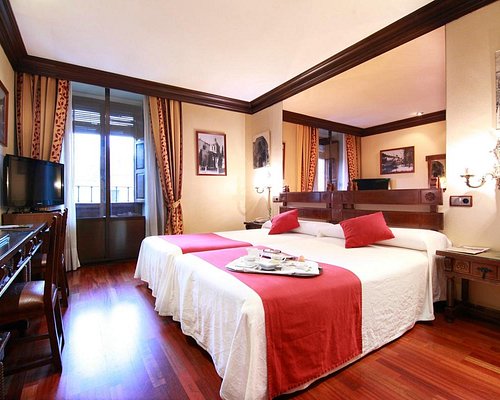 Hotels.com
View deal
Web Oficial
Booking.com
US$134
Expedia.com
US$137
View all 16 deals from US$133
247 reviews
0.3 km from Parador de Ciudad Rodrigo
We compared the lowest prices from 16 websites 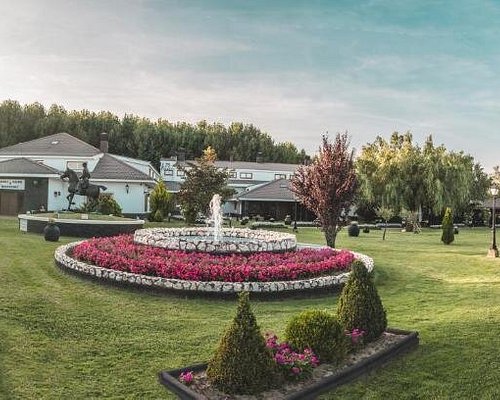 Excepcional place. Aside from the historic/al place and the incredible views, the hotel is impeccable: clean, well-kept and with attention to detail. The staff are extremely cordial, helpful and professional.
The cafeteria and restaurant too. We had an afternoon tea there and, later, dinner.
Absolutely spotless service and the food was top quality too.
Would love to return.


We are glad to know that your stay with us has been completely satisfactory.
We hope to welcome you again very soon.

Report response as inappropriateThank you. We appreciate your input.
This response is the subjective opinion of the management representative and not of TripAdvisor LLC
julietten683
Madrid, Spain
628
Reviewed 10 November 2019
Historic castle for a fantastic stay

A great place to stay: we were given a warm welcome by the excellent staff, and had a comfortable room looking out towards the Portuguese border. We loved exploring the castle- the tower was a fun climb and the short stretch of wall and lovely gardens worth the effort. The bar is an atmospheric space and the food here is particularly good. We enjoyed the tasting menu, especially the local cheese and charcuterie, and I'd make a special note of the cakes and biscuits arlt breakfast, which were nothing short of delicious. In all, a great historic place to stay, where you can relax in comfort in a beautiful town.

Review collected in partnership with Paradores Hotels
This business uses tools provided by Tripadvisor (or one of its official Review Collection Partners) to encourage and collect guest reviews, including this one.
Ask julietten683 about Parador de Ciudad Rodrigo
Thank julietten683

Thank you very much for your kind comments and ratings.

We are glad to know that your stay at the Parador has been satisfactory, knowing every corner of this history castle.

We hope to welcome you again very soon.
Best regards,

Report response as inappropriateThank you. We appreciate your input.
This response is the subjective opinion of the management representative and not of TripAdvisor LLC
PenRic39
Woolacombe, United Kingdom
5530
Reviewed 5 November 2019
Average Parador

We stayed on the way to Santander. Although the Castle is beautiful and the surrounding views stunning, the Parador is a bit average. The beds were very hard and uncomfortable, the food is not the best we have had at Paradors and the breakfast fairly poor. The Reception and Bar were friendly enough, but the Restaurant was a bit of a 'take it or leave it' situation - I guess why it was so quiet!
Sorry but we wouldn't return to this one.

Please accept the apologies for the incidents you tell us.
We feel that your stay has not been satisfactory, and we hope to receive you again so that you can verify that we have taken the appropriate measures.

Report response as inappropriateThank you. We appreciate your input.
This response is the subjective opinion of the management representative and not of TripAdvisor LLC
tobylhanson
Edina, Minnesota
52
Reviewed 4 November 2019
A Medieval Experience

The Ciudad Rodrigo parador is located in a fourteenth century castle built as part of the medieval walls protecting this historic border town. From the moment you step through the gate into the courtyard it's like a time-trip into the Crusades. The parador is beautifully decorated with suits of armor, coats of mail - one even complete with Crusader tunic and helmet, as well as other artifacts from that period. The lounge areas have been artfully redone to allow light to enter - a great idea especially when it comes to medieval castles, and they are warm and inviting. Our room overlooked the garden with fruit trees and had a wonderful view of the river valley and surrounding area. The breakfast buffet was splendid - all sorts of local specialities, eggs made to order, fresh smoked salmon, pastries including churros, breads and rolls, fruits, cereals, cheeses and meats, coffees, teas, hot chocolate, fruit drinks, water and even wine.There is free parking available within the walls of the parador. Added benefit - check with the desk manager - the watchtower the forms part of the building is open for touring during certain times and free to parador guests. You can step directly out of the parador onto the walkway along the old city walls and walk completely around the old city in about 25 minutes and end back at the parador.

Review collected in partnership with Paradores Hotels
This business uses tools provided by Tripadvisor (or one of its official Review Collection Partners) to encourage and collect guest reviews, including this one.
Ask tobylhanson about Parador de Ciudad Rodrigo
Thank tobylhanson

Report response as inappropriateThank you. We appreciate your input.
This response is the subjective opinion of the management representative and not of TripAdvisor LLC
16892
Bath, United Kingdom
3752
Reviewed 3 November 2019
Cutting too many corners.

The building and its location are spectacular. The rooms are not quite as large as in some other Paradors but adequate and with well-appointed bathrooms. There is free, off-road (but not secure) parking. However, on the occasion of our visit, there was a major issue with the level of service. As is our wont, we repaired to the bar for an aperitif before dinner. The bar is adjacent to the restaurant and contained several other customers, who had obviously been served, but nobody behind the bar. There was a bell push on the bar with a notice inviting one to push it in order to summon service. This I did, but with no result. After 5 minutes I pushed it again but no bartender was forthcoming. I continued to push the button at increasingly frequent intervals for half an hour, without effect. By that time, all the other customers in the bar had migrated to the dining room, so we gave up and followed them. There were just two waitresses in the restaurant to serve a full dining room of more than 40 covers, including two parties, one of 8 and another of 6, who did not seem to be guests of the Parador. Naturally, the waitresses failed to cope with these numbers. It transpired, on enquiry, that the reason for the lack of service in the bar was that they were supposed to cover the bar as well and respond whenever the bell there was pushed. They were so inundated with work in the restaurant that they had decided to give up any attempt to do so and simply ignored the bell. I do not feel that they can in any way be blamed for this. I will not review the restaurant as I feel that it would be unfair to do so in these circumstances. The nest morning at breakfast, we were served a pot of coffee that was virtually stone cold. When I pointed this out, it was replaced quickly and willingly. The only other person we saw in the establishment was the man at reception, who apologised for not being able to help with our luggage because he could not leave reception in case other guests arrive for check-in. Admittedly, our visit was towards the end of October and very much out of season but the restaurant was full and presumably there were other guests who did not eat there. The Paradors present themselves as a collection of up-market hotels designed to appeal to an international clientele. In that context, there is a line below which the level of service cannot be allowed to fall; at Ciudad Rodrigo the Paradors are coming perilously close to that line.

Dear Customer;
First of all, thank you for your time in sending us your opinions and these needs that you have encountered and that, do not hesitate, we will inform you of the departments affected so that it does not happen again.
Apologize on behalf of all staff

Report response as inappropriateThank you. We appreciate your input.
This response is the subjective opinion of the management representative and not of TripAdvisor LLC
View more reviews
PreviousNext
123…
<script type='text/javascript' crossorigin='anonymous'