US$227
US$104
View Deal
SAVE US$123
Free cancellation until 13/03/21
Expedia.comUS$104
Orbitz.comUS$104
ZenHotels.comUS$227
View all 15 deals
Prices are the average nightly price provided by our partners and may not include all taxes and fees. Taxes and fees that are shown are estimates only. Please see our partners for more details.
CodyDC
Washington DC, District of Columbia
637319

Selected this hotel based on the reviews and photos of Tokyo Tower from Trip Advisor and was not disappointed. Paid for the Tokyo Tower view which I would recommend. The service from time of arrival to time of departure was great and staff made me feel welcomed. Views from the room was nice and relaxing. The location was great as it offered many options, multiple subway stations and walking distance to several sights like Ginza district. As previous TA posts suggested head for Exit 7 in the underground for the Subway for the Hotel exit. In the underground (Basement), there is a convenience store and easy access to the multiple subway stations. If you take the Pedestrian bridge (Floor 3 on Elevator) across the street, there is a few restaurants, Starbucks and Tulley's Coffee and English Pub as alternative to hotel restaurant. The hotel breakfast buffet would be my one negative comment, it was just ok, the offerings was minimum compared to other hotels I've stayed. Other recommendations would be to try the coffe shops, bars and restaurants near the train station along the track bridge which is about 5 minute walk. Arriving from NRT airport, took the Narita Express train to Tokyo Central, then took taxi to hotel, which cost about 170 JPY. Overall enjoyed the stay at this hotel and would recommend to others traveling to Tokyo.More

Show less
Room tip: Get a View of Tokyo Tower
See all 3,824 reviews
Nearby Hotels 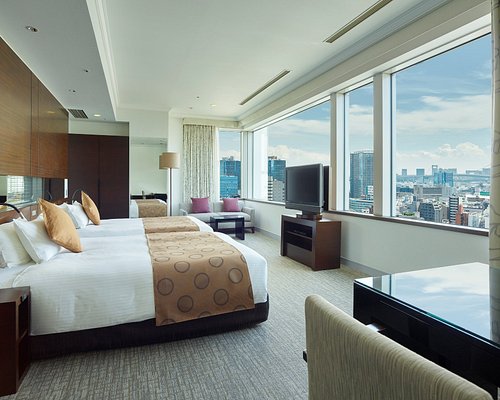 Agoda.com
View Deal
Free cancellation
Hotels.com
US$52
Expedia.com
US$52
eDreams
US$72
View all 13 deals from US$49
61 reviews
2.5 km from Park Hotel Tokyo 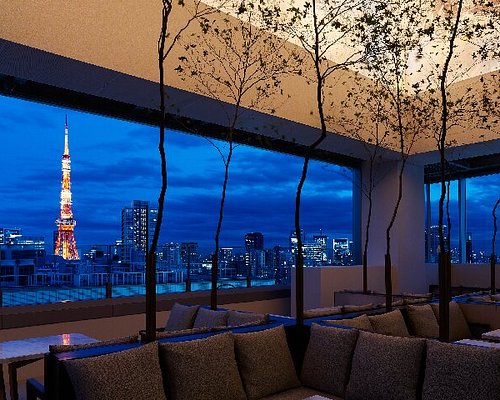 Agoda.com
View Deal
Free cancellation
Hotels.com
US$78
FindHotel
US$68
Booking.com
US$86
View all 12 deals from US$68
6 reviews
2.1 km from Park Hotel Tokyo

Hotels.com
View Deal
Free cancellation
Pay up to 12X
Expedia.com
US$216
Agoda.com
US$154
ZenHotels.com
US$254
View all 15 deals from US$154
2,115 reviews
1.4 km from Park Hotel Tokyo
We compared the lowest prices from 15 websites
Shinagawa Prince Hotel
US$85

Hotels.com
View Deal
Free cancellation
Reserve now, pay at stay
Expedia.com
US$85
Agoda.com
US$83
ZenHotels.com
US$213
View all 14 deals from US$83
4,401 reviews
4.4 km from Park Hotel Tokyo
We compared the lowest prices from 14 websites
Hotel Risveglio Akasaka
US$34

Hotels.com
View Deal
Free cancellation
Reserve now, pay at stay
Agoda.com
US$31
Trip.com
US$27
ZenHotels.com
US$41
View all 13 deals from US$27
214 reviews
2.5 km from Park Hotel Tokyo
We compared the lowest prices from 13 websites
Top Rated
Sponsored
Grand Hyatt Tokyo
US$316
US$225

Hotels.com
View Deal
Free cancellation
Pay up to 12X
Agoda.com
US$82
FindHotel
US$73
eDreams
US$162
View all 13 deals from US$73
31 reviews
0.7 km from Park Hotel Tokyo
We compared the lowest prices from 13 websites
Miyako City Tokyo Takanawa
US$49

Hotels.com
View Deal
Free cancellation
Reserve now, pay at stay
Expedia.com
US$38
Agoda.com
US$38
eDreams
US$43
View all 14 deals from US$38
39 reviews
2.1 km from Park Hotel Tokyo
We compared the lowest prices from 14 websites
APA Hotel Mita Ekimae
US$38

Hotel has a good location near one of the main metro stations. Its a good base to for Tokyo sightseeing with plenty of tour guides meeting their clients there.
Rooms - we had one of the artist rooms with launge access. They are lovely and very clean but pretty small. However, enough for a short stay.
Launge has sone basic snacks and alcohol.
Breakfast - very good quality, not a big choice to be honest but certainly sufficient with all western items and also traditional japanese food.
Restaurant - not a big choice and very limited for vegetarians as everywhere in Japan but good quality and enough if you tired and want to stay in the hotel in the evening.
Hotel also has a bar with quite an impressive choice of alcohol and great city views.
Overall good choice and recommended.

This review is the subjective opinion of a TripAdvisor member and not of TripAdvisor LLC
infinity1985
Hong Kong, China
1716
Reviewed 4 May 2018 via mobile
6 stars !

Park hotel , just my favorite brand ! Not a surprise ! Big rooms super good breakfast buffet ! Nice design and super friendly staff ! I was suggested by friends and I’ll decently come back ! Thanks everyone .

This review is the subjective opinion of a TripAdvisor member and not of TripAdvisor LLC
mummimamma5
31
Reviewed 3 May 2018 via mobile
Excellent service and Great location!

Two families, (a total of 4 parents ad 4 young adults) travelling together spent 3 nights here for our Easter holiday/50th birthday-trip. We got adjacent rooms of a decent size and a great view of Tokyo city. 3 of us have stayed here before and the location is great. The hotel is on the Shiodome station of the Yurikamome line, and a short walk to the Shimbashi station of the Tokyo subway system and the JR Yamanote loop line.
We got excellent assistance from the hotel concierge on several occasions. They were helpful booking restaurant tables for us (strongly adviced if you are a larger group like we were). Our 17 year old daughter injured her knee on the trip to Japan, and the concierge went out of their way lending us crutches and phoning ahead to find out if our next hotel in Osaka would have crutches. When this hotel didn’t they continued to make phonecalls to try and find crutches for sale in Tokyo. After about 20 phonecalls and a lot of internet searching they concluded that a doctor’s appointment was needed to buy crutches. Our travel insurance also suggested a visit to a doctor. Concierge was again very understanding and helpful and booked an appointment for us with an knee orthopaedic specialist. They also arranged for us to keep our room 3 extra hours on checkout day so we could stay in her room until the doctor’s appointment in the afternoon.
Park hotel Tokyo was the perfect place to stay to see as much of Tokyo as possible in 3 days. We walked to the fish market, to Ginza and to the Hamarikyu garden, and had easy access to areas like Harajuju, Akihabara, Odaiba and Ueno by way of the monorail, subway and Yamanote. The friendly and helpful staff made us feel very welcome and offered support, good advice and a persistent helpful attitude when it came to our daughter’s painful knee condition.
We will highly recommend Park hotel Tokyo and we will stay there again on a later occasion.

We arrived at this hotel on the 25th floor of the building wondering what to expect. Well, it had the wow factor. Wonderful greeting, staff couldn't do enough to make your stay enjoyable. The whole ambiance was relaxing. There was a calm about the building which we have never experienced before. The acoustics were incredible so you didn't hear any noise. It is certainly the place for a peaceful stay.

Both the bedroom and bathroom were well equipped and everything was so neatly packaged and presented. The room is not large but adequate.

Amazing views from the hotel rooms. We were on the top floor which was the 34th. On a good morning you can see Mount Fuji from the checkin desk.

Food was very expensive but Tokyo is an expensive city.

This review is the subjective opinion of a TripAdvisor member and not of TripAdvisor LLC
Jam_macL_A_Calif
L.A. Calif
4759
Reviewed 2 May 2018
Park Hotel, Tokyo Post Cruise Hotel

This hotel's lobby is on the 25th floor. We used coordinated transportation from the cruise port to the hotel Cost was 16,000yen. We had a private car to carry 4 large suite cases. Many taxis are not capable of handling this amount of luggage. This pricing from the hotel was reasonable. I check other sources, and having this booked to the room was easy so there was no monies exchanges. All charged to my credit card.......more points for me :):)

Personnel was awaiting our arrival to the hotel and coordinate our luggage to the check in floor. Personnel were extremely friendly and spoke very good English. We were checking into the 30th floor - we reserved a Queen bed room with city view. Best decision made. At night with the lights out in the room, we could view the lights of the city with a glass of wine in our hands.

The rooms are small. Just enough room to place on the floor 2 large suit cases. More or less the same size of a balcony cabin on a cruise ship. Bathroom has a very deep tub. Great water pressure and plenty of hot water. There is no shower spout. there is a hand held shower unit that hangs. Only item I found not favorable. The toilet has a warming unit plus other items to wash one self . Plenty of amenities plus extra razor, brush, tooth brush / paste, Room has a Frig and safe. Plus coffee / tea supplies.

The hotel is walking distance to the luxury shopping area. In the basement you can get subway transportation to all areas in Tokyo. We took the train to the Asakusa area. Was 200 yen per person each way. Took 15 minutes. In addition there are eating areas approx 300 feet from the hotel exit door. Note many places do not open until 7:00 or till 7:30am in morning. Places open later on weekends. So coffee not available until 7:30am........including Big Mac. There are Family Stores for general items needed in case you forgot something plus other places for limited shopping.

Internet was great in the hotel.........no trouble using.

We coordinate with the hotel for air port shuttle to Haneda - cost for 2 around 1800 yen. This was on a normal touring bus. Allow 4 hours from hotel - pick ups, etc, and getting to international terminal. Bus hits 2 other places prior to this terminal. We allowed 3 hrs and were lucky in checking in and by passed a long waiting line. We had just 45 minutes to get a small meal and a drink. If we had to wait in the long line we would have just made the plane.........Traffic to the airport can get very heavy so allow more time then expected...........

Most taxi drivers do not speak English. Or very limited. So have printed data on where you want to go........

We did find it interesting that there is no trash cans. You are expected to take your own trash with you for disposal. Also there is no smoking in shopping areas. There are fines. Streets are very clean.