StayForLong
Hotels.com
Travelocity
View all 14 deals
Prices are the average nightly price provided by our partners and may not include all taxes and fees. Taxes and fees that are shown are estimates only. Please see our partners for more details.
mattwKimarnock
Kimarnock
1524

Room tip: Top floors are the best for views
See all 4,066 reviews
Nearby Hotels 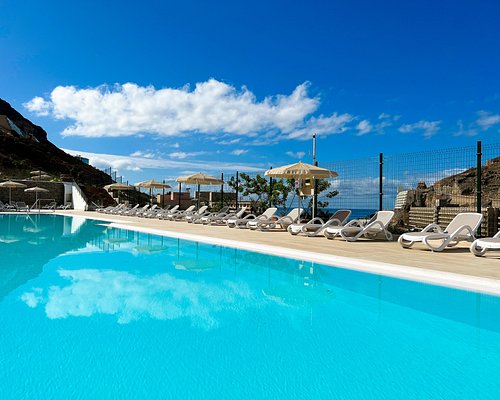 If you are looking for busy and night life then don’t visit this resort. It was peaceful, relaxing and child free - heaven
Food was outstanding, room was large and very clean, facilities excellent, drinks good quality )branded) staff helpful and polite and weather excellent for time of year

This review is the subjective opinion of a Tripadvisor member and not of TripAdvisor LLC.
roseduffett
Farnborough, Hampshire
153124
Reviewed 5 November 2019
Return stay but disappointed

We stayed for two weeks which was about our 5th holiday at Suite Princess.
At first, everything appeared much the same but as the days went on we noticed a lot of small changes. We knew the La Choza restaurant was closed for refurbishment and that didn't bother us too much even though it was nice to eat our lunch outside. There were sandwiches and salads in the Pool/TV bar but it wasn't the same.
Our main disappointment was with the food in the main restaurant. Breakfast was always excellent but i'm afraid, in our opinion, their standards have slipped with the other meals. The food was bland and lukewarm without the variety there used to be. We had hired a car from the airport so ate out three nights in Puerto Mogan.
Reading other reviews, since TUI took over on 1st November, there is no dress code for men in the restaurant which is a great shame.
Sadly, we have made the decision not to return. The hotel used to tick all our boxes but we felt let down this time.

This review is the subjective opinion of a Tripadvisor member and not of TripAdvisor LLC.
josenyvo
New York City, New York
1738
Reviewed 5 November 2019 via mobile
Excellent all inclusive concept: taking a bottle to your own appartment grand terrasse

Great place to relax and enjoy the high life! Different mood areas but be prepared to have your garment with you for one gala evening. Evening dress code at place. Rooms and personal are here to make you feel comfortable at all times.

This review is the subjective opinion of a Tripadvisor member and not of TripAdvisor LLC.
RachJarv
513
Reviewed 4 November 2019
Regular visitors and changes noticed

We have been coming to Suite Princess regularly for the last 6/7years as a couple. Also previously visiting Taurito resort hotels for the last 15 years. This review is based on a
booking made direct with the hotel and separate flights and transfers booked outside of agents /Tui. We
last came in February this year and rebooked for October and again for Feb 2020. We have met many people who have been coming here for a lot longer. We were aware that tui were taking over the majority control of the hotel from November 1st so expected a few changes - hopefully for the better. Have to say we have always been totally satisfied with all aspects and enjoyed our stays here. The overnight change on 1st of November now means that there is a change in dress code at dinner which resulted in quite a few coming into the restaurant in shorts (not dress or tailored) flip flops/sliders and baseball caps. They have spent many years enforcing a smart dress code and this appears to have changed completely the other way. We are on our last night of an 11 night stay and we have for a number of years booked directly with Princess Hotels at really reasonable rates. However,it would appear that TUi now have the monopoly on the Anglo / German bookings at this hotel and I fear the standards have already started to slip. We have endured 2 days of noisy German stag party weekendes of about 15 men (actually noisy,obnoxious boys) who have tried to dominate the normally quiet and peaceful atmosphere at this hotel - there has been no visible attempt by staff or the TUI representatives to address this. Uncomfortable for regular guests and those who wish to relax and enjoy the surroundings they are used to.
We still anticipate returning in February to take up our booking and hope that things will have settled and transition teething problems will have been sorted. The regular Princess Staff work very hard and are always friendly and accommodating and I hope this standard remains.

This review is the subjective opinion of a Tripadvisor member and not of TripAdvisor LLC.
johnboySheffield
Sheffield, United Kingdom
249187
Reviewed 1 November 2019 via mobile
Should have booked for 10 days

Transfer to this hotel could be 40 minutes from the airport but ends as 90 minutes because of the tortuous routes to all the drop offs. Mind you a taxi costs about €50! Each way. A lot has been spent on the local roads meaning the local ‘motorway’ has several long tunnels. The coastline here is very high and rocky. We are in a tall sided rocky valley with hotels and hotel skeletons either side and a water park and lovely botanical park up the middle.
Pleasant friendly staff throughout our stay. We were allowed in early to our room/suite which was at reception level - we found out later they’d put us in a non refurbished room (they’ve changed all bar 70 or so rooms in preparation for the change to SENSIMAR and then blue). It was a large suite that was pleasant but tired. Free safe with a keycard, kettle and bottled water that stacked up every day. It had a bath but upgraded ones only have a shower. UK channels on the tv. We never had to put towels down to reserve sun beds though for some reason some did?! (Yes, they were Germans!) Ok sun beds but you have to lay at the foot end to lay flat. Nice split pool - one deep and one shallow for aqua aerobics - nice to cool down in. Dark soft dark sandy beach that was well used - lovely to walk on in the waves in a morning waiting for the sun to get to our side. Pool bar was a general one at pool level inside that was used all day. Waiters only clear drinks here. Could also get soft drinks and basic beer and sangria and snacks in a tv/sports lounge next to the restaurant that was being refurbished. Little builder activity there though. Food was excellent at almost all meals. Wednesday lunch (30 Oct) was the worst lunch with cold burgers, little real choice and slow replacement of food - I complained to the front desk but doubt it went anywhere. A good range of options for each meal and the quality and cooking of meats and fish was good. Nice pears, soup and blue cheese(though it was a disappointment when blue cheese and pears weren’t on the evening menu). Battered food ended soggy though. At times frustrating waiting for a waiter to get you wine and water - you could get some drinks yourself. The advertised themes for meals didn’t reflect reality -fish night wasn’t, Chinese/Asian was a different night etc. The hotel don’t advertise it but you can have chateaubriand(actually fillet steak) or lobster as part of your all inclusive one night, because they’re refurbishing;
We took the free bus left to a nearby beach (Playa del Cura) from where you could catch a local bus elsewhere. We also took the free bus to Mogan - odd that it has to go 10 kilometres the wrong way each way because of a lack of slip roads by Taurito - on arrival it’s 20 minutes walk to the marina, but it’s worth it with pretty waterways between the harbours and beautiful plants and bougainvillea around. The bus was 20 minutes late picking up but gave us an extra 45 there. Enjoyed it and took lots of pictures. The walks around our hotel have been limited by health and safety - apparently you used to be able to walk up to where the coastal road to Mogan had collapsed and also go to the top of the hills opposite the hotel. Now you can’t but you can from the Mogan side?!
We were unlucky with the weather during the start of our stay, warm but some rain - but then hot and sunny for the remainder. Only had one real sunset.
Love the sound of the waves and the lit hotel lifts opposite on an evening.
We had to leave at 07:45 for our 11:35 flight back! - breakfast opens at 7:30 but will open earlier if you request the day before - don’t do it though as they just give you an awful clingfilmed plate with a muffin, chocolate roll, cheese & ham sandwich, wafer biscuit and three margarine tubs - suggest you make yourself a proper sandwich and take some fruit the night before. The internet was mostly good but seemed to die at times and completely went a couple of times and you had to re-log on sometime later.
Seen some of the other comments on trip advisor- yes too many thoughtless chain smokers; sun beds are plentiful and packed in but it’s the fixed umbrellas that limit any flexibility; tables at meals are close, but no more than any other hotel; lots of nationalities here; we prefer using the stairs, but the lifts are good if you feel the need; entertainment was ok to poor to just walk away - the singers in the afternoon were better; there are black, silver and gold bands but little information on what the differences are and the upgrades don’t seem worth it; the whole site is exceptionally well cleaned;

This review is the subjective opinion of a Tripadvisor member and not of TripAdvisor LLC.
View more reviews
PreviousNext
1…262728…
<script type='text/javascript' cr