Didn't live up to expectations! - Review of Ramada by Wyndham Marcoola Beach

US$111
US$88
View deal
Booking.comUS$98
Hotels.comUS$111
CheapTicketsUS$111
View all 19 deals
Prices are the average nightly price provided by our partners and may not include all taxes and fees. Taxes and fees that are shown are estimates only. Please see our partners for more details.
Wanderlustwhartons
Perth, Australia
5

Didn't live up to expectations!

Mid week getaway, kid free, we thought we'd treat ourselves! Guest service was very average and after mentioning we were staying for a special occasion there were no complimentary upgrades. Instead we got a dusty room which was stuffy, noticeably stained carpets and hard/ high pillows which were not comfy. The thing we liked most was the lagoon style pool and remote roll up blinds in the room!! Probably wouldn't stay there again.More

Dear Wanderlustwhartons,
Thank you for providing feedback on your recent experience with our team at Ramada Marcoola. It is pleasing to hear you enjoyed our beautiful lagoon style pool area. I am sorry your were disappointed with the Hotel style room you had reserved, we have a range of accommodation options to suit the needs of all guests and our friendly team is available at all times to ensure our guests enjoy their holiday with us. We hope you will return in the future, I am confident we will exceed your expectations.
Kind Regards,
Damien Larkin
General Manager

Report response as inappropriateThank you. We appreciate your input.
This response is the subjective opinion of the management representative and not of TripAdvisor LLC
See all 953 reviews
Nearby Hotels 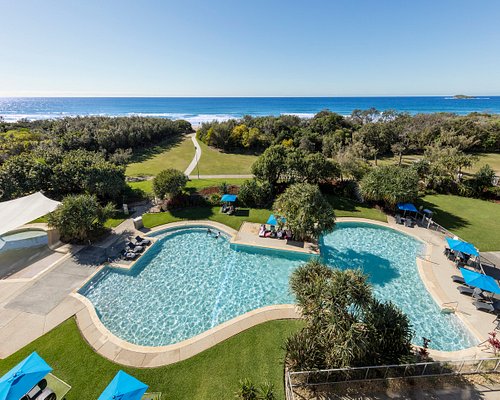 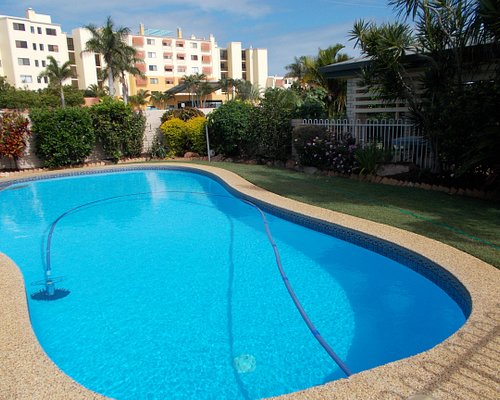 Sunshine Coast Airport Motel
US$148
US$140
Booking.com
View deal
Expedia.com
US$140
Priceline
US$148
Hotels.com
US$140
View all 17 deals from US$140
67 reviews
0.3 km from Ramada by Wyndham Marcoola Beach
We compared the lowest prices from 17 websites 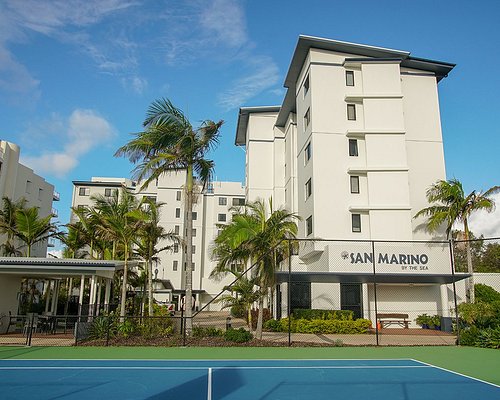 San Marino by the Sea

Stay here a lot but getting too expensive for the size & quality of hotel room. Badly stained carpet and squeeze tight room at around $180pn just too much! The saving grace was pool temp which had chill off it otherwise I wouldn't stay.

Dear Nannaccazza,
I am sorry your Hotel Room did not meet your expectations. We often have some fantastic offers for discounted stays available, I recommend keeping an eye out for these deals and booking well in advance to secure the best available rates. We offer a range of accommodation options to suit all guests needs. It is great to hear you enjoyed our large heated pool. We hope to see you back again when you next decide to holiday.
Kind Regards,
Damien Larkin
General Manager

Report response as inappropriateThank you. We appreciate your input.
This response is the subjective opinion of the management representative and not of TripAdvisor LLC
Molly542
Main Beach, Australia
6047
Reviewed 9 October 2021
A must stay

we stayed in a one bedroom apartment. It was very clean and well laid out.It was wonderful to hear the sound of the surf. Excellent location for the beach shopping restaurants. Staff were welcoming and professional. Highly recommend the Soul Spa. Amazing staff well qualified and fab treatments offered. Great Bistro and Bar enjoyed a sunset cocktail. Really enjoyed a relaxing break. Looking forward to another stay.

This review is the subjective opinion of a Tripadvisor member and not of TripAdvisor LLC.
Pioneer28560409041
Brisbane, Australia
1
Reviewed 16 September 2021 via mobile
Cleanliness of room and disappointing service

My husband and I stayed at Ramada Marcoola Beach for two night, great location. Unfortunately it was a major disappointment, nothing like what we expected when we booked in description and pictures especially for the high price. We have stayed in many places that were cheaper, much cleaner and comfortable. Our room had an unpleasant smell and there was a dirty blanket that smelt of urine in the wardrobe and the odour of the blanket wafted through the cupboard and bedroom. The sofa was filthy with dirt and scuff marks on it. We advised the receptionist about our concerns, she apologised but did nothing to help fix our issues. Especially in these times, cleanliness is a high priority, the room was not cleaned to appropriate standards. The pool area was nice but we will not be staying there again especially at $239 per night. Very dissatisfied and a disappointing 2night stay.

Thank you for your review. We are very sorry to hear that you did not enjoy your visit to us here at the Ramada by Wyndham, Marcoola Beach. We consider the cleanliness of our guest rooms and public areas to be of the upmost importance, especially in times such as these, and have shared your feedback with our Housekeeping Manager as a training opportunity to ensure that we are consistently delivering on our guest's expectations. We do hope that we will be able to welcome you back to the property in the near future, so that you can see that this was an unfortunate anomaly, and this was not up to our usual high standards.

Report response as inappropriateThank you. We appreciate your input.
This response is the subjective opinion of the management representative and not of TripAdvisor LLC
I1660QXandrewm
Robina, Australia
134
Reviewed 1 August 2021 via mobile
Don't waste your time or pleasure as you will be disappointed.

So we as a family was excited to go on our family holiday which we hadn't been able to do for quite sometime. We got to the resort to only find out that we can't leave our room due to covid snap lockdown. I am really disappointed that no one from owner service or the resort didn't contact us to tell us this would be happening as if we knew this in advanced we would of never of come but it was only the next day that we get a call saying that they want to confirm we checked in or not. Wasn't very happy. Asked if we would be able to get some compensation due to this situation and they said no. What a joke.

Before we could check in we went to the resorts bar and restaurant to only be disappointed with the food being either dry and either over or under cooked.

Finally our room was ready. As we walked into our apartment the lifts in the North tower smelt like cigarette smoke. Then as we entered our room it was nothing like the photos to be honest. When I booked the 3 bedroom apartment I was expecting aircon throughout which isn't the case. You really can't say its a 3 bedroom. It's the worst designed apartment as you can see in the pictures. Walls are dirty and tired looking. The roof vents in the bathrooms are full of dust and crap. The bedding is quite dated. I was under the impression the Levies we pay would keep these up to date and modern which isn't the case. We have stayed in alot of wyndham properties and love them all but this is the first time being at this one and would is a complete let down. The dryer is dusty and full of lint.

Won't be coming back to this resort ever again unless they do a hard renovation. Also the internet that they provided has a faster upload speed then download which I can't understand why as we continually had issues with the speed not being fast enough to watch a YouTube video. Probably the worst situation when you can't leave your room and they don't have a movie Channel to hire movies or quick internet connection to stream. You phone only gets 1 bar with Telstra due to the concrete construction and thick walls.

Room tip: I would try to avoid unless they do a major renovation. You can get way better places for the same price. Also if you like jets flying over through the day.
Trip type: Travelled with family
Ask I1660QXandrewm about Ramada by Wyndham Marcoola Beach
1  Thank I1660QXandrewm

Dear Andrew,
I am sorry you have been disappointed with your experience at Ramada Resort Marcoola. I will contact you directly to resolve your concerns. Our team are always available to assist our valued guests to ensure everyone has an enjoyable holiday with our friendly team.
Kind Regards,
Damien Larkin
General Manager

Report response as inappropriateThank you. We appreciate your input.
This response is the subjective opinion of the management representative and not of TripAdvisor LLC
saraheparke
Palm Cove, Australia
87
Reviewed 31 July 2021 via mobile
Room above a drunk car park

We stayed for one night, we arrived to the hotel and got our room which smelt of strong chlorine and the head board had lint dust and someone else’s hair on it. We were moved room into the Centre tower. The room had the view of the car park which was fine. The toilet kept emptying and refilling all night making horrible noises we eventually had to turn the water off to make it stop. The air con made the room warmer then it was outside so we couldn’t use it. At about 10:30pm there were serval groups of loud and aggressive drunks in the car park that yelled consistently smashing glasses, screaming, fighting and carrying on until 2am making sleep impossible even with all doors and windows closed. There was a security guard at the south wing that did nothing and did to calm the situation, or move the drunks alone. I had to go out and ask them to move along and please be quiet. I was met with profanity and the noise did not stop which is when I called front desk to see if they could deal with the long standing matter.
After all of last nights events we opted to forgo morning activities to try and get a sleep in, only to have renovations on our floor a few rooms down start at 7:30am. Banging hammers and moving furniture.
We got a voucher for the restaurant for the inconvenience. The restaurant staff were not helpful or friendly, and walked around looking at the ground I had to take my plate to the chefs window after waiting for someone to help.
As parents we don’t often get a chance to get away and we were looking forward to relaxing and getting some much needed rest which was very far from what we got. The hotel was clean and nice for what you pay, the hotel staff where nice and helpful, but I would not stay here again.

Dear Sarah,
I am sorry you experienced some shortfalls with our service on this occasion. Our team are available 24 hours a day to assist with any guest concerns including noise to ensure everyone enjoys a good nights sleep. I will contact you directly so that we can resolve your concerns.
Kind Regards,
Damien Larkin
General Manager