Hotels.com
eDreams
Snaptravel
View all 9 deals
Prices are the average nightly price provided by our partners and may not include all taxes and fees. Taxes and fees that are shown are estimates only. Please see our partners for more details.
imthecraziestdude
Singapore, Singapore
224207

Spacious and beautiful place! A lot of facilities and lovely restaurants!

I like that place since its located at the center of Uluwatu and spacious beautiful surroundings!

food and drinks were on a good level too! But the staff could be more helpful and maybe friendlier!

I got confused with the checking in at the front deck and It wasnt easier after that since our room was far away and believe me, it takes time to find the way back If you are not staying near the entrance!

So when the place is huge and low season you should expect a better service. If you dont get that - you will feel like at the ghost town. It was empty but staff looked extremely busy with something so we felt abandoned at the huge castle !

How can we get there? staff replied: you go straight and turn left and showing you a round direction. I was: straight? from where? etc..... i was laughing. but anyway - hotel was nice. When It gets full - gonna be even better!

Show less
Room tip: near the front desk
See all 552 reviews
Nearby Hotels 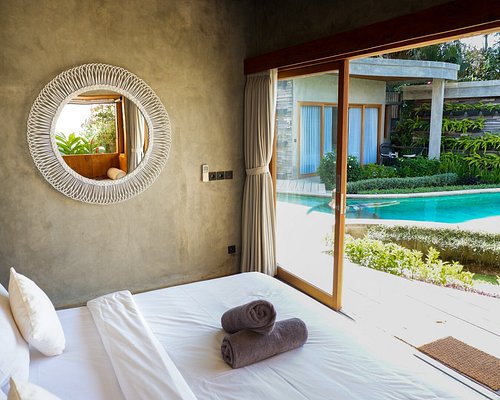 Breakfast included
The Elementum
US$54
Tripadvisor
View Deal
Pay up to 12X
Snaptravel
Hotels.com
US$54
Expedia.com
US$54
View all 14 deals from US$54
63 reviews
1.5 km from Le Grande Bali - Uluwatu
We compared the lowest prices from 14 websites 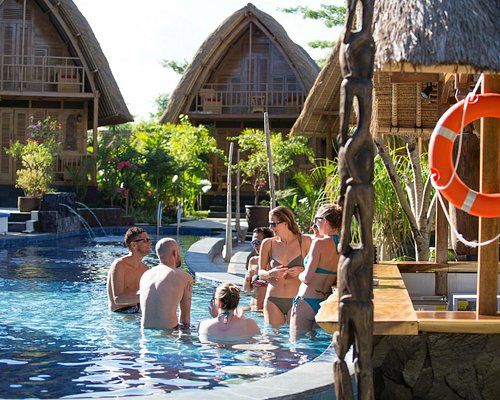 Expedia.com
View Deal
Snaptravel
Agoda.com
US$56
Travelocity
US$75
View all 12 deals from US$56
309 reviews
2.1 km from Le Grande Bali - Uluwatu
We compared the lowest prices from 12 websites 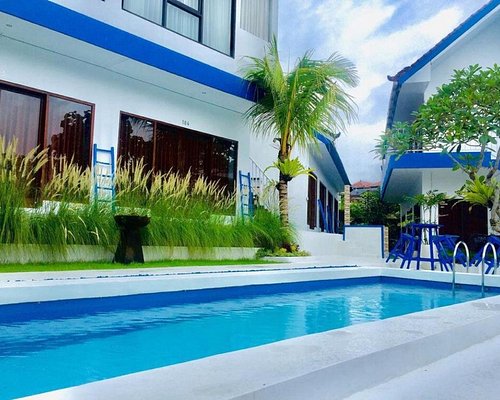 Hotels.com
View Deal
Pay up to 12X
Expedia.com
US$25
Agoda.com
US$26
Trip.com
US$27
View all 11 deals from US$25
325 reviews
2.4 km from Le Grande Bali - Uluwatu
We compared the lowest prices from 11 websites
Wyndham Dreamland Resort Bali
US$47

Hotels.com
View Deal
Pay up to 12X
Expedia.com
US$169
Agoda.com
US$163
Travelocity
US$169
View all 14 deals from US$163
93 reviews
2.0 km from Le Grande Bali - Uluwatu
We compared the lowest prices from 14 websites
Breakfast included
Uluwatu Cottages

Expedia.com
View Deal
Snaptravel
Trip.com
US$25
Hotels.com
US$43
View all 13 deals from US$25
240 reviews
4.3 km from Le Grande Bali - Uluwatu
We compared the lowest prices from 13 websites
Breakfast included
Uluwatu Lumbung Cottages
US$303
US$140

Fantastic stay. We were given a free upgrade to a Huge suite on arrival by the lovely staff. Fantastic spa treatments provided by Ani and her colleague. Great food in the restaurant and amazing facilities.

This review is the subjective opinion of a TripAdvisor member and not of TripAdvisor LLC
Wndyyp123
1
Reviewed 29 March 2020
Good food and nice hotel, perfect for a stay-in hotel

F&B: Breakfast was good. We like to check out various breakfast buffets at Bali hotels and would say the breakfast standard was of a higher quality than what we had at Royal Tulip Pecatu, Swissbel Sanur and The One Legian Kuta, and about the same as Mercure which boasts a consistent high standard. We took the Nyepi package which includes a daily premium tea with savoury and sweet snacks, the chocolate cake was to die for. This lasted us till dinner, which didn't have all that much variety being Nyepi but each dish was prepared so well we found it more than adequate. (We have previously been disappointed with hotel buffets over Nyepi, even those who "specialise" in buffet meals). Our package also included a one time free mini bar (several cans of beer and soft drinks, a pop mie and a small pack of chips) which we found a good touch. There was also a one time free beer at the pool bar. F&B wise the hotel had thought through everything guests might like, right down to infused chilled water and cookies at check in, and I would give them full marks!

Entertainment wise, there was a Gym which looked very adequate though I didn't use it, Ping pong, Table soccer. Lounge beds in gazebos by the pool if the deck chairs were too sunny. There are 3 separate pools: 1 for toddlers which was next to the main, large lap pool, and a third smaller lap pool which was in the shade all day except for an hour or so in the morning, which the pool access rooms access to. Just to note if staying over Nyepi that the hotel is quite strict with the Nyepi rules: sitting quietly by the pool on nyepi day while permitted is "not encouraged", neither is using of lights in the room. Don't even think of going for a jog around the hotel grounds, let alone the golf course attached.

Room and grounds: Large, modern and well equipped room. There are limited Pool Access rooms but do note that it accesses to the secondary pool which is in the shade most of the day except maybe 2hrs in the morning. So while we had booked the Pool Access room, we spent most of our time at the main pool as it was warmer and more cheerful. Some reviews I came across commented that the grounds were not well maintained, but I actually found it alright and more pleasing in its more natural state rather than looking too manicured.

Our only disappointment was that when booking we had specifically requested a "Double bed", but when we checked in we were told that we had requested twin beds. When we clarified that we had requested a Double Bed, we were told that there were no Double Bed configurations available, because "rooms were limited". They asked if we were okay if they placed two single beds side by side instead which we accepted but when we got to our room we realised that this was a ridiculous suggestion because the bedside table was in the centre and could not be moved due to wires and cables attached. The hotel had placed the two beds in front of the bedside table which not only meant that there was no headboard or backing so pillows kept falling over the top of the bed at night, it also meant about 2 feet less of usable space making the room feel cramped. To make matters worse, we saw that there was a Double Bed room right next to us that was empty throughout our stay. We conjectured (but can't say for sure) that the staff might have made a mistake in our room allocation but rather owning up and giving us the option to wait while they prepped the correct room (which we would have since we were staying more more than a night), they just told us there were no more rooms available. If this was indeed the case it is very disappointing service attitude for a hotel in this class. Perhaps management can look into this matter. Another option would be for the hotel booking website (I booked through its website) to have separate options for "double" and "twin" rooms like is done on Agoda and other booking sites, rather than leaving it to request. This way the customer will know upfront whether his preferred room configuration is available and can decide whether or not to go somewhere else if it's important to him.

Thank you for your review and for choosing our hotel. We are looking forward to having you again as a guest in our hotel. Regarding for any problem, we have sent your feedback to the personnel concerned.

Report response as inappropriateThank you. We appreciate your input.
This response is the subjective opinion of the management representative and not of TripAdvisor LLC
Cduque1985
Canggu, Indonesia
31
Reviewed 26 March 2020
1 star solely for the staff

First impression : run down. First room we got smelled like mold like really bad and we asked for a different room they said there was none even though the hotel is empty. They said they would put aromatherapy (aka a candle with scent diffuser) to make the smell go away. Somehow there was magically another room but we needed to wait an hour .. no problem / we went to the restaurant where the food is small portions and well.... average. Second room smelled much better - went to plug in phone dead roach on the nightstand. Then live roach in the shower... etc etc. bathroom was leaking from the roof. Spa was not comfortable or appealing but Ani was very sweet and Gave a great massage. Pool was ok and so was the staff (especially Kadek by the pool bar). In other words, had an Ok time but this is far from a 5 star hotel as it is marketed.

We hope this notes finds well. We have sent your feedback to the personnel concerned. We apologize for this bad experience. This is very disappointing to hear, but we hope you give us another chance to make it up to you. Please let us know if you want to discuss this personally.

Report response as inappropriateThank you. We appreciate your input.
This response is the subjective opinion of the management representative and not of TripAdvisor LLC
artha_budi
152
Reviewed 8 March 2020 via mobile
What u pay is what u get

Nothing special.
Water was yellowish
Floor in room was broken.
Garden was not Well-maintained
Children's play ground was not managed.
Breakfast was just average
The good thing was the bellboy was willing to help and friendly.

Thank you for your candid feedback. We are very sorry to hear that your stay at the hotel was not up to par. Please note that this information has been passed on to our concerned staff. Despite this, we hope to be able to welcome you back on a return visit to Legrande Bali.

Report response as inappropriateThank you. We appreciate your input.
This response is the subjective opinion of the management representative and not of TripAdvisor LLC
Aqua D
Melbourne, Australia
609
Reviewed 22 February 2020 via mobile
Superb chilled place

Great place for quiet relaxation.
Very well designed spacious . Breakfast was good. Staff were amazing.
Its probably 5 years old? and the only thing was the lamps in the rooms either rusty or dirty not good look.
It was value for money

Dear Guest,
Thank you for choosing to stay with us and we are glad to hear that your stay with us was a memorable one! We look forward to welcoming you back to the hotel in the near future.
Kind Regards,
Le Grande Bali management & Team.

Report response as inappropriateThank you. We appreciate your input.
This response is the subjective opinion of the management representative and not of TripAdvisor LLC
View more reviews
PreviousNext
123…92