Stayed here last weekend.
Chose it because of its convenient location, located at the Taipei Train station with underground direct access. Not a problem even if it rained. It would be best if you would travel to other parts of Taiwan by highspeed train or the outskirt of Taipei. But if you are only spending time in Taipei city centre, its neighbourhood could be a bit dull for you. I would recommend the hotels near Taipei 101 for that matter.

We booked the premier room because its newly renovated. We were upgraded to a premier suite. Much bigger room with a nice couch between the bed and the TV. Would not call it a suite exactly, there was no living room or bedroom. They are all tucked together. Still it is a bigger space than an ordinary premier room.

The bathroom is huge with bath and shower separated, not sure if it is the same in ordinary premier room.

Staff are quite helpful and informative. Just that they kept talking to us in Japanese while we were from Hong Kong. But we did see a lot of Japanese tourists here too.More 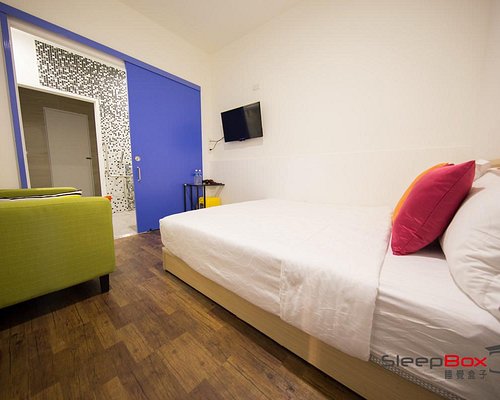 Taking safety measures
We compared the lowest prices from 9 websites

Hotels.com
View deal
Travelocity
FindHotel
US$29
Expedia.com
US$45
View all 13 deals from US$29
3 reviews
0.1 km from Caesar Park Taipei
We compared the lowest prices from 13 websites
Y Hotel Taipei
US$56

Priceline
View deal
Free cancellation
Agoda.com
US$40
FindHotel
US$41
Etrip
US$41
View all 11 deals from US$40
277 reviews
0.1 km from Caesar Park Taipei
We compared the lowest prices from 11 websites
York Hotel

Hotels.com
View deal
Travelocity
Agoda.com
US$56
eDreams
US$64
View all 11 deals from US$56
91 reviews
0.1 km from Caesar Park Taipei
We compared the lowest prices from 11 websites
NYS Loft Hotel

Expedia.com
View deal
Hotels.com
Agoda.com
US$34
eDreams
US$40
View all 15 deals from US$34
109 reviews
0.1 km from Caesar Park Taipei
We compared the lowest prices from 15 websites
14% less than usual
Sponsored
Fun Inn Taipei
US$18

Expedia.com
View deal
Hotels.com
Agoda.com
US$63
eDreams
US$85
View all 12 deals from US$63
86 reviews
0.2 km from Caesar Park Taipei
We compared the lowest prices from 12 websites
Top Rated
CityInn Hotel Plus - Ximending Branch

Expedia.com
View deal
Hotels.com
Orbitz.com
US$123
ZenHotels.com
US$220
View all 15 deals from US$123
512 reviews
0.9 km from Caesar Park Taipei
We compared the lowest prices from 15 websites
Just Inn Taipei Station

We stayed at this hotel during Oct 2-5. We purchased in advance a premium room. But the staff cheated us and gave us a superior room. Later we complained and the supervisor noticed that we found out the truth, we were finally arranged to have a "true" premium room. What a shame it is for a 5-star hotel (despite having a recognition of her services)!

Other comments:
Do agree with other reviewers that this hotel has a very good location, and indeed some of her staff offer very good services.

This review is the subjective opinion of a Tripadvisor member and not of TripAdvisor LLC.
troyzilla
104
Reviewed 3 October 2012 via mobile
Location is awesome - rooms not so much...

The hotel has direct subway concourse access (M6 exit - note there is about a dozen steps) and as such has direct access to the underground mall and cheap eats. The hotel itself is ok - our 14th floor room had a view of the office building next door. Beds are very firm and the bathrooms are very dated but functional. The roof "pools" are now koi ponds though there is a spa on level 6. The view from the roof is jawdropping - amazing night view over the main station and towards the 101. Would I stay again? Yeah - but I'd opt for an executive (newly renovated) room.

This review is the subjective opinion of a Tripadvisor member and not of TripAdvisor LLC.
VZed
Auckland, New Zealand
4369
Reviewed 1 October 2012
Would come again!

Fantastic location! I had to go to Taipei on short notice for a quick 3D/2N stay. Chose this hotel because I knew I would be running on a tight schedule from the airport and had to find a hotel near Taipei Main Station. This hotel can be accessed directly from the underground at B1 level though it might not be easy to find the correct exit. Basically, whichever direction you come in from, just find your way to the MRT and find exit M6. The street exit and the underground access are both in the same direction. The best way to get to thus hotel from the airport is by bus, destined Taipei Main Station. Once you get off at the station, the hotel is opposite the hotel on Chung Hsiao Rd West. Getting to the airport is similarly by bus at Taipei Main Station West side Tower A (next to MRT exit K12). I stayed at a premium room which had a separate check-in area and the staff were fantastic. Their English was also very good and they spoke Japanese as well. Though my bathroom sink leaked at first, they were quick to fix it within an hour. Staff were friendly and helpful with tips and suggestions on where to for food and sightseeing. The rooms were on the small side but it was enough for two people and the bathroom was a bliss. I loved the rainshower. Another plus: free wifi in the room! Will stay here again if they have rooms when I go to Taipei again later this year.

This review is the subjective opinion of a Tripadvisor member and not of TripAdvisor LLC.
ooncindy
Singapore
4340
Reviewed 9 September 2012
Good base to explore Taipei - would stay here again

Location is the best thing about this hotel, being smack right in the centre of the transport hub. Easy to get around Taipei city too as it is linked to the interchange station for 2 subway lines. Rooms are clean and decor is trendy. Although not very spacious, it is sufficient for 2 persons. My room package did not include breakfast so I could not comment on the quality of the breakfast in the hotel. What I can comment is the quality of breakfasts available around the hotel - there are many places serving great and value for money breakfasts near the hotel, hence it is not necessary to include breakfasts in hotel package.

The only negative comment on the hotel is the smell of cigarette smoke along the corridor. I asked for a non-smoking room and was told that the whole hotel is non-smoking. Obviously some of the guests ignored that but the hotel could have done better with freshing the air. Thankfully the smell did not permeate into the rooms but it was unpleasant when we had to get in and out of our room.

This review is the subjective opinion of a Tripadvisor member and not of TripAdvisor LLC.
mskmouse
Singapore
2040
Reviewed 26 August 2012
Excellent Location

The hotel is conveniently located above the Taipei Main Station. Excellent base to explore Taipei. We were pleasantly surprised to be upgraded to a suite without any extra charges. Although the hotel is a bit old, we appreciate the cleanliness. It was a comfortable stay for all of us. Worth paying a bit more for convenience and comfort , especially with elderly parents and young children. :)

This review is the subjective opinion of a Tripadvisor member and not of TripAdvisor LLC.
View more reviews
PreviousNext
1…949596…