Home away from home

Thank you for your amazing review and kind words.

It is delightful for us to hear that your recent stay with us was so enjoyable and that all aspects exceeded your expectations. Your kind words will be passed on to the team.

We look forward to welcoming you back soon. Please stay safe.

With our best wishes we remain,

Report response as inappropriateThank you. We appreciate your input.
This response is the subjective opinion of the management representative and not of TripAdvisor LLC
See all 2,950 reviews
Nearby Hotels 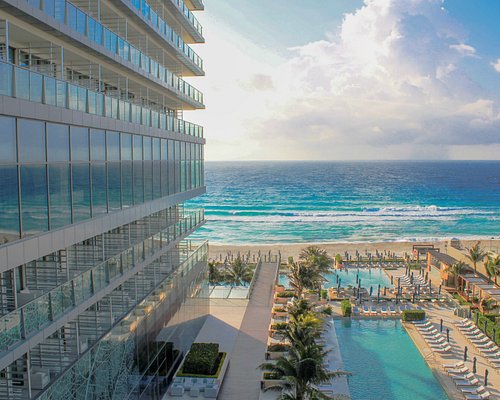 All Inclusive
Secrets The Vine Cancun
US$479

Taking safety measures
We compared the lowest prices from 18 websites
All Inclusive
Iberostar Selection Cancun
US$265
Iberostar.com
View deal
Booking.com
US$311
Trip.com
US$205
Priceline
US$239
View all 19 deals from US$205
6,783 reviews
8.5 km from Hotel Riu Palace Las Americas

Beautiful resort and very friendly staff who are willing to help you! The resort was SUPER clean and you definitely felt safe staying there during these Covid times. Food was good but not great somethings were undercooked and somethings were over cooked, but for the most part the food was good. I would definitely go back and spend another week there, it was an awesome time. I do feel like the rooms could use a pop of color like some paint, but rooms were clean and so were beds!

Review collected in partnership with riu.com
This business uses tools provided by Tripadvisor (or one of its official Review Collection Partners) to encourage and collect guest reviews, including this one.
Ask Randall6609 about Hotel Riu Palace Las Americas
Thank Randall6609

Traveled to RIU Palace Las Americas in February for the 3rd time and it did not disappoint. Was a little concerned with Covid but this hotel really stepped up and took priority in the safety of its customers.
We were greeted at front desk with mimosas and friendly faces. Our Covid tests were scheduled at that time to alleviate any concerns about it for the duration of our trip. Our tests went quick and easy and with no problems. We had arrived early in the day but with the hotel only at partial capacity our rooms were ready and waiting.
Restaurants were all no waiting the entire time we were here and food was good. There were 2 in our group that are really picky and we never went hungry. Shout out to Edgar in the the buffet restaurant. He spotted us every time we walked in and knew our names and what we liked to drink. He was our waiter of choice our entire trip. The other restaurants were good also but our group preferred the variety of the buffet.
Rooms were clean and comfortable and mini frig was restocked each day.
Entertainment was on point...Much is to be said about a great entertainment staff. There were activities all day and in the evenings and they kept the enthusiasm going. Quite a comical group. Only recommendation would be more shows involving the guests and less of the dancing shows...especially on consecutive days. We missed shows such as the Michael Jackson, Mr RIU, and Rock of Ages shows from the past.
All in all was a great trip and I would recommend for anyone who is looking to have a good time. This hotel is not for someone who likes to be all sophisticated and snobby But for people looking for a fun trip.
Met a large variety of people from different places and made a lot of new friends.

Thank you very much for your positive feedback!

It was a pleasure for us to be your host and it makes us happy to know that you have felt comfortable during your stay with us.

Our director and our team thank you for the excellent rating and your words of praise.

We hope you visit us again soon.

Report response as inappropriateThank you. We appreciate your input.
This response is the subjective opinion of the management representative and not of TripAdvisor LLC
Ohiotravler5150
32
Reviewed 4 March 2021
Average at Best

Was super excited to stay at this hotel, but I have to say, I was disappointed with the quality of the hotel as a whole. Upon my arrival, the outside of the hotel was beautiful, so was the lobby, but the reception where check in was conducted took upwards of 45 minutes to check me in, in a process that felt way too long. The room was sub par, with a musty, almost mildew like smell, not to mention the room safe didn't work, and maintenance had to come and fix it twice. Additional downfalls of this property included the cleanness of the rooms, which seemed fair at best, I didn't really want to step on the shower floor, because it just felt unclean. The shower sprayer was also gross, with orange gunk on it, and the hot water was either extreme or cold...no in between. Restaurants at the hotel were ok, the food was bland and seemed to have very little taste. Shows on site at the hotel were just ok, they were a bit boring to be honest. On a positive note, the staff at this resort is awesome, while they can't fix the issues mentioned above, they do go above and beyond to a degree to make then customer happy. Also, they resorts outside pool section was very nice, with a very nice pool area, and a beach that did have some clear water. On a side note about the beach, it was 3/5 at best, their was several pieces of landscaping that was coming up and just looked trashy, making one section of the beach unusable. I actually left a day early because I was having a bad time, which put a damper on my trip as a whole. Overall, I wouldn't stay at this resort again, it was definitely NOT 5 star quality, and should be updated.

Thank you for choosing Riu and taking the time to share your review.

As much as we are happy to read your kind words about the professional service of our staff and the modern design of the hotel´s building, we regret that there were some issues during your stay that made your vacation less pleasant.

We are also very concerned by your comment about cleanliness as our absolute priority is to offer our guest a clean, safe and comfortable stay in our hotels. Please rest assured that we will follow up on your comment in case our strict protocols have not been properly met on this occasion.

We are looking forward to welcoming you again at one of our worldwide premises and change your perspective into a more positive one.

With best wishes we remain,

Report response as inappropriateThank you. We appreciate your input.
This response is the subjective opinion of the management representative and not of TripAdvisor LLC
FDXCHAD
1
Reviewed 28 February 2021
Super Nice and Clean

Loved this property. We were super impressed with how much they kept the property clean. They were consistently spraying and using a UV light to disinfect. Staff was super friendly and any issues that we had(which were minor) were addressed promptly.

Review collected in partnership with riu.com
This business uses tools provided by Tripadvisor (or one of its official Review Collection Partners) to encourage and collect guest reviews, including this one.
Ask FDXCHAD about Hotel Riu Palace Las Americas
Thank FDXCHAD

Thank you so much for your kind words and feedback, it is truly appreciated.

Your good time is our satisfaction, and we are delighted to know how much you enjoyed your stay!

We look forward to hosting you again. Until then, all the best!

Report response as inappropriateThank you. We appreciate your input.
This response is the subjective opinion of the management representative and not of TripAdvisor LLC
MLBogert
Lee's Summit, Missouri
3726
Reviewed 24 February 2021
Excellent Service and Beautiful Hotel

We stayed in a Junior Suite Oceanview room 252. The room was excellent, with my only negative comment being that if you stay on the 1st-3rd floors, on the west side of the hotel (where we were) you have a chance at getting a partially obstructed view due to the hotel next door. We still had a great view of the ocean and enjoyed our time on the balcony.

The service at this hotel is excellent. Service at all front desk, restaurants, bars, at the pool and entertainment venues were all top notch. The beach areas are a little cramped, but I think that's the case at most of these resorts. There are 3 pools, but really only had traffic at one of them while we were there. I'm sure in non-COVID times, the pools all start to fill up.

My only real complaint about this hotel would be the food. You do have a lot of options for eating, but most of the food is average at best. We ate at all the restaurants except for the Japanese restaurant (only because it was closed when we wanted to eat there). The biggest disappointment of them all for us was the steakhouse (Black & White). I ordered the 12oz ribeye and my wife ordered the filet. My ribeye was possibly the worst ribeye I've ever eaten. It's never a good sign when a ribeye comes out about 1/2" thick, but it was also very rubbery and had a weird texture. My wife's filet was ok, but nothing to write home about.

Overall, though, I still rate this hotel excellent because the positives far outweighed the negatives. The nightly entertainment was pretty good and the bartenders always did a good job of taking care of us. Of course, we tipped ($1 a drink), which probably helped in that regard, because I saw most people not tipping, but it was well worth it.

Bottom line...I would definitely come back to this resort.

Thank you for taking the time to share your review!

We are so thrilled to hear you enjoyed your visit to our property and would be glad to welcome you back for another fabulous stay!

Report response as inappropriateThank you. We appreciate your input.
This response is the subjective opinion of the management representative and not of TripAdvisor LLC
View more reviews
PreviousNext
1…789…492