More than One - Review of Pans Guest House

It seems as though Mr Pan has more than one guest house. The one I stayed in was across the road from his restaurant and had a couple of floors of rooms.
The room was very small with a small window facing into another building. Take plenty of bug spray as there were plenty of bugs in the room.

Breakfast was in the restaurant across the road and was pretty basic even by Laos standards.

Trip type: Travelled as a couple
See all 111 reviews
Nearby Hotels

Expedia.com
View deal
Pay up to 12X
Hotels.com
US$25
Priceline
US$23
CheapTickets
US$25
View all 11 deals from US$23
144 reviews
0.2 km from Pans Guest House
We compared the lowest prices from 11 websites 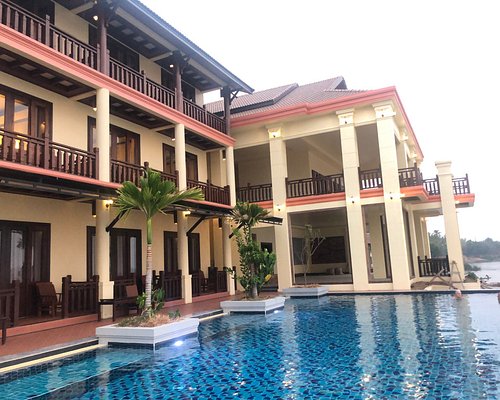 Good location - quiet with a river view from our balcony (we paid extra for this). We had room number 8. Rooms were a little tired but comfortable. There was hot water and the rooms were cleaned every day. Tea and coffee in the room + a fridge and a/c. I felt it was probably a bit expensive for the standard provided - we booked 2 nights via booking.com and then tried to extend our stay. There was no reduction for booking direct - and at first they said yes to 2 more nights and then on the final night we had to move to another hotel altogether (this room was not very nice - but with leaving early in the morning and not wanting to move again we agreed to stay there). Breakfast was across the road and although not luxury, seemed to work sufficiently well (for Laos). I was disappointed not be able to lie in the hammock on the balcony as it was much too cheap and uncomfortable. As others have said - lots of insects and creatures everywhere - including the room - not a problem, but be prepared.

This review is the subjective opinion of a Tripadvisor member and not of TripAdvisor LLC.
lbeniamino
Juillac, France
7419
Reviewed 16 March 2018
very disapointing

comfortable with nice breakfast and dinner, however extremely noisy ... a group of 10 Dutch people dared stay on our balcony from early in the afternoon until late at night...though they had rooms on the ground floor.
They were loud and we couln't sleep until 3.00am...

Room tip: Too noisy. The owner never checked if everything was OK...he has 3 other places intown
Ask lbeniamino about Pans Guest House
Thank lbeniamino

This review is the subjective opinion of a Tripadvisor member and not of TripAdvisor LLC.
Holdypaw20
London, United Kingdom
21887
Reviewed 25 February 2018 via mobile
Great little bungalows

We stayed here for 5 nights after the nightmarish journey down from Kong Lor. The wooden bungalow we stayed perched on the river bank with a little private balcony equipped with hammock and chairs. Unfortunately our Aircon broke on the first night so they helpfully moved us into a free bungalow with working AC. The shower was hot and the bed was really comfortable (with mozzy nets provided). Be prepared for a very insect filled stay due to the close proximity of the river but it's fine if you have decent bug spray. The included breakfast was nice with a choice of set menus and coffee/tea/fruit/orange juice. It was one of the better included breakfasts we have encountered in SE Asia. If you are staying on Don Khon I would highly recommend this place.

This review is the subjective opinion of a Tripadvisor member and not of TripAdvisor LLC.
Bever007
Arnhem, The Netherlands
21587
Reviewed 4 January 2018 via mobile
Good but maybe a bit expensive

We had a bungalow with garden view (as it was the last bungalow in the row we also had river view ;)). It’s a small room with just enough space for you luggage, but we didn’t consider this as a problem. The bed was comfortable and the room clean and that’s what matters more.

The bathroom was very small. The water was very hot but there wasn’t enough pressure. For a room with a nightly rate of 25 USD we think this is the major con.

However, we would still recommend and come back. Staff are friendly and helpful, breakfast is adequate/good.

This review is the subjective opinion of a Tripadvisor member and not of TripAdvisor LLC.
Trav53
Eastbourne
158133
Reviewed 31 December 2017
Pan's Bungalows

In a prime position, just 2 minutes walk from the boat dock - up the street from the boat dock and then turn right. It is adjacent to Pan's Residence which is under the same management - from what I heard and could see it would seem that Pan's Bungalows are better.
Of the 10 bungalows, only 3 of them (numbers 8.9 and 10) have direct views over the Mekong and number 8, which I was lucky enough to have, had the least vegetation between it and the river.
At the equivalent of $32 (US) a night it was a bit expensive but it gave me everything that I wanted. The bungalows are sturdily built and well furnished. No noise from outside or next door during the night. There was a mini-fridge and the bathroom was of a good size with a good shower. There was a limited selection of toiletries and there were tea and coffee making facilities.. There was air-con and a fan and a mosquito net which wasn't needed. There was no TV but I wasn't expecting one. The private veranda was a good size and had a table and fairly comfortable seating. The WiFi connectivity was a bit erratic but usually good. The staff and the owner were friendly and efficient and you can do all your travel booking with them. There were a number of choices for breakfast and I had the tasty omelette every morning along with a baguette.and slightly too small portions of butter and jam.
Nearby there are mini-marts souvenir shops, bicycles for rent and a number of eateries, including the much-mentioned Lao Long Restaurant with its good food and dreadful service.
Were I to return to Don Khon(e) I would certainly consider staying again at Pan's Bungalows - and I don't say that about too many places!!

Room tip: Best views of the Mekong are from Bungalows 8. 9 and 10
Ask Trav53 about Pans Guest House
Thank Trav53