“Great Escape”
N01CXzNfVG9L
other travellers have booked this property 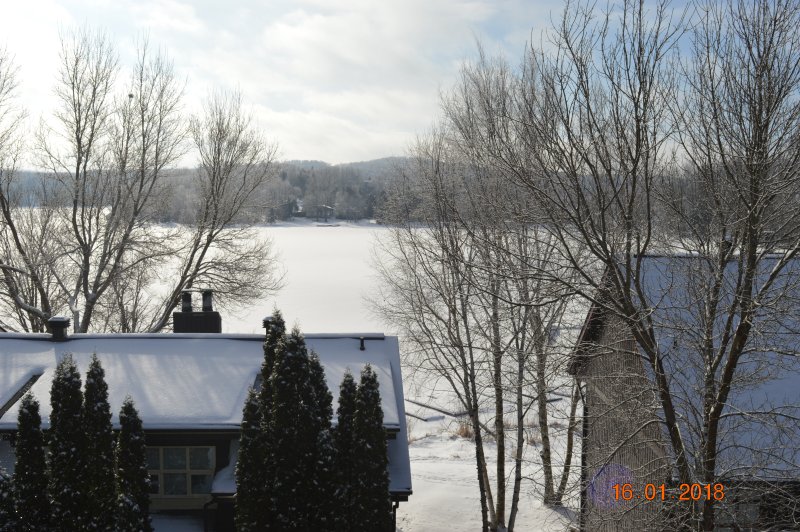 Bookings for this home are first-come, first served. Lock in your dates before they are gone 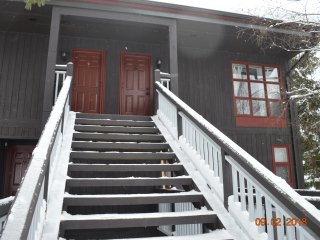 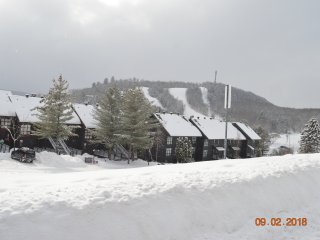 This property is not available for these dates.
Don't give up! Enquire about other rentals just like this one that are available -

Send to a friend

Excellent - based on 4 reviews
Write a Review

Hidden Retreat is perfectly located just outside of Huntsville and close to other lovely little towns like Dwight and Dorset and the well-known and beautiful Algonquin Park. The condo was comfortably furnished and has two balconies (and upper off the master and lower off the main living space) with views overlooking the lake (a great spot to read and relax). It was a nice "surprise" to find that towels and bedding were provided along with some of the "basics" (paper towel, dish soap, etc.). The master suite was large/spacious and offered and en-suite plus lots of storage (and a washer and dryer)! The second bedroom on the first floor is "cozy" and nicely appointed however there is no storage whatsoever (no closet or dresser). This wasn't an issue for us (just two of us), but it might be a "challenge" if the second bedroom was being used. The owner gets FIVE stars for communications (very responsive to messages and/or questions -- we had two during our stay, both concerning the TV/cable). While there are four VERY tight visitor parking spaces fairly near the unit, the only other "guest" parking is quite a hike up a very steep hill. We were given the option of using the lower level garage parking, but it is shared space and while we were there, the person parking next to us had angled their vehicle in such a way that we chose not to try and wedge ourselves into the garage. Also, you have to walk up a long flight of stairs (outside) to get from the garage level back up to the stairway leading up to the condo. The condo has great views because of it's location, but because of it's location, there are a lot of stairs! I had only three "disappointments"; the first was that it was clear upon arrival that the surfaces that one would expect to be "well cleaned" (kitchen counters, dining table and coffee table in the living room) were not clean. During these CoVid times, that should be the #1 most important thing along with my second "concern" which was that most of the cutlery looked as though it had (perhaps accidentally) been put away dirty as there were knives and forks with food debris stuck on them. My only other issue was the oven which, when I tried to use it just once, began smoking because (apparently) there was a large spill or accumulation of spills from other uses that had not been cleaned. I mentioned the cutlery and the oven to the owner as a courtesy (how can anyone know what's wrong if you don't tell them?), but never got a response to that particular message. Overall, it was a great rental and my only recommendation (having rented properties of my own), is to make sure the cleaning service/person is doing a more thorough job.

Date of stay: October 2020
Would you recommend this hotel to a friend?   Yes.
Was this review helpful? Yes
This review is the subjective opinion of a Tripadvisor member and not of TripAdvisor LLC.
Problem with this review? Thank you. We appreciate your input.

We all had a great time!! Wonderful location Fantastic condo! Very Clean.. owners are amazing! The Beach .. the pool..beautiful scenery! All.you can ask for. Owners get back to very quickly with any questions or concerns !

Date of stay: July 2018
Was this review helpful? Yes
This review is the subjective opinion of a Tripadvisor member and not of TripAdvisor LLC.
It was a pleasure having you. Hope to see you next year
This response is the subjective opinion of the management representative and not of TripAdvisor LLC
Problem with this review? Thank you. We appreciate your input.

I was pleased to find this type of accommodation up in Huntsville. Good and clear instructions were sent to me (feel bad for printing too much...). We found all we need in the condo with the exception of the coffee grinder ( made a trip to Canadian Tire in Huntsville to buy one and have a stop to the famous Kawartha ice cream shop). I was nicely surprised to have the access to the resort's pool and sauna (within walking distance). The resort offers snow shoes to rent. The place has an indoor garage and also extra parking outside. The beds are comfy and clean. I found one annoying thing: the light switch in the bathrooms turn on the loud fan as well, waking up all the people in the night. Definitely, we will return if it's available.

Date of stay: February 2018
Would you recommend this hotel to a friend?   Yes.
Was this review helpful? Yes
This review is the subjective opinion of a Tripadvisor member and not of TripAdvisor LLC.
Problem with this review? Thank you. We appreciate your input.

1
person found this review helpful
Date of stay: August 2019
Was this review helpful? Yes
This review is the subjective opinion of a Tripadvisor member and not of TripAdvisor LLC.
Problem with this review? Thank you. We appreciate your input.
Updating list...
Do you own a holiday rental? List it here.

Extra income
Earn money by renting out your home. With no up-front fees and no contract, you keep more for yourself.

Easy to manage
Confirm bookings in one click and track everything from enquiry to check-out – even while you're on the go.

Trusted by travellers
With millions of reviews and protected online payments, Tripadvisor helps travellers book your home with confidence.
Set up your free listing

Looking for a place to stay in Huntsville?
View all 32 holiday rentals