US$99
US$82
View deal
PricelineUS$88
Radissonhotels.comUS$89
getaroom.comUS$99
View all 20 deals
Prices are the average nightly price provided by our partners and may not include all taxes and fees. Taxes and fees that are shown are estimates only. Please see our partners for more details.
cerijessie
swansea
2020

Nice stay in the city centre

Enjoyed our stay at the Raddison Blu. Lovely clean room with great views from the two windows across the city.

Breakfast was good too with a buffet style with the usual items.

Only issue was the late check out. Husband was running a marathon nearby so we paid £20 for a 2 hour later check out. I went out came back and was locked out of the room. Had to go 18 floors back down to reception. Got into the room , 30 mins later the cleaner was coming in. Explained we were checking out later. 30 mins later reception were calling asking why we hadn’t checked out. Not worth the £20 for the hassle!More

We apologise for the disappointing service you received from our staff. Our team works hard to make sure our guests are comfortable and receiving our best service. We appreciate you bringing this matter to our attention, and hope for another opportunity to exceed your expectations in the future.

Report response as inappropriateThank you. We appreciate your input.
This response is the subjective opinion of the management representative and not of TripAdvisor LLC
See all 3,152 reviews
Nearby Hotels 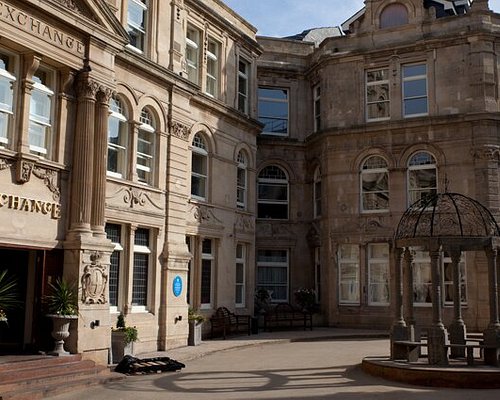 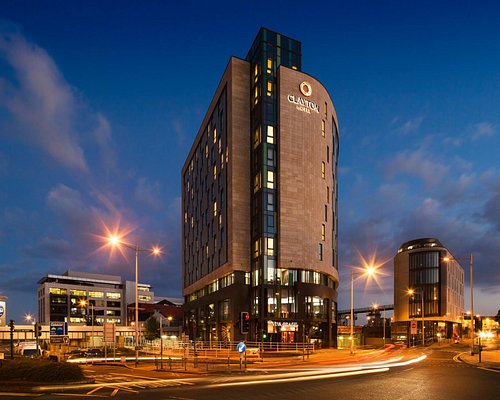 Hotel Indigo Cardiff, an IHG hotel
US$122
Booking.com
View deal
Free cancellation
Expedia.com
US$122
FindHotel
US$116
getaroom.com
US$137
View all 17 deals from US$116
864 reviews
0.6 km from Radisson Blu Hotel, Cardiff

Taking safety measures
We compared the lowest prices from 17 websites
The Coal Exchange Hotel Cardiff
US$119
US$96
Booking.com
View deal
Expedia.com
US$119
Hotels.com
US$119
FindHotel
US$107
View all 11 deals from US$96
993 reviews
1.4 km from Radisson Blu Hotel, Cardiff

I booked this hotel for 27/05/22 before Ed Sheeran tickets were released. Since they were released the price of Cardiff Hotels have doubled.

Radisson Blu cancelled my reservation, due to over booking! In other words they can now get a lot more for the room.

No compensation offered! Really bad service! Will not use this chain again!

You have the wrong hotel, as you have already been advised on the telephone, your reservation was not reserved here at the Radisson Blu Hotel Cardiff. There are two other Radisson Hotel Group properties in the City of Cardiff.

Report response as inappropriateThank you. We appreciate your input.
This response is the subjective opinion of the management representative and not of TripAdvisor LLC
Carol C
Carmarthen, United Kingdom
108
Reviewed 7 November 2021
Very disappointing

We have stayed here many times pre covid & always thought it was good value for money; comfortable & convenient. How disappointed we were this time. Our room was ok - smaller than usual whilst prices have almost doubled. Everything was cut back to a totally unacceptable level - one teabag in a double room for instance which was not replaces so our second day we had none: the tissue box was empty when we arrived and not refilled for our second night either, the empty loo roll was not replaced etc. breakfast was also very poor - the coffee which used to come in a pot is now out of a machine and was undrinkable, the cooked food was over cooked, the eggs like rubber (reminded me of the ones you buy in joke shops) and the selection of breads and pastries very limited. For the price charged it was disgraceful. All together it felt as though the hotel was offering the very least it could possibly get away with at a budget hotel; not the standard you would expect for the price we paid and far inferior to what we have had there before. We will not be staying there again and would certainly not recommend it to others. Such a pity having always enjoyed it before.

Dear Carol C,
We apologise we were not able to provide you with the quality of services you deserve. This is uncharacteristic of our hotel and staff, and we are always looking for ways to improve our customer experience. Your satisfaction is very important to us and we try hard to make sure all of our guests have a rewarding stay. Our Executive Team is reviewing your comments to ensure they are used to improve our guest's experience. We hope you will consider staying with us in the future. We'd love to have you as our guest to ensure you have the best travel experience.

Report response as inappropriateThank you. We appreciate your input.
This response is the subjective opinion of the management representative and not of TripAdvisor LLC
Caroline W
Reading, United Kingdom
124
Reviewed 7 November 2021 via mobile
Comfortable stay if a little noisy

My daughter and I have recently stayed at the Raddisson Blu hotel.

I was a little worried after booking and seeing the reviews.
Check in was swift and easy.

Our room was on the 6th floor it was a big spacious room with a King bed.

Room was clean with a few marks on the carpet as you came into the room.

Bedding was clean and bed was comfortable- pillows where not so comfortable!

Room had tea, coffee making facilities and a fridge which was hardly to store our drinks to keep them cool.

Also had a hair dryer and iron in the room.

Lots of lights the lamp on the desk had a red shade on it which didn’t give off much light.

Bathroom was very big and looked like it had been recently refitted. Everything was very clean and towels in the bathroom were fluffy and large.

My only negative point was our room over looked the railway line and road and it was noisy.

Checkout the next morning was quick and simple.

Dear Caroline W,
Thank you for taking a moment to share your experience. I am pleased to hear you found the service from our front desk team to your liking. We look forward to welcoming you back to our hotel in the not too distant future.

Report response as inappropriateThank you. We appreciate your input.
This response is the subjective opinion of the management representative and not of TripAdvisor LLC
MrandMrsinManchester
Sale, United Kingdom
76110
Reviewed 3 November 2021
Rude service, no bar/restaurant, no early check in. Not up to the Radisson brand.

I stayed at the Radisson Blu in Cardiff about 7 years ago, and had a great experience. So I asked my employer if I could stay there again on a return work trip to Cardiff. What a mistake. The entry to the hotel is a temporary awning, and dirty with men standing outside and smoking. I arrived at 1.30pm and was told my room wasn't available until 3pm. I waited in the lobby to meet a friend, and there was a constant stream of people trying to check in, and being told they couldn't check in. So the lobby was full of tired people, some of whom had just come off long flights, hanging around until 3pm.

The hotel's coffee shop, bar and restaurant were closed, so this is clearly not a 4* hotel at the moment. I was told by the receptionist to go to a nearby pub if I wanted a coffee. A manager? (none of the staff were wearing namebadges) spotted me waiting and asked if I was OK. When I said, I would have expected my room to be ready by now, he got annoyed and told me off, saying that they have deep cleaning on a Wednesday so the rooms arent ready until later. However, I saw people being turned away on the Thursday and Friday if they tried to check in before 3pm.

When I returned at 3.30pm, there was a long queue to check in.

The room was fine but cold as the air conditioning unit did not work.

The soundproofing is truly terrible. I could hear conversations coming through my wall from the room next door. Bring earplugs if you want to stay here.

Breakfast was sub-Premier Inn standards. A limited selection of food on the buffet. Hot drinks only available from a coffee machine, one of which was not working. The staff member who showed me to my table was not at all friendly.

Compared to the Radisson Blu on Mercer Street, or on in Bloomsbury, this hotel is a disgrace. There is no way it should be associated with the Radisson brand.

Dear MrandMrsinManchester,
We apologise we were not able to provide you with the quality of services you deserve. This is uncharacteristic of our hotel and staff, and we are always looking for ways to improve our customer experience. Your satisfaction is very important to us and we try hard to make sure all of our guests have a rewarding stay.
Our check in time is now 3pm that might be different than 7 years ago, as most of our guest arrives around 3pm especially weekends I am afraid we might have a queue.
Our bar and coffee shop is on the first floor which opens at 10am, you might see the one on ground floor which is closed but that should be informed you, please accept my apology on that.
We have not changed our room interior and walls regarding soundproofing, they are the same walls like 7 years ago when you have stayed.
We always get a great reviews regarding our breakfast which is Radisson Blu standards I am really sorry that you did not feel that way and please accept my apology regarding the team member who did not give you great service.
We hope you will consider staying with us in the future. We'd love to have you as our guest to ensure you have the best travel experience.

Report response as inappropriateThank you. We appreciate your input.
This response is the subjective opinion of the management representative and not of TripAdvisor LLC
thehonestreview2010
Birmingham, United Kingdom
2311
Reviewed 3 November 2021 via mobile
No Real Wow Factor...

It's ok, nothing special, no wow factor.
Simple things... couldn't adjust room temperature. Bulb blown in bathroom. Towel rail didn't heat up.
Coffee mug stain on gold table in living area, not cleaned properly. Carpet had bits on it as though it needed a good vacuum.
Staff friendly, decent breakfast.

Please be assured that your feedback has been fully reviewed and taken very seriously, I would like to personally assure you that the necessary steps have been taken to address these issues and to ensure that they do not reoccur. There appears to have been multiple obstacles and complications throughout your time with us and I fully acknowledge the impact these shortfalls will have had. I have already shared the feedback with the senior team, to ensure that individually the appropriate action is taken.

Report response as inappropriateThank you. We appreciate your input.
This response is the subjective opinion of the management representative and not of TripAdvisor LLC
View more reviews
PreviousNext
1…456…