Nice, in general, but issues that shouldn’t be happening in a hotel like this. - Review of Aquabella Hotel & Spa

US$365
Free cancellation until 22/05/22
Reserve now, pay at stay
View deal
TripadvisorUS$365
getaroom.com
Traveluro
StayForLong
Expedia.com
Hotels.com
View all 19 deals
Prices are the average nightly price provided by our partners and may not include all taxes and fees. Taxes and fees that are shown are estimates only. Please see our partners for more details.
Jellybean6210
Oak Hill, West Virginia
1

Nice, in general, but issues that shouldn’t be happening in a hotel like this.

Nice, in general, but there are issues that shouldn’t be happening in a hotel like this.
I went to the spa, there were no towels. The floors were dangerously slippery and I almost fell 4 or five times. The locker locks didn’t work. The Jacuzzi was cold. There were no regular showers where you could get hot water that you adjusted. Overall not very pleasant. Additionally the bathroom outlet in my room pulled right out of the wall exposing bare wires. The glass shelf for toiletries was falling off the wall and slanting so that you could not put anything on it without it slipping into the sink, including my full coffee cup. Otherwise the room is great with nice amenities in a very pretty location.More

Many thanks for sharing your experience.

Be assured that all our teams will pay necessary attention to all the points fingered out.

Just concerning the towels, you have them already in the room and you can ask services to change them if need be.

Report response as inappropriateThank you. We appreciate your input.
This response is the subjective opinion of the management representative and not of TripAdvisor LLC
See all 1,535 reviews
Nearby Hotels 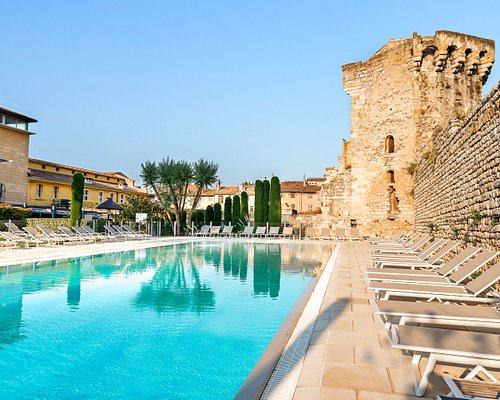 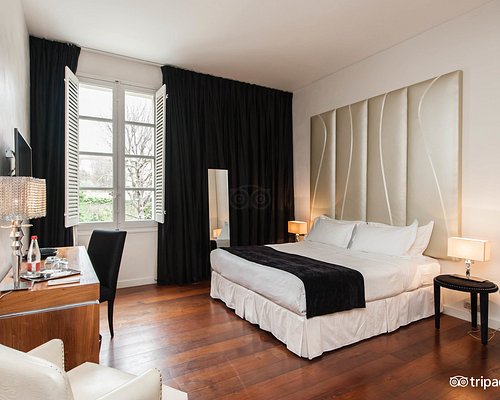 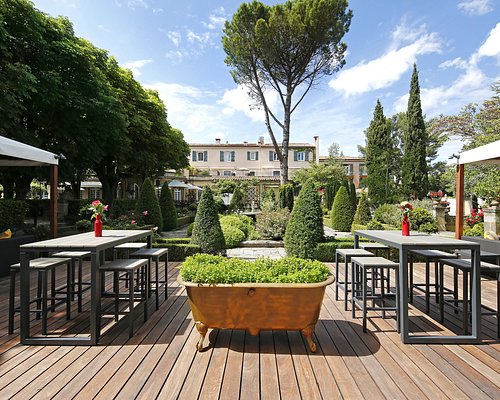 Expedia.com
View deal
Pay up to 12X
Booking.com
US$657
ZenHotels.com
US$652
Priceline
US$695
View all 19 deals from US$648
591 reviews
0.6 km from Aquabella Hotel & Spa
We compared the lowest prices from 19 websites
Top Rated
Les Lodges Sainte Victoire

Expedia.com
View deal
Pay up to 12X
Hotels.com
US$161
Travelocity
US$161
Trip.com
US$161
View all 10 deals from US$161
29 reviews
7.2 km from Aquabella Hotel & Spa
We compared the lowest prices from 10 websites
Breakfast included
La Ferme

Amazing place close to the fringes of the old town. 5 - 10 min walk to most places. Great restaurant and Spa. But most of all great staff. We had trouble with changing rules to get back to our home country and the staff at the reception (I didn’t take the lady’s name unfortunately) was most helpful in taking time to secure us an appointment in Avignon, a job that was beyond her expected duties.

So in short a great relaxing place close to the city centre with parking and exceptional staff. Highly recommended.

Thanks again for your reservation in our hotel.

We are happy that you spent a nice stay amongst us.

Your feedback is very helpful and encouraging for our teams.

Report response as inappropriateThank you. We appreciate your input.
This response is the subjective opinion of the management representative and not of TripAdvisor LLC
Betty L
Marblehead, Massachusetts
4231
Reviewed 9 September 2021
Really nice hotel & fabulous restaurant!

We spent 3 days in Aquabella on a business trip and had a very nice stay. Rooms are clean and well appointed, pool is great, grounds are very very pretty, and staff is helpful and welcoming. Great location and very quiet.

Room tip: Some of the rooms had balconies; ours didn't but our view was good.
Ask Betty L about Aquabella Hotel & Spa
Thank Betty L

Dear Guests,
Thanks again for your reservation in our hotel.
We are happy that you spent a nice stay amongst us.
Best Regards
Gana GUEYE

Report response as inappropriateThank you. We appreciate your input.
This response is the subjective opinion of the management representative and not of TripAdvisor LLC
scvitiello
Saint Louis, Missouri
264
Reviewed 27 August 2021
An oasis in scorching Provençal summer

During a spell of 100+ degree (Fahrenheit) heat, this hotel was a spot of cool tranquility where I could escape and rest. The room has great AC, which isn't a given outside the United States, and I slept well at night despite some noise from the street. The hotel is located near the Place des Cardeurs, which is full of restaurants and bars – so you're going to get some people wandering past the hotel late at night. The restaurant was great for both breakfast and dinner, and the pool was pristine. I also booked a few spa treatments, and I'm glad they were able to fit me in! The spa was the highlight of my trip. Not only was it incredibly relaxing, but it is a unique spa in that all of their treatments center around water. I believe this is because the hotel is built on the ruins of old Roman thermal baths, which have been preserved and you can see pieces of the baths behind plexiglass in the spa. Very nice spot, and it's so close to the center of town!

Room tip: The hotel has four floors, so if you want to be on the top floor for less noise, the fourth floor is the one to request!
Ask scvitiello about Aquabella Hotel & Spa
Thank scvitiello

Dear Guests,
Thanks again for your reservation in our hotel.
We are happy that you spent a nice stay amongst us.
We hope we will have the pleasure to see you in this period or another for a nice stay again.
Best Regards
Gana GUEYE

Report response as inappropriateThank you. We appreciate your input.
This response is the subjective opinion of the management representative and not of TripAdvisor LLC
Pauline W
Liverpool
2111
Reviewed 1 March 2021
Extremely helpful during Covid

I did not get to stay at this hotel as we are UK based and had to eventually cancel my booking due to covid. I can say that the Customer services for this hotel were excellent both in communication and providing a refund without any delay.
My reason for the trip was for a wedding which had to be cancelled but if and when it gets booked again I would love to visit this hotel as the staff who I have communicated with are all great and the hotel looks lovely - thanks

It is a real pleasure to read your nice feedback.

Be assured that service is our main preoccupation and we are happy that you appreciate it.

Thanks again for your kindness.

Report response as inappropriateThank you. We appreciate your input.
This response is the subjective opinion of the management representative and not of TripAdvisor LLC
CGBu
Copenhagen, Denmark
3253
Reviewed 6 August 2020
Nice hotel but lack of service

A 1 night stay at this 4 * hotel. A nice room refurbished with a fine duble bed and a big bathroom, but it all had some lack of things. There were no information in the room about the hotel services such as breakfast hours, possibilities of having served food or drinks in the room, phone numbers, Spa prices and hours etc. In the bathroom the shower was not effectively covered with glass protection so the water was spread out on the floor and no place to store your shampoo when showering. The check in and out at the reception was made by 2 persons only, of which one of the all the time was on the phone or doing other things but serving the guests. So you had to wait quite some time for this service. They had a P-park nearby but with no direction instructions at the reception. The pool area was nice but fairly crowded and you could only get towels at the reception so you had to walk back to this and stand in line again. The towel service should have been near the pool area. We did not use the restaurant as the menu was quite ordinary
but the breakfast buffet was very fine, but the staff was not well organised as there was a lack of tabbles prepared for you and you had to call the staff to get everything you needed, glass, serviette knives and forks etc. The hotel is though nice situated just a short walking distance from the old town center. As for prices it was much too high for this standard. The management should deal with all of this before you can call a stay 4 *.

Thank you very much for your stay in our hotel.

We have paid great attention to your feedback and we wanted to answer some of the points you raised in.

Concerning the room we took out all the documents to avoid contacts and this information is clearly given during the check-in and noticed in document at the reception desk. We will remind our colleagues to be most informative on that point.
Also during your stay our staff is there to help for any request.

As for towels for the pool, we have made the choice to give them at reception ; we know by experience the difficulties it represents to let them there.

For the restaurant it is a pity that you did not use it ; it is all renovated and until the reopening on july 10th, guests who have really been there unanimously congratulate our chef and restaurant team.

Be assured that everyday we are on the field and our single preoccupation is to give service.

We know that all is not perfect but our services are mainly appreciated by most of our guests. Aa a reminder, we have 85% occupancy at least every year.

We take into consideration any comment that may help us improve our quality of service. You are our mirror.

Thanks for taking your time.