StayForLong
Expedia.com
Hotels.com
View all 10 deals
Prices are the average nightly price provided by our partners and may not include all taxes and fees. Taxes and fees that are shown are estimates only. Please see our partners for more details.
Netteiffo
55

Holiday with the family. The hotel is a 3-4 star. Lovely position right on the beach but you can’t really swim in it. They have 3 pools. One overlooking the beach. My personal negative would be that smokers mainly can smoke anywhere.
The accommodation is nice and clean just a bit dated. The restaurant is good just needs a toaster that toasts at breakfast time.

Trip type: Travelled with family
See all 827 reviews
Nearby Hotels 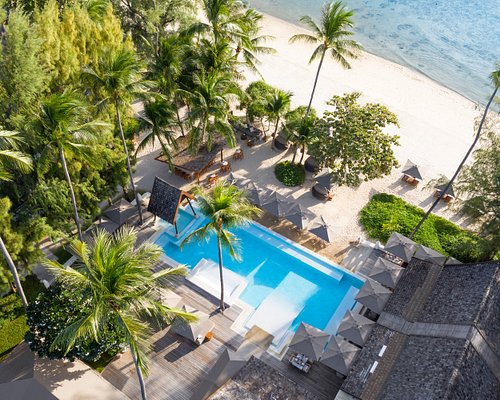 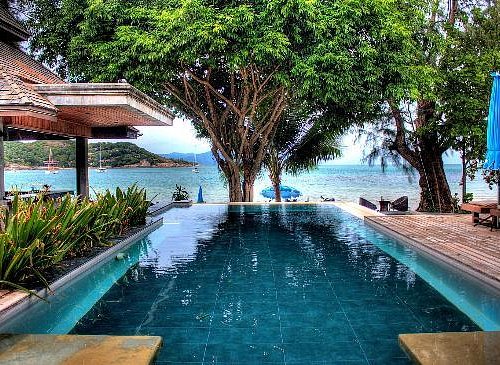 Hotels.com
View deal
Travelocity
FindHotel
US$33
Expedia.com
US$46
View all 14 deals from US$33
154 reviews
2.1 km from Deva Beach Resort Samui
We compared the lowest prices from 14 websites

Orbitz.com
View deal
Expedia.com
US$41
Trip.com
US$33
Hotels.com
US$41
View all 14 deals from US$33
45 reviews
1.8 km from Deva Beach Resort Samui
We compared the lowest prices from 14 websites
25% less than usual
Sponsored
Moon Cottage
US$38

The photos on booking.com give the wrong impression.
The people working in the hotel are nice however the senior management, of course unavailable are not. I had to leave early due to very urgent family issues. I asked for a refund but was told NO. I offered to pay double the price for the limited time i had been there but NO. The general manager who would not come to talk to me has zero regard for his guests and absolutely no sympathy. I lost £3000.
The hotel is terrible. Everywhere is like an unkempt jungle, enjoyed only but millions of mosquitoes.
I was in one of their premier rooms, a grand pool villa. Entrance to this villa was down a dirty overgrown pathway. See photos.
The buildings are falling apart and are dangerous. High possibly of timber falling off and maybe onto you.
The hotel is so overpriced it is almost a joke, if i was not paying for it.
Spa ... well no spa actually. Permanently closed.
Resort ... implies beach and activities. Beach yes but you cannot go into the water. Only 1ft deep with a very rocky bottom. Certainly no swimming.
I have never been so negative about a hotel before, but in this case the hotel is such a disgrace i have to say my piece.
PLEASE DON'T GO. It is the only way to make them understand.

This review is the subjective opinion of a Tripadvisor member and not of TripAdvisor LLC.
soulminer74
Ballarat, Australia
710
Reviewed 5 October 2019
Okay but had issues

A difficult prospect reviewing this place. A lot to love - a lot to be frustrated about.
We stayed in the Grande Deluxe Pool Access Room. Awesome room and highly recommend this if you stay. A real bonus having the pool right there. 7pm cut off time for swimming was a bit disappointing though. Pool was nice and clean. Room was great. Daily housekeeping awesome. Housekeepers beautiful and friendly and always did a perfect job.
It is a very quiet place to stay. Nothing really happens here. Would not recommend the food or drinks here. Insanely expensive! On par with or even more expensive than Australia. Crazy. A real shame and so disappointing. One day I strolled to the beachfront to see a big sign saying "HAPPY HOUR". So thought OK cool. Had a couple of drinks. Exact same high prices. Not a very happy hour. These kinds of things made me feel flat about this place. I'd spent a lot of money for this accommodation but at times just felt flat being there.
The breakfast buffet was ok to start with. We were staying for 2 weeks (in hindsight a mistake) and we soon became very sick of the breakfast on offer as it was always the same. Eventually I began to skip breakfast here. Not very appetising.
The resort is far from any action. I knew this going in but i now realise i probably should not have booked 2 weeks here. Transport costs add up over time. A few nice places close by to eat and drink.
The staff here were so friendly and lovely. Always greeted with a smile. Beautiful people.
Upon leaving, my partner was flying out the day before me, resort charged her 200THB for lift to airport. The next day they tried to charge me 400THB. I said no too expensive and ended up using NaviGo App (200THB). The receptionist did not care that much and didn't really try to help me with this transport. Bit disappointing and didn't make me feel very good.
It wasn't all bad. I did enjoy my stay. The pool access room was great. It just fell flat in a few areas and i felt disappointed. It is a very relaxing place to stay and many will absolutely love this resort. Things like "distance" is not Deva's fault, that is my mistake. But do some deals on drinks at least! If you advertise a "happy hour" - do some deals on drinks! Those prices are crazy.
Overall probably a 3 and a half out of 5 for me.

This review is the subjective opinion of a Tripadvisor member and not of TripAdvisor LLC.
Shellipop
Stoke-on-Trent, United Kingdom
3341
Reviewed 30 September 2019
Good hotel but mega expensive

Do not eat or drink in the hotel, its ridiculously expensive. Take a walk up the street and there is a restaurant with hood food.
Or get a taxi and go further afield to get drinks and food etc.
The hotel is lovely, and the pool on the beach also nice. The beach isnt great but they cant help that!
Great forastop over but move on quickly, nothing much here to do see.

This review is the subjective opinion of a Tripadvisor member and not of TripAdvisor LLC.
bluberi3
Villach, Austria
192
Reviewed 9 September 2019 via mobile
Everything was good

We stayed in Deva for 6 days.
We booked the Grand Deluxe room with Pool access.
Room was clean, bed confortable.
Breakfast was delicious, only the variations of breakfast was really limited. Staff was always smiling and really friendly.
What was not so good was the beach. One couldn't swimm in the sea.

This review is the subjective opinion of a Tripadvisor member and not of TripAdvisor LLC.
smilerduc
3
Reviewed 1 September 2019 via mobile
Nice but dirty

We arrived for our honeymoon and the hotel staff were very accomodating for our earlier than planned arrival, they were also nice enough to decorate the room with some flowers.
At this point i should mention we had a pool villa room.

We carefully removed the flowers from the bed before sleeping as to not cause any dying to the bed sheets. These flowers were placed in a glass where they then remained to go dry and mouldy over the next 10 days.
Initially we had 4 glasses and two small plates with cutlery along with a microwave. This would be fine for a quick snack as Thai meals can be small. However these were then all removed leaving us with nothing. There is a fridge and a lot of cupboard s but there are all empty....
The Room, bed and pool itself were nice but lacked any cleaning. The house keepers simply made the bed and changed the towels daily. By the end of out 10 day trip the floor and pool were discusting despite us making our best efforts to prevent this.
The floor inside the room and by the pool area is a hazard made up of rotten and warped wood, some areas felt as if you could easily fall through.
We reported an issue with the jacuzzi bath in the room not functioning correctly and being extremely dirty, this was ignored.

Moving onto the hotel areas.
Prices are hotel standard as you would expect so much higher than normal.
Food was poor and the menu limited, the wooden walk ways lack maintenance and are a hazard. The main pool by the beach has a poolbar but it is out of use, you must walk soaking wet to the main restaurant where if your lucky you might eventually get served but expect your bill to be wrong,they seem to make prices up as they go along and well as for happy hour....who knows whats going on there the prices vary so much.
Also dont expect a long lie as the resort is directly under the flight path with the first jet passing around 7am daily.
The beach is as described, its a nice view and pleasant to look out over.

When you check out the staff are happy to look after your cases untill your flight but as there is no air con area expect to blister in the sun for hours while you do so.

Oh there is also a dvd player in the room but no DVDs anywhere, so since there is no night entertainment atall in the resort suggest you bring something if you dont intend to go out.

In summary then this is a nice quiet location with a good view, hiring a moped is advisable if you want to get about and have freedom to do so.
Some tours are good but dont book through the hotel as we had no luck doing so.
If you have an an open mind and can put up with some filth then this place is ok.
The staff are generally very friendly and the reported issues seem to stem from management rather than individuals.
Not sure if we would come back though.