US$43
View deal
Free cancellation until 05/02/22
Reserve now, pay at stay
TravelocityUS$43
eDreamsUS$40
Trip.comUS$44
View all 15 deals
Prices are the average nightly price provided by our partners and may not include all taxes and fees. Taxes and fees that are shown are estimates only. Please see our partners for more details.
N1697WPvictoriad
Oxford, United Kingdom
1

I stayed with my daughter for 4 nights and after a noisy first night we were assisted by the very helpful Charlotte on reception who organised a move to a quieter, more comfortable room. The breakfast was plentiful and the staff were attentive.
We also ate in the bar one evening and the bar staff were very friendly and the food was hot and tasty.
Some rooms are noisy because golfers like to start early and some rooms seem to be more modern than others but even though we weren’t there to play golf everyone was friendly and helpful.
Location near the beach is great and also close to family that we were visiting so perfect for us. You could easily walk into the town centre from here.
If we visit our family again we will definitely stay here but will ask for a quiet room.More

Thank you for your lovely review and its nice to hear the team accommodated your during your stay wherever possible.

Its lovely to hear you will stay again and we look forward to when that may be.

Report response as inappropriateThank you. We appreciate your input.
This response is the subjective opinion of the management representative and not of TripAdvisor LLC
See all 737 reviews
Nearby Hotels 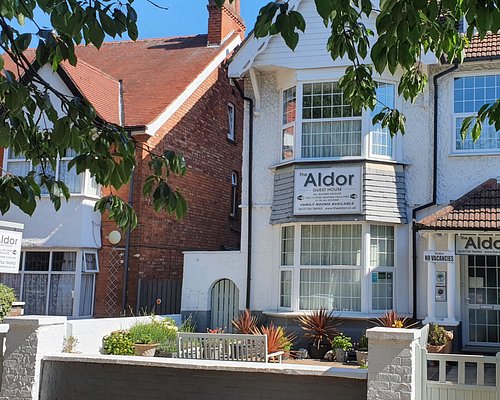 We booked an overnight stay to make the most of the 'just a few steps from the beach' location and had no interest in the golf course which is obviously the main draw.
We checked in early in the evening and were directed to one of three rooms in a lodge separate from the main building and headed out for a pre-supper stroll, so it wasn't until gone 10pm that we found that the promised free wi-fi didn't appear to exist - no network popped up, there was no info in the room about how to get connected and no phone to allow contact with reception. It wasn't worth tramping across the car park to try and find someone at that time of night, so we took it on the chin.
That wasn't the only issue, though - the flimsy loo seat was very loose and had to be used with care, with the fixings hidden behind panelling so they couldn't be tightened. The bathroom floor was clearly marked with the previous position of the toilet and there were signs of mould on the tiles and ceiling.
No shower mat was available despite the sticker on the wall giving guidance on how best to use one, and the drinks beakers provided were throwaway plastic. The drinks tray was a pretty poor affair - four teabags between two people for an overnight break is just cheap, not a biscuit in sight.
The room overlooked one of the greens so there was plenty of merry manly banter as players started their early morning rounds, as we checked out and reported the main problems there was a perfunctory apology but I didn't get the impression that anyone would be busting a gut to get things sorted, and as we left we cast an eye over what was on offer in the £9 breakfast and saw no reason to regret our decision to give it a miss.
On the plus side the beach is literally on the doorstep and the bed was big and comfy, but the many other niggles made us glad it was just a one night stay.

I am sorry to hear that you experienced some issues whilst here during your stay and I will look into the maintenance issues you have raised in regard to the room.

The wifi should extend to the lodge but again I will have our team look into this as it hasn't been mentioned to me before. We do have bath mats upon request and also other items such as hair dryers that we have removed from the rooms during the covid and as it is still very much around and even on the rise these are still available from reception upon request. This is detailed within the letter you would have received during checkin.

I am also dissapointed about your comments regarding our breakfast as this is a full buffet set up for the hot food and caters for all. Inside the restaurant you have a choice of cereals and fruit juice and tea and coffee delivered to your table upon your request, so I dont know what more you were expecting but their is a very good choice.

Report response as inappropriateThank you. We appreciate your input.
This response is the subjective opinion of the management representative and not of TripAdvisor LLC
5Oandmore
Market Harborough, United Kingdom
1
Reviewed 8 August 2021
Several very noisy rooms

All rooms overlooking the kitchen area are noisy most of the time , but especially so at night. Room 121 is exceptionally noisy & also has little natural light.
Most staff friendly & caring. Food well cooked.
Golf course well maintained.

Thank you for your review and valued comments which will be taken onboard and where possible or achievable, we will always look to improve our product and services to enhance future guest stays.

Report response as inappropriateThank you. We appreciate your input.
This response is the subjective opinion of the management representative and not of TripAdvisor LLC
Veronica T
2
Reviewed 7 August 2021 via mobile
Location is good but wouldnt chose to stay again.

Wanted local hotel to family event and this seemed to fit the bill. Located by the beach and golf course on site. Hotel is in need of updating. Relies too much on position so dated decor is hopefully ignored. Was told to ask when checking in if possible to do a late checkout, but this wasnt possible and little effort made to accommodate our request. Our room was in the lodge which might sound grand but should be avoided. Great if you are a hen party and need three rooms away from hotel., but it is ground level and security wise you may not wish to leave windows open. It is next to public road and easy access with no security as normally found when staying in hotel. On closing windows to walk up to hotel for evening meal, on return the room and bathroom smelt, so windows had to remain open all night. Was told it is referred to as the live shack......I called it the toilet block and interestingly it would appear I am not the first.

Room tip: Confirm with hotel when booking that you will be staying in main hotel and if you wish late checkout. Even if you book via booking.com, still check directly with hotel.
Trip type: Travelled as a couple
Ask Veronica T about North Shore Hotel and Golf Club
Thank Veronica T

Thank you for your comments in regards to our separate lodge rooms but sad to hear that it didnt meet your expectation this time. I can assure you that the rooms are very much secure and as we have a Night duty Manager based at the hotel from 10pm until 8am this forms part of their routine patrols throughout the night.

The rooms are in fact very spacious and are appreciated by many of our guests due to the direct parking outside the lodge and also the views over the golf course.

Report response as inappropriateThank you. We appreciate your input.
This response is the subjective opinion of the management representative and not of TripAdvisor LLC
dinnyjane1
Solihull, United Kingdom
53
Reviewed 17 July 2021
Can't think of anything good to say about it

We booked a double room but when we got there it was a twin. We went back to reception and were told that all rooms are twins but they would zip the beds together if we wanted them to. We declined. Dinner was a set menu and not very impressive at all, or we could eat in the bar. The receptionist said we could accept the room or go somewhere else. She didn't seem to care one way or the other so we declined the room, had a refund and left. Not impressed at all. We went to the Vines Hotel where it was cheaper and so much better.

Sorry to hear that your recent stay wasn't to the standard you were expecting. In regards to the double room that you booked I can only apologise that this wasn't correct upon you entering into your room as once the beds are joined they are transformed into a very spacious superking size and far more than the double that is paid for.

Also I am saddened to hear that you didnt find the food choice to your liking as the Dinner has a minimum of 3 choices for each course and the bar food is of a very good quality.

Report response as inappropriateThank you. We appreciate your input.
This response is the subjective opinion of the management representative and not of TripAdvisor LLC
joy C
Stourbridge, United Kingdom
11252
Reviewed 3 July 2021
Brilliant location

Room tip: sea view rooms 114 lovely but when a fan was switched in kitchen early I woke but did not bother my Husband or friends in 112 though
Ask joy C about North Shore Hotel and Golf Club
Thank joy C

thank you for your lovely and kind words and I will make sure my team see this review also.

Report response as inappropriateThank you. We appreciate your input.
This response is the subjective opinion of the management representative and not of TripAdvisor LLC
View more reviews
PreviousNext
1…345…