We were not disappointed. We were welcomed with big smiles by Anna and Enoch and shown to our well-appointed tents. We had booked for all meals to be provided by the lodge and the food was hearty homemade fare with delicious soup followed by main course and dessert! Thank you Anna. Our stay was great value all round.

Enoch was excellent at organizing our outings and we managed to do everything we wanted. We saw a stonefish, lots of lionfish and 3 eels, as well as lots if pretty fish while snorkeling the inland reef. We lobed the turtle tracking- an incredible 5km walk on a fully.moonlit night and we saw several baby turtles making their way to the sea. We loved the boat cruise- saw some spectacular birds on our way back after a sudden cloudburst (we got really wet!).

The facilities were great. We loved the outdoor shower at our tent. Fresh towels available. Fresh swimming towels provided every day. Nothing was too.much trouble. The.beds were very comfy. The bar at the main lodge was on an honesty system.

Will definitely be back. Thanks for an awesome time. We had lots of good laughs chatting to Enoch. By the way you definitely need a 4x4 to get down to the mouth-lagoon. You also need water shoes to wade across the lagoon at low tide to get to the beach. And for snorkeling the reef.More 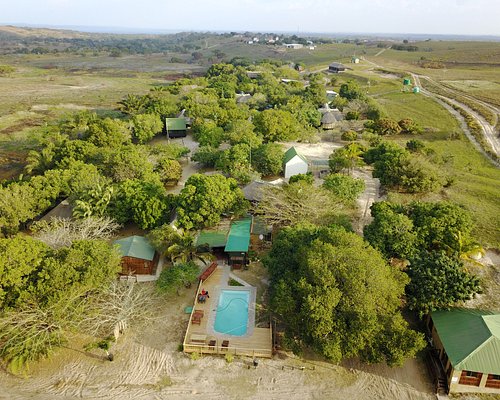 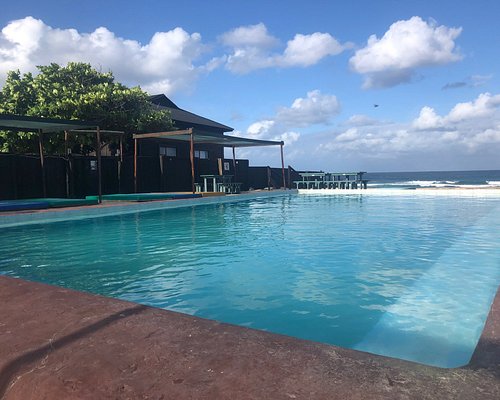 Breakfast included
Paraiso do Ouro Resort Budget Accommodation
US$115
Tripadvisor
View deal
Pay up to 12X
Hotels.com
Travelocity
Expedia.com
US$115
View all 8 deals from US$115
181 reviews
6.6 km from Kosi Mouth, Lodge & Camp
We compared the lowest prices from 8 websites

Without a doubt the hike was mystical and informative.
The energy of the staff and humbleness made this a very relaxing experience.
Without giving it all away one has to experience the adventure and beauty first hand

We camped for just less than 2 weeks for the first time at Kosi Mouth lodge, and we absolutely loved it. Amazing facilities and staff. Considering we had an issue upon arrival we still managed to enjoy every minute of our stay. Will definitely be back, hopefully sooner than later

This review is the subjective opinion of a TripAdvisor member and not of TripAdvisor LLC
Daydream402199
1
Reviewed 19 January 2021
Lovely treed sites with clean ablution facilities, each separated from one another with reed fences

Lovely location in close proximity to the beach and all the activities on offer. A well managed location with friendly staff. Very accessible to Ndumo and Thembe Elephant Parks and a quick hop across the boarder to Mozambique.
Groceries and fuel can be purchased at the closest village a few kilometers away. Comes highly recommended

Thank you for visiting us in Kosi and for your valuable review.
We look forward to welcoming you back soon ;)

Any photos you would be willing to share with us to use for marketing would be awesome ;)
info@kosimouth.co.za

Report response as inappropriateThank you. We appreciate your input.
This response is the subjective opinion of the management representative and not of TripAdvisor LLC
KennettS4
4
Reviewed 12 January 2021
I wish we could go back there tomorrow!

This place is idyllic. I have traveled to many tropical island paradises, but this place is the best. It is not even on an island, but it gives one much more of that island vibe than you would get on a Thai island or on Mauritius. You get the feeling of being at a luxury tented camp in a game reserve at the beach somewhere in remote Mozambique or on a far-flung Indonesian archipelago.

The lodge borders on the Kosi Mouth section of the iSimangaliso Wetland Park UNESCO World Heritage Site. The Kosi Bay Estuary Gate is right next to the lodge, which makes the lodge the closest accommodation to the Kosi mouth and to Mozambique.

The drive down to the mouth on the sandy 4X4 track is an adventure that meanders down a hill with a vast view of the magnificent lake system, past some traditional Tonga fish traps (Utshwayelo), over a rickety wooden bridge and through an indigenous forest (and also past a military base that you know is there but cannot see!). The last part of the journey to the beach is on a quaint footpath through dense coastal forest that eventually opens up to paradise - the mouth of the the Kosi lakes system.

The beauty of the place cannot be described by someone like me who lacks the poetic ability of William Wordsworth or Atticus. However let me try, nonetheless: The beach is brilliant white, fringed by verdant green coastal dune forest, the river-mouth and estuary are translucent turquoise and the ocean is an inviting deep royal blue. It sounds like cliches, but you must see it to believe it.

The snorkeling in the estuary is as easy as it gets, but the fish-life is prolific because no fishing is allowed in the estuary (other than the traditional Tonga fish traps). The shore fishing in the ocean I have been told is some of the best in the country, but nothing wanted to touch my lures... I did see a big school of King fish between some bathers however. We also walked the 3.5 km on the beach to the Mozambican border, not seeing a soul on the way. We spotted some great bird life and the thousands of crabs constantly kept us entertained.

The lodge is very well run by Mike and Yolanda and their team. The staff are professional, friendly and helpful. The grounds and facilities are rustic, well-maintained and exactly what is required to enforce the remote island feeling. We stayed in a Tusker suite which gave me the feeling of a safari lodge tent in the Masai Mara. You have all the benefits of camping, but none of the downsides! The outdoor shower is the best I have ever had the privilege to use and the tent itself is pure luxury. There are small touches of details that make your stay even more pleasant - from the towels shaped like Elephant heads and rose petals placed on our bed when we arrived to the flask of boiling water getting delivered every morning at 05:45 (just in time for the opening of the reserve gate at 06:00 and my early morning fishing excursions).

The swimming pool is clean and situated under the shade of some indigenous trees next to the inviting bar area (which was unfortunately closed due to the idiotic alcohol ban). When our son was not on the beach or snorkeling with us or exploring the reserve with his cousins, he was in the swimming pool.

There is so much to do in the area - the turtle tour and the boat trip on the lakes are both musts on any person's to do list.

We are already planning our next trip - I have to catch one of the Mouth's famed Giant Trevallys!

Room tip: We have stayed in two different Tuskers and number 2 is the best.
Ask KennettS4 about Kosi Mouth, Lodge & Camp
Thank KennettS4

Thank you for your amazing review Kennett!
It was a pleasure having you and your family in Kosi.

Please share some of the fabulous photos you took.

Report response as inappropriateThank you. We appreciate your input.
This response is the subjective opinion of the management representative and not of TripAdvisor LLC
shelleyb910
42
Reviewed 11 January 2021 via mobile
Fantastic Stay at Utshwayelo

We loved our stay at Utshwayelo Lodge. We stayed in the Hippo Cabin which was lovely. The daily cleaning was a real treat. The shared kitchen was clean with quite a bit of fridge space per unit. Management were really helpful and accommodating even when I asked for a different mattress.
Utshwayelo provides access to activities such as boat trips, kayaking and hikes. We loved our hike with Vusi. Snorkeling at the river mouth was a highlight and we saw an array of fish and eels.

It was great welcoming back to Kosi!
Thank you for the lovely review, we look forward to seeing you soon.

If you have a few photos we could use for marketing we would be so grateful if you could share them with us.

Report response as inappropriateThank you. We appreciate your input.
This response is the subjective opinion of the management representative and not of TripAdvisor LLC
View more reviews
PreviousNext
123…34
<script type='text/javascript' c