The 2 most important things in choosing a hotel: free wifi and a location that is near the subway. Yes, the lobby is on the 2nd floor so if you have a lot of luggage, that might be a problem as the stairway is rather narrow too. The rooms are clean and modern-ish, but the beds are rock hard and the pillow is paper thin. Still, for the location, the price is hard to beat.

See all 137 reviews
Nearby Hotels 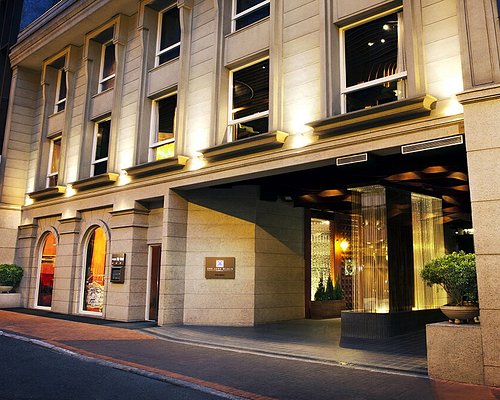 Alva Hotel by Royal
US$70

Expedia.com
View deal
Free cancellation
Pay up to 12X
Booking.com
US$164
FindHotel
US$131
Hotels.com
US$174
View all 13 deals from US$131
805 reviews
13.8 km from Minimal Hotel ‧ Avenue
We compared the lowest prices from 13 websites
Rosedale Hotel Kowloon
US$49

Expedia.com
View deal
Pay up to 12X
Booking.com
US$40
FindHotel
US$33
Priceline
US$42
View all 14 deals from US$33
85 reviews
0.4 km from Minimal Hotel ‧ Avenue
We compared the lowest prices from 14 websites
Hotel COZi Oasis
US$46

Following the end of a business trip, I moved out of the Sheraton Hotel and moved into the Sunny day hotel for an extended holiday in Hong Kong with my boyfriend. The location from the sheraton is about 15 minutes by foot.

The Sunny day hotel is located above the ground floor of some shops- this means you need to be prepared to carry your luggages one flight up to the reception area. The staff will not offer to assist you.

The reception area is decent but very basic. Our reservation was secured via booking.com. Check in was efficient and fuss free. There are two elevators which take you up to different floors.

Our room tip for avoiding to sleep through traffic sounds is to request for a room on a higher floor. We were assigned a room on the 8th floor which wasnt too bad but could be quieter.

Our room was very basic. If you're used to living in above average hotels- you may get a bit of a culture shock. Its basic but clean and it was fine for us. Hotels are very expensive in hong kong and space is scarce so we weren't expecting much and hence were pleasantly surprised.

We had all the basic amenities- hot water kettle, hair dryer, toiletries, towels, slippers, bathrobe, and two bottles of mineral watter. We were however disappointed with the customer service when we asked for additional bottles of mineral water - our request was denied as there was a specific quota of two bottles a day for each room. Having exhausted the quota, they expect you to boil tap water for consumption, which was ridiculous. Our towels were changed every day and when toilet paper ran low, a new roll was placed in the bathroom for us.

Our room rate did not include meals, but that was fine as we were happy to eat out. Food in hong kong is easy to find and is relatively reasonably priced. The hotel is well located near all the famous eateries and near shopping areas.

The bed was quite hard but we liked it. We were only supplied with one pillow each and it was quite flat but we used the cushion to prop up the pillow so that it was higher. We were not given a double bed- we had two single beds which we joined together. One bed had the air conditioning facing directly towards it which can be uncomfortable.

My favourite part of the hotel was the space we had in the bathroom. The sink was quite small but the toilet and the shower were separated. The shower space was decent and we were able to take nice long showers. Other hotels we looked at online had very cramped bathrooms. Our room could fit two large suitcases and additional travel canvas hand luggages comfortably. We also purchased shoes and had a myriad of shopping bags but in spite of this, we still had walking space.

The traffic sounds can be quite annoying but this was a walking holiday for us and most of the time we only used the room for storage, showering and sleeping so it didn't bother us much. Families with young children may find this place discomforting. Because the room is not carpeted, the sounds do travel.. We could hear noises from the corridors, doors being opened and closed, etc.

The lift does rattle a bit but there's a sign certifying its safe status and we encountered no safety issues during our stay.

Overall, it wasn't fantastic but it checked all the boxes for us. If you're single or a young couple and on a budget (and you're not too fussed or don't foresee yourselves spending a lot of time indoors), this is a hotel that has great value for money. We wouldn't recommend it for married people with children though!

This review is the subjective opinion of a Tripadvisor member and not of TripAdvisor LLC.
dwolfliverpool
Bad Homburg, Germany
2432
Reviewed 1 August 2012
Great location, CLEAN, cheap

We paid about £65 for the night through booking.com. The room was a double without a windown. It wad very clean, air con was great and it was a great base. The location on Nathan road in Kowloon was fantastic. Ten minute water from the harbour front and the laser show (each night at 8pm), best of all, across the road from Kowloon park which has a great outdoor swimming pool complex (5 min walk). Swimming costs 19hkd - 5hkd for returnable locker deposit. Three swooning sessions a day- can't remember exact times- google Kowloon park swimming times. Enjoy. P.S. The train to Kowloon is excellent 140hkd fir two people with lots of free shuttle buses there and back from the station. Beware when catching the shuttle bus back from the drop of on Austin road (next to Jordan station) because it goes all the way to the other end of Kowloon before returning to the station- allow time- we nearly missed the plane though staying at the pool too long.

This review is the subjective opinion of a Tripadvisor member and not of TripAdvisor LLC.
Jhsan
Jakarta
136107
Reviewed 1 April 2012
Unrecommended

Imagine you arrived late at nite,2 elderliys,a child,a baby,3 women,1 man,full luggage,the staff didn't give a hand w/ the luggage,reasoning there were only two of them, and still didn't help after 3rd person arrived,while you've to carry evErything one floor up to reach the lifts,handed roomkeys 6091&93,but on the 6th floor,the rooms weren't there. Then you complained, but the staff were more furious,started shouting&insisted that you were already told that the rooms were on the 9th floor!!!!!??
What the hell??? We made the booking via web,it says no deposit charged but the staff insisted to charge anyway!!! And they even tried to charge to clean toilet wall that accidentally smeared w/ JUST soap,which,logically&in fact,after we cleaned it,was totally clean. Being a hospitality person myself,this hotel is a hellhole on earth,not worth existing at all

This review is the subjective opinion of a Tripadvisor member and not of TripAdvisor LLC.
JuzeJames
Singapore, Singapore
43
Reviewed 31 March 2012
Staff not as helpful as mentioned in reviews...

I've booked this hotel specifing that I would like to arrange for early check in if possible 2 months before I came. Staff are extremely inflexible in taking my request when I arrive saying that they do not allow early check in unless we pay additional 500HKD to check in early.

Bad experience especially when you're suffering from jetlag.

This review is the subjective opinion of a Tripadvisor member and not of TripAdvisor LLC.
purplemuse
Paris, France
145186
Reviewed 27 November 2011
Prime location for a fair price

I wanted to stay in TST area in Hong Kong, but most of the hotels that I've found were a bit expensive. Thanks to some hotel booking sites and reviews, I eventually came across this hotel.

The location is perfect as it's between TST and Jordan MTR which makes it really convenient to move around. The hotel is quite easy to locate as it's in Nathan road, one of the bigger streets in TST.

I would definitely stay in this hotel when I go back to HK to shop.

Room tip: Try to get a room past the 8th floor so you don't hear the busy streets.
Ask purplemuse about Minimal Hotel ‧ Avenue
3  Thank purplemuse

This review is the subjective opinion of a Tripadvisor member and not of TripAdvisor LLC.
View more reviews
PreviousNext
1…91011…