US$308
US$272
View deal
Free cancellation until 27/06/21
Orbitz.com
Booking.comUS$308
eDreamsUS$308
View all 17 deals
Prices are the average nightly price provided by our partners and may not include all taxes and fees. Taxes and fees that are shown are estimates only. Please see our partners for more details.
Serina2s
2

Please do yourselves a favor and choose another hotel.
Everything is outdated, pools are not maintained and cigarette buds on the poolside, terrible customer service, and inroom dining is a joke.
For inroom dining, you will get your food in plastic containers and there isn't even a proper table and chair in your room. It's just highly over priced delivery food.

Trip type: Travelled as a couple
See all 710 reviews
Nearby Hotels 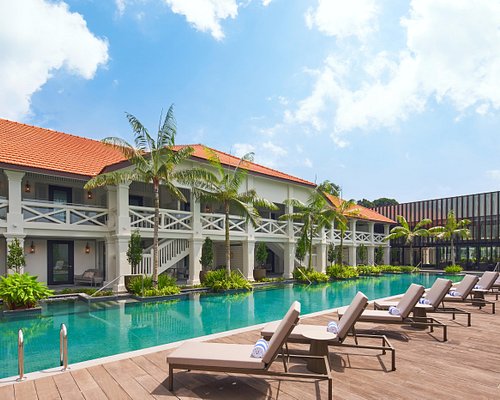 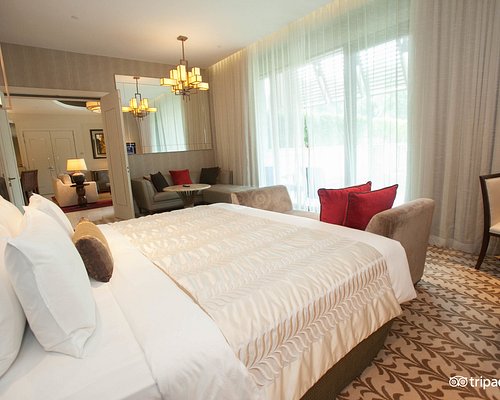 Taking safety measures
We compared the lowest prices from 15 websites
ONE°15 Marina
US$229
US$175
Tripadvisor
View deal
Reserve now, pay at stay
Travelocity
Expedia.com
US$229
Orbitz.com
View all 18 deals from US$174
424 reviews
2.1 km from Amara Sanctuary Resort Sentosa

Expedia.com
View deal
Hotels.com
ZenHotels.com
US$300
getaroom.com
US$389
View all 16 deals from US$300
3,582 reviews
0.9 km from Amara Sanctuary Resort Sentosa

Travelocity
View deal
Hotels.com
FindHotel
US$231
Destinia.com
US$259
View all 16 deals from US$231
1,111 reviews
0.4 km from Amara Sanctuary Resort Sentosa

My husband had booked the courtyard suite with private bath for my birthday yesterday. For people who normally don’t spend so much on a room, we had certain expectations for a room worth $600+ /night.
The bathroom was dirty and wood was coming off, there was a water dripping noise coming all night. Very poorly maintained. The lighting in the room was only very bright halogen bulbs and no switch to control lighting only one master switch.
Everything about the room especially the bathroom just looked old and not maintained at all the toilet seat was stained, all the wood seemed it’ll just come in your hand, everything seemed liked it been the same as it was during the British army’s time and no upgrading has been done.

Other minor things:
The hotel is not contacteable through phone prior reaching there. We requested an early check in, but still when we went they said they will try to get it ready by 3 pm and for our request for late check out also just extended by half hour. My husband had requested for special arrangements as a surprise for my birthday and they didn’t do anything apart from a small cake which they just dropped off randomly in the evening to finish their job.

This review is the subjective opinion of a TripAdvisor member and not of TripAdvisor LLC
karenthios
Singapore, Singapore
72
Reviewed 2 weeks ago via mobile
Great stay with our golden retriever!

Not too sure what the earlier bad reviews were about，but we (too) came back with a positive experience. And yes, they are pet friendly!

We emailed and liaised directly with the hotel manager, Poom who was very responsive and accommodated our special requests.

We were celebrating 15 years with our golden retriever, and we were surprised with champagne and cake! Thank you!

Villa 2 was great, and we were served proper room service with proper plates and cutlery. Nothing to complain about really... simply a lovely stay!

Thank you so much for your time writing this review and very happy to hear that Amara Sanctuary Resort Sentosa made your stay with your 15 years old Golden Retriever to become a memorable stay. We look forward to welcome you back in the near future. Stay Safe

Report response as inappropriateThank you. We appreciate your input.
This response is the subjective opinion of the management representative and not of TripAdvisor LLC
explodedskittles
1
Reviewed 3 weeks ago
Awesome Staycation!

Some people might have preferred to cancel their booking during Phase 2 (HA), but I'm glad that I went ahead with it. Hotel was quiet and peaceful, staff were polite and helpful and the room was clean and spacious. We even had the whole pool to ourselves. Also, I was pleasantly surprised to see people checking in with their pets. Turns out that they are a pet-friendly hotel!

Thank you very much for your review and kind understanding toward the current situation. We do our best by deliver our best service to all of our guests every day. We hope to see you checking in with your pet for your next stay :-)

Report response as inappropriateThank you. We appreciate your input.
This response is the subjective opinion of the management representative and not of TripAdvisor LLC
xuduo5230
1
Reviewed 3 weeks ago
Amara sentosa wedding:bad experience

Just share the bad experience we had with Amara for wedding:

1. Hotel reduced the complimentary 2 night stay to 1 night, citing reduced guest capacity due to Covid rules and we had to top up to get a 2nd night stay in the suite.. But Amara forgot to reserve the suite and told us only 1 night available due to December staycation season with less than a month to go, despite our contract being signed 1.5 years ago. After our protests, Amara finally offered another suite for the second night, meaning the couple had to change rooms in the middle of the wedding.

2. Amara changed PIC 4 times in total. The handover was poor and we had to repeatedly go through the entire process with each change of PIC. Hotel blamed hiccups on the previous PICs.

3. Our wedding gift was lost in Amara. We came to know about the wedding gift -vintage wines - only 4 months after the wedding. But CCTV is reserved for 30 days only. Amara insists the wines were directly delivered to the ballroom on arrival and consumed by guests.
a. The wine was delivered 2 days before the wedding.
b. The gifts were delivered to the hotel with the couple's name printed. Hotel had likely served the wine to the wrong wedding, but still insisted they delivered it to the correct wedding.
c. Wedding couple had a PIC for corkage and there was no evidence of wine delivered, nor was corkage charged.

Despite the obvious flaw in their argument, the hotel management was adamant that there was no wrongdoing on their part and offered no compensation at all. They used the convenient excuse again that the PIC for the wedding had left their service. The Head of Security openly invited us to make a police report, confidently telling us that he is very experienced in handling such cases, obviously emboldened by the fact that CCTV evidence is lacking.

The manner at which Amara Sanctuary handled the wedding throughout lacks empathy and at times, appeared arrogant. A wedding is meant to symbolise the start of a beautiful journey between two people, and the hotel appears to be doing its level best to fill the journey with obstacles.

It definitely marked the end of any association we will ever have with Amara Sanctuary Resort Sentosa. We are sharing our experiences with all for their consideration.

This review is the subjective opinion of a TripAdvisor member and not of TripAdvisor LLC
bentans
Singapore, Singapore
2
Reviewed 3 weeks ago via mobile
Staycation

Went over a public holiday and Villa 1 was across an unsightly leftover food collection/disposal area. Our Villa was visited by unwelcome guests such as ants, lizards and cockroaches which crawled into our bedroom and belongings. When we brought it up to the front desk manager, his first reaction was to point us to a disclaimer that this hotel was near nature and that’s why it is called A Sanctuary rather than offer any suggestions or solutions to deal with the cockroach problem. Two strikes out immediately; not only do they have a pest problem but also non-existent customer service. Third strike out was no response or follow up after we wrote in to highlight our traumatic experience at the hotel. The hotel and staff do not deserve any stars for their lack of hygiene and complete lack of care or concern for their guests. Stay at your own risk.

Thank you for your time writing your review through here. The hotel has routine on cleaning food collection area twice daily as well as having the scheduled on weekly basis for pest control in all areas.