US$50
US$48
View deal
Booking.comUS$50
Hotels.comUS$48
TravelocityUS$48
eDreamsUS$50
FindHotelUS$48
Orbitz.comUS$48
View all 12 deals
Prices are the average nightly price provided by our partners and may not include all taxes and fees. Taxes and fees that are shown are estimates only. Please see our partners for more details.
kajetans2019
Manchester, United Kingdom
5239

well located, friendly staff, very good food, clean, many activities including mini club for children, worth the price, the only minus on location is beach, its not a sans but very small stones (size of sunflower seeds) so its not comfortable to walk over and you have to cross road to access the beach from hotel
visited May 2008More

Report response as inappropriateThank you. We appreciate your input.
This response is the subjective opinion of the management representative and not of TripAdvisor LLC
See all 336 reviews
Nearby Hotels 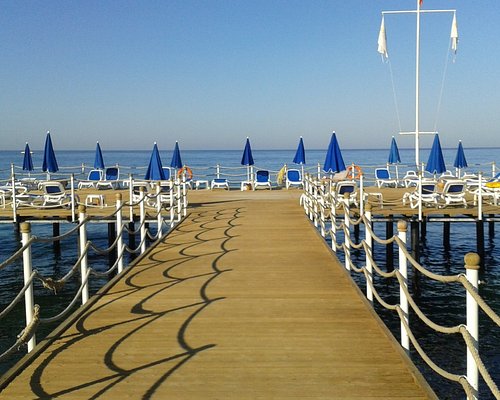 dated
boring
staff hostile
food bland
main meal is like slush
wine is vile
lemonade like dish water
gin and tonic like toilet cleaner
average age 85 (ish)
no British here except me and my husband
its dull
indoor pool is cold and no where to change
coffee is rank
reception staff looks like Mr Beans wee brother ( minus personality)
avoid at all cost. a tent at the north pole would be more inviting

This review is the subjective opinion of a Tripadvisor member and not of TripAdvisor LLC.
Ján D
Bratislava, Slovakia
71
Reviewed 21 September 2018
2 days in other room

Hoterl is clean, nice, safe and food is excellent. But they gived us our rooms after twoo days (we was twoo couples together in one apartman). That big minus. Nice tobogans and hotel pool. When you want to beach, you must use tunel under the road, after rain its not so comfortable.

Room tip: not at first floor with outside window (kitchen suply), better third or higher. not so much lifts, but we used stairs
Ask Ján D about Kahya Hotel
Thank Ján D

This review is the subjective opinion of a Tripadvisor member and not of TripAdvisor LLC.
poshpampink
London, United Kingdom
29
Reviewed 30 October 2017 via mobile
Worst hotel in all my travels

The only good thing in this hotel for me is the food, close to beach, close to shops and the cleaners who clean the room daily. The staff seems they are not happy to be at work . The only staff that can have a conversation with you is the security guy called Ismail. The rest seems they are afraid to speak English and always feels like they are avoiding talking to you. We arrived at the hotel at about 2am, we were family of seven. Checked into my room 2102. The rooms need a desperate renovation, mouldy in my bathroom. Doors were all worn out. When we arrived we were given a list of all inclusive meal time. There was basically nothing to do at this hotel, no entertainment at all , the only entertainment we had through out our six days stay was one night of 30minutes Turkish dances , no animation team . While the other nearby hotels were playing beach volleyballs organised by their animation team. We booked outing and planned it to be back in times for the so called cake service , which in the list is 3.30- 4.30. We came back to the hotel at about 4.05. The restaurant staff says it’s finished at 4Pm, I tried to explain to them the information given to us says 4.30. They were not interested in talking to us. The next day I raised the issue with the receptionist who said that the cake service finishes at 4pm, I asked him to get the list that was given to us which he brought out and in front of me changed the time in the paper to 4pm and says summer time is 4.30, I did ask him why were they are handing wrong information when we checked in, he just dismissed me with no apologies what so ever. He just referred me to go and talk to the restaurants manager, who said to me they put out information all over the restaurants and the only information I saw was change of dinner time that finishes at 8pm. Although he acknowledged that the staff should have given us something around 4.05, still with no apologies for wrong information given to us when we checked in. My friend and her family were suppose to go to this hotel, I called her to make sure they change the hotel and I am glad they changed . The WiFi is basically none existence. I know it is October , I travel every October during half term and there were entertainment in all the hotels I have visited ,the weather was great while we were there but the pool was so cold. People rather swim in the beach than the pool because of it being cold. Will never recommend this hotel.
Top Tip:
Avoid it like a plague.. it’s not for Brits. I am very disappointed with travel republic for selling this hotel to Brits.

This review is the subjective opinion of a Tripadvisor member and not of TripAdvisor LLC.
Tania x
Lithuania, Vilnius
728
Reviewed 18 October 2017
Great hotel !

It was our second time in this great hotel near Cleopatra Beach, close to the city center. This time we were accommodated in the B Corpus. The room was missing a full-length mirror, Wifi was not working. However, it was quite spacious, clean and had a castle view. A good variety of delicious, well-prepared food. The hotel stuff was friendly and careful. Special thanks for the captain Çetin and waiter Nazmi. We wish you good luck!

This review is the subjective opinion of a Tripadvisor member and not of TripAdvisor LLC.
Tracycmc
Edinburgh, United Kingdom
724
Reviewed 15 September 2017 via mobile
Not for british

Just back from a week staying in this hotel and it was more like being in Russia! Rooms are good though food is horrible. Staff are hard working but not that friendly. The hotel was busy with Russians and Germans (what a miserable bunch they are!) everything is designed to cater for them so best avoided if you are from the uk.