US$183
US$102
View deal
Free cancellation until 29/01/22
Hotels.comUS$130
PricelineUS$144
Agoda.comUS$183
View all 14 deals
Prices are the average nightly price provided by our partners and may not include all taxes and fees. Taxes and fees that are shown are estimates only. Please see our partners for more details.
MadsDK
Odense, Denmark
567135

Good hotel in need of upgrade

This hotel is very difficult to rate. On one hand the rooms are very big and very comfortable. On the other hand, everything requires some upgrade to modern standard. The hotel is clean and the staff is very helpful.

To reach the hotel you either call for a pick up at the Hakone station or grab the cable car to the Koen-Kami stop and walk a few hundred meters to the hotel.

The breakfast is ordered the day before and is ready at the table the next morning at the agreed time. Breakfast is good, coffee could be better.

We also tried the 5-course set menu. A rather expensive choice of dinner but it was good. In our opinion they could have slowed down a little and left a little break between the dishes. The menu is inspired by the French kitchen which we also found a bit strange when in Japan. We would have preferred a Japanese inspired kitchen. The restaurant is, however, a good convenient alternative after a long days walk in the national park.

The onsen (thermal bath) and sauna area is functional but in dire need of renovation. The best part is the outdoor area.

The size of the rooms the comfortable hotel and the friendly personnel would give this hotel 5 stars. The extreme lack of maintenance leaves me only with 3 stars in this review.More 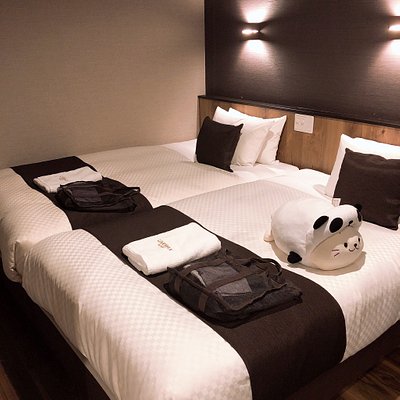 Hotels.com
View deal
Travelocity
FindHotel
US$55
eDreams
US$68
View all 15 deals from US$55
202 reviews
0.5 km from Hotel Marroad Hakone
We compared the lowest prices from 15 websites 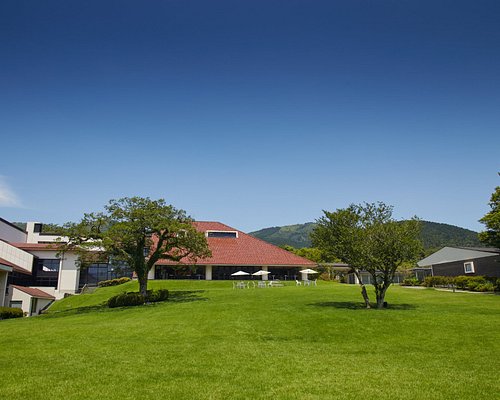 Expedia.com
View deal
Hotels.com
Agoda.com
US$76
eDreams
US$91
View all 14 deals from US$76
413 reviews
2.8 km from Hotel Marroad Hakone
We compared the lowest prices from 14 websites
Sponsored
Shiki Resort Forest Hakone
US$86

Hotels.com
View deal
Travelocity
Agoda.com
US$280
Expedia.com
US$318
View all 16 deals from US$280
295 reviews
1.8 km from Hotel Marroad Hakone
We compared the lowest prices from 16 websites
Breakfast included
Ryokan A Ryokan is a traditional Japanese accommodation which typically features ‘futon’ (folding mattresses) on ‘tatami’ (straw mat) floors. Many Ryokan are known for their public baths (typically "Onsen" hot springs) and their traditional cuisine. 24/7 front desk service is not guaranteed for this accommodation type.
Yamanochaya
US$325

We spent two nights there. Our room had a nice view of the mountains. The Onsan was very nice with an outside area in the fresh air. We enjoyed the bath in the evening and again in the morning and never even used the tub or shower in our room. The only problem we had was that the meals were out of our price range, so we went elsewhere to eat

Room tip: Every room looks like they have a good view. There is an elevator so accessibility is no problem.
Ask Yuko-Stu about Hotel Marroad Hakone
Thank Yuko-Stu

This review is the subjective opinion of a Tripadvisor member and not of TripAdvisor LLC.
V1110UBpaulm
Cabarita, Australia
378
Reviewed 28 April 2018
Beautiful area but hotel is past its best.

My wife and I stayed in late March.

Hakone is a beautiful area.
Transport around the region is fun. I really enjoyed the ropeway.
Bus driver at the hotel was great. Could not be more helpful.
Our room was a great size.
Great restaurants nearby.

Biggest mosquito's I have ever seen in the room.
Not a lot of English spoken at the hotel. Totally understand this isn't an issue for locals but its worth knowing if you are not Japanese.
Hotel is pretty old.
Bathroom was old and water pressure was variable.
Breakfast served was odd and unlike anything else we had in Japan.

Ultimately I wouldn't return, but it could have been worse.

This review is the subjective opinion of a Tripadvisor member and not of TripAdvisor LLC.
CoolIndiantraveller
New Delhi
95162
Reviewed 17 April 2018
Excellent hospitality

As many have mentioned that the hotel is a bit dated, well, unless you enter the rooms, you don’t get the feeling. And once you do feel, its an old hotel, you kind of love it. It has that old world charm. Very large rooms by Japanese standards, well furnished and beautiful location. What else do you want? Even the robes they have in rooms, are provided in 3 sizes and those are printed ones, not the standard white ones which you find in other Japanese hotels.
Around 30 mins of drive by taxi from the Hakone ropeway gate, its located in the hilly region, and it was raining the day we checked in. Reception is on the 2nd floor, and 1st floor is the one for onsen, and spa and tennis court.
Hakone is city of onsen, Japanese style of public bathing, in naked. So obviously the resort has one. It also has a spa and provision for free massage through their motorised chairs. Tried the foot massage chair (desperately needed as you have to walk so much in Japan), and full body massage chair. Both were very comforting.
Hotel doesn’t have coin laundry. Apart from that, everything was there.
There is no buffet system for food, so you got to book your breakfast and dinner in advance. Since we were vegetarians, they made efforts to make a lavish dinner for us which consisted of marinated veggies, boiled ( actually grilled)veggies, and dessert ( 5 course meal) but I was just not able to eat another plate of raw vegetables next day in breakfast. I think , they should update the chef that vegetarians are not vegans. A bowl of cereals, milk and bread would have been just enough for the 2 of us . But still I highly appreciate the effort they put in feeding us. And boy, someone has to learn from Japanese how to present food.
There is free shuttle to Gora station from where we took the mountain train to Odawara, hardly a 5 min drive, but very handy in rain, and also because it’s a hilly region. The first shuttle leaves at 9 am.
If there is anything that I would like them to change, then it will be their exhaust system in the bathrooms. It was very weak, and it made the bathroom very stuffy, and I could see mould in some parts of the ceiling.
In all, I loved the hotel. Kind of regret it that we just had few hours to spend in the hotel.

This review is the subjective opinion of a Tripadvisor member and not of TripAdvisor LLC.
morenaGeorgia
Georgia
1212
Reviewed 18 March 2018
Hotel past splendor

Hotel trying to live up to its past glory, but falling way behind competition. Price are up there, location is good, but its look rundown. However it is clean. The hot spring is functional but look tired. Being a foreigner, I was very disappointed by the food. There were no Japanese food, only international or french at good price ( $70.00 average for a set meal per person). Complimentary continental breakfast was OK, again with no Japanese flair. You have to set your choice the night before (only 3 choices). After 3 days you want something else than croque monsieur. Rooms were confortable with no luxury. Service was cold (dining room) Friendly at reception

This review is the subjective opinion of a Tripadvisor member and not of TripAdvisor LLC.
JNChia
North Sydney, Australia
5349
Reviewed 17 November 2017
hotel with japanese style room in Hakone Gora

surprisingly large bedroom and an adjoining Japanese style sitting room with mats and featured wall. bedroom have a double bed and plenty of space. have good view of surrounding. autumn colours of foliage. lovely garden area. hotel staff are very friendly and shuttle service offered.
The meals are certainly unexpected. Dinner is full serviced, French cuisine, set menu and changes daily. one have to book meal times on each day of our stay.