Prices are the average nightly price provided by our partners and may not include all taxes and fees. Taxes and fees that are shown are estimates only. Please see our partners for more details.
XueyanD
Wuhan, China
390180

The good: this hotel is strategically located on the north-western side of the city wall (across the road), which means it's close to the main roads out of the city, to the city's city-wall park (which goes around the old town, 13.4Km) and close to the city centre. There is a helpful concierge (especially when you have to take a taxi somewhere!). Two ATM machines next to the building (both sides);

The so-so: some rooms are better than others, so if you're not happy, let them change your floor. The restaurants is also so-so and a lazy staff. Breakfast usually overcrowded, try to be there on time. The lobby bar is pretty lame, but better than other places I've been.

the bad: there is a small swimming pool in the basement; there is a noisy KTV on the 5th floor and a pretty bad massage-SPA on the 6th.

tip: a good place nearby to eat: from the reception cross the street and walk southwards (right side) in the park, after 300m in the middle of the park a nice modern chinese restaurant with imported wine.More 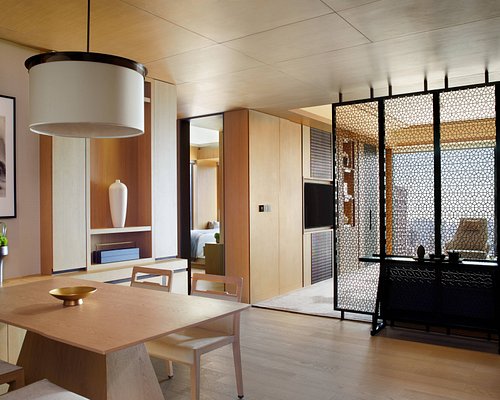 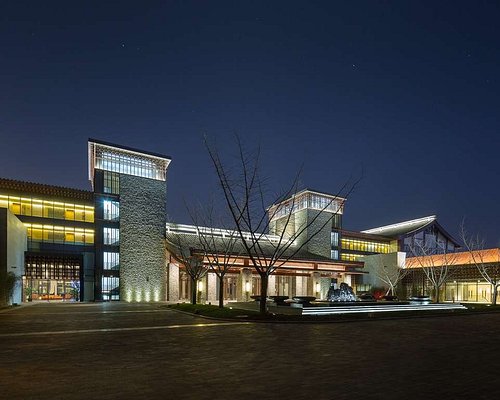 Expedia.com
View deal
Free cancellation
Reserve now, pay at stay
Hotels.com
US$129
Trip.com
US$99
Priceline
US$129
View all 14 deals from US$99
5,909 reviews
25.8 km from King Dynasty Hotel
We compared the lowest prices from 14 websites

Breakfast included
The Ritz-Carlton, Xi`an
US$204

RitzCarlton.com
View deal
Free cancellation
Reserve now, pay at stay
Expedia.com
US$204
Hotels.com
US$204
Booking.com
US$204
View all 12 deals from US$202
2,159 reviews
5.7 km from King Dynasty Hotel
We compared the lowest prices from 12 websites
W XIAN
US$196

Taking safety measures
We compared the lowest prices from 16 websites
The Westin Xi'an
US$127
Booking.com
View deal
Free cancellation
Reserve now, pay at stay
Expedia.com
US$127
Hotels.com
US$127
Priceline
US$127
View all 14 deals from US$127
5,009 reviews
7.2 km from King Dynasty Hotel

Expedia.com
View deal
Free cancellation
Booking.com
US$130
Hotels.com
US$130
Priceline
US$130
View all 15 deals from US$130
592 reviews
9.7 km from King Dynasty Hotel
We compared the lowest prices from 15 websites
Hyatt Regency Xi'an
US$146

Expedia.com
View deal
Free cancellation
Reserve now, pay at stay
Booking.com
US$146
Hotels.com
US$146
Priceline
US$146
View all 13 deals from US$145
328 reviews
9.5 km from King Dynasty Hotel
We compared the lowest prices from 13 websites
Le Meridien Xi'an Chanba
US$97

The hotel was nice enough staff were friendly but the air con did not work,There is a made dash for breakfast, No where near enough tables for the number of guests. By the time we got to our seat our breakfast was cold, drink prices were a bit high,

This review is the subjective opinion of a Tripadvisor member and not of TripAdvisor LLC.
TillyHavelockNorth
Paihia, New Zealand
5686
Reviewed 4 November 2012
Wendy Wu Tour

Two thirds of the way through our tour so this was surprising to find the bed was not so hard.
good complimentaries, catered for Western & Eastern breakfasts, quiet, central shopping, supermarket 10 mins away, had trouble with the internet,lighting not the best. Had a nice view out to the pool and garden.

This review is the subjective opinion of a Tripadvisor member and not of TripAdvisor LLC.
PandTK
Hartlepool
1753
Reviewed 2 November 2012
No Problem.

Good rooms, though once again slightly tired at the edges because of the amount of use they get. Despite that, the hotels Travelsphere use seem to be the same ones that other tours use, as we saw customers from Wendy Wu etc. Food was of a very good standard for evening meal but remember If you aren’t prepared to eat Chinese food or will moan about it after a couple of servings, try Benidorm! It was at this point a couple of people began looking for alternatives. Breakfast was reasonable with plenty of choice.
The hotel is located on a roundabout and we didn’t venture out alone so can’t really comment on local facilities. We did the optional night tour of Xian which was well worth it, especially looking at local food items for sale, including frogs (live), fish (live and jumping out of tubs) and unidentified items! At the end of this tour we found a Spar that sold bottles of beer for 25p! A bargain and just the thing to quench thirst after a busy day.
Terracotta Warriors are amazing. Xian was really interesting. A great visit.

This review is the subjective opinion of a Tripadvisor member and not of TripAdvisor LLC.
p999hug
Merseyside, United Kingdom
6575
Reviewed 27 October 2012
Excellent View

We stayed as part of a Travelsphere tour and had a brilliant view of the city walls - lovely of an evening. The room was clean and spacious but dark with adequate furnishings, not as tired as most places we stayed in China. The bathroom and facilities were satisfactory. For the size of the hotel the breakfast room was very small and finding a seat was difficult, quite chaotic really. Breakfast itself was not very good either. Overall an ok hotel for a stop over.

This review is the subjective opinion of a Tripadvisor member and not of TripAdvisor LLC.
DonnaQ28
Frodsham, United Kingdom
4230
Reviewed 21 October 2012
Huge Rooms!

Really nice hotel all round!
Reception area was really nice & spacious, the bar was relaxing, restaurant (breakfast) plentiful and really nice :)
The road outside was really busy but to be honest it didn't disturb my sleep as the blackout curtains & double glazing seemed it keep it all out.
Make sure (if possible) that you get a room with views of the city walls, really lovely big windows make this view spectacular and also watching the Tai Chi in the park in the mornings was lovely.

Room tip: Ask for a room with views of the city walls.
Ask DonnaQ28 about King Dynasty Hotel
1  Thank DonnaQ28

This review is the subjective opinion of a Tripadvisor member and not of TripAdvisor LLC.
View more reviews
PreviousNext
1…121314…
<script type='text/javascript' crossorigin='anonymous' async onerror='__script