Hostel Casa Colon
Hostel Casa Colon
Lowest prices for your stay
Lock in the lowest price from these sites
US$36
Reserve now, pay at stay
View deal
PricelineUS$36
Agoda.comUS$36
eDreamsUS$36
StayForLong
Expedia.com
Travelocity
View all 12 deals
Prices are the average nightly price provided by our partners and may not include all taxes and fees. Taxes and fees that are shown are estimates only. Please see our partners for more details.
Myo M
Coquitlam, Canada
865865

And also, as for the "convenience of sightseeing", just at about a 10-minute walk to the left after coming out of this place is the "pedestrian street" Av. Central (its west end from which it goes on quite a few blocks to the east lined with all miscellaneous shops on both sides) then about a further 5-minute walk to Mercado Central (for a "pretty good" souvenir shopping where there are also a number of mini-restaurants) followed by a short walk further to Teatro Nacional (with a nice "guided tour" of its beautiful interior) where in the vicinity of the Theater are also two other great sites namely the city's "main cathedral" Catedral Metropolitana & the national history museum Museo Nacional de Costa Rica.More 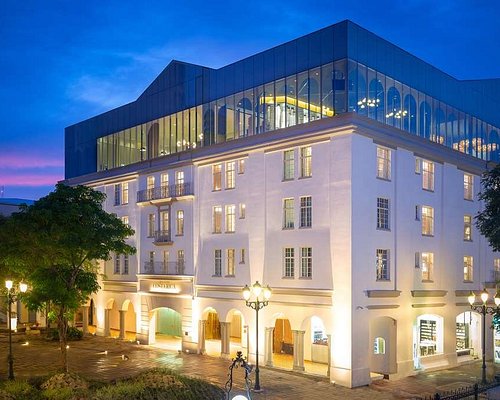 Gran Hotel Costa Rica, Curio Collection by Hilton
US$218
US$169

Taking safety measures
We compared the lowest prices from 22 websites 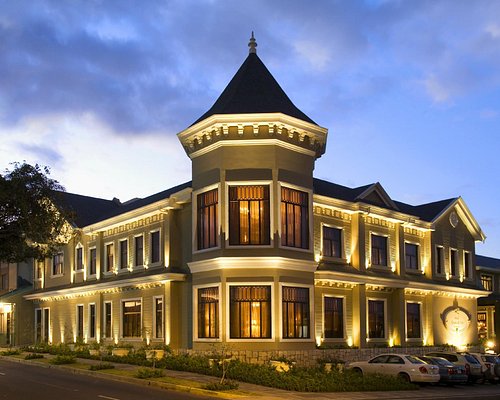 Expedia.com
View deal
Pay up to 12X
Booking.com
US$124
Destinia.com
US$99
Hotels.com
US$134
View all 17 deals from US$99
2,919 reviews
7.9 km from Hostel Casa Colon
We compared the lowest prices from 17 websites
Breakfast included
Santo Tomas Hotel & Wellness Center
US$64

Worst Hotel in the world !! I have stayed at more than 1000 hotels around the world and this one is by far the worst ! Even if you would pay me 1000 usd to stay 1 night I would refuse ! Trust me stay far away from this place !

On arrival, the front desk lady was not welcoming. She asked me to pay for my reservation which I have already fully paid ! I told her and after a while It was ok. That was the first lie.
She gave me a “quiet room” like I asked.
I had to go deep in the hotel which look like a service area. It was room 209. The room was super tiny no window, only had a hole in the wall of the bathroom to the streets. It was an awful room, you can not find that kind of room in any of their reservation websites. It looks to be a staff room or whatever.
I had to go ask the front desk to get the room I paid for, that the room was way too tiny and not the superior room I paid for. She told me she sent me an email telling me that I would get a small and quiet room. This was the second lie! I received an email about a quiet room not about a tiny room with no window! So, she gave me a room straight at the corner of the street! Which was still not what I paid for, but I took it. It was room 201, if you get this room refuse straight away trust me!

For you to understand this hotel, it is on the busiest intersection of San Jose! Probably of Costa Rica. There are terminal bus stops and bus stops all around the hotels. You have an insane traffic 24/7. It never stops! The hotel is really old and you can see all around doors/windows outside ! It is basically trying to sleep on the road between trucks, buses and cars.

It was impossible to sleep or even watch tv, nothing. I went back to see the front desk lady asking for earplug or anything. No earplug available, no solution.
Every 30sec I would jump out of my bed whenever a truck would horn etc It was so intense that for the first time of my life I got a panic attack!!
Again, I went down to front desk. Told the lady everything. She seemed to absolutely did not care! I asked to get back the crappy room, expecting to have less noise.

Then around 30/40 people from outside came into the hotel with huge speakers and sound system. They started to have a party! They played karaoke, danced etc. The hotel was vibrating, our beds included. it was a nightmare. My friends were staying in room 202 just on top of the party. Around midnight we went to see the staff and tell then it was not correct for us we could not sleep. They did not care and were not able to speak English. Only thing they could say was “it was a private event”.

I had to put two towels around my head to fall asleep after being so exhausted, it was around 2:30am. My friends were able to barely sleep after 3:30am when the party stopped. Then they woke up at 5:30 am when the traffic was getting denser.

When we woke up, we found out that people from the party dirt our rental car, we even saw them just sitting on it during the party. We had to go pay to get our car clean before giving back to our rental agency!

We tried to look for hotel staff to talk about the issues, no one could speak English!!
Finally, later this morning the front desk lady came in. She was upset about the review that my friends left! Seriously?! She told me that she was the owner !! new surprise! I told her about the night and she said she did not know about the party! again another lie because she was there was the party started ! I asked her to refund me because I will not spend another night here. She refunded me only for my last night at a cheaper rate that I paid for because of fees from the booking site! What a lie she could just refund me the total straight from the reservation site. I did not want to argue, I just grabbed whatever she gave me and I left for a much much better hotel just close by.

All in all trust me when I say I would not stay here a night even if I was paid 1000 usd ! Worst hotel experience of my life ! This hotel should not even exist! This could ruin your trip and experience of this beautiful country!

Thank you for your review, but we are not agree, with some things that you describe( are not true) When you made the check in, the staff told you in advance the different rooms that we had and you were agree with the small room,

You dont liked it, so we gave you another one room and also you had complains...

You was upset with the rooms, with the people, with the noisy, the cars, the street,with everything!

Also we really apologize for the restaurant noisy after midnight it was a mistake!

When you made the Check out you looked normal, happy and you have been agree with the refund. Maybe the next time, you can talk at the moment and the Hotel can help you with different ways

Report response as inappropriateThank you. We appreciate your input.
This response is the subjective opinion of the management representative and not of TripAdvisor LLC
alexD3005LV
1
Reviewed 23 October 2019
Excellent place to stay in the heart of the city

This review is the subjective opinion of a Tripadvisor member and not of TripAdvisor LLC.
NORTHERNGIRL588
Thunder Bay, Canada
65
Reviewed 12 February 2019
Not impressed

Very interesting and unique historical building with beautiful architectural designs throughout but our room was anything but comfortable. The sheets did not appear to have been washed. Filled with grit and hair. Ended up sleeping on top of covers. Bed was so uneven that I almost rolled off of bed. Rest of room was reasonably clean. Very, very noisy. The free breakfast not worth staying for. It was the only bad meal we had in our week long stay in the country. The staff was very friendly

Report response as inappropriateThank you. We appreciate your input.
This response is the subjective opinion of the management representative and not of TripAdvisor LLC
FLORIDAGOLDENGIRL
MIAMI
132
Reviewed 5 November 2018
Wonderful Old Mansion from Colonial Days

This grand house has been restored into the hotel and hostel it now is, with restaurants and nice bar, lovely grand room to sit and meet, to use your computer, prices are decent for Costa Rica and the location is the best there is.

Thank you very much for telling us about your experience, very happy that you had a good time

Report response as inappropriateThank you. We appreciate your input.
This response is the subjective opinion of the management representative and not of TripAdvisor LLC
charlotte904
Cherhill, United Kingdom
175
Reviewed 28 August 2018 via mobile
Basic but friendly

We came here on our way out on a tour. We had a family room which was very basic but had bathroom and a/c. The food was OK and the main sitting areas comfortable and elegant. Ok for a short night but I wouldn’t want to be there for long.

We really apreciatte your opinion, Greetings!