Eagle Rock Lodge
Lowest prices for your stay
Lock in the lowest price from these sites
US$99
Reserve now, pay at stay
View deal
PricelineUS$99
Agoda.comUS$99
TripadvisorUS$99
Prices are the average nightly price provided by our partners and may not include all taxes and fees. Taxes and fees that are shown are estimates only. Please see our partners for more details.
Windylee75
1

Absolutely delightful!! I've stayed in 5 star hotels that weren't this clean or comfortable. The owner is an absolute doll and super accommodating. We stayed in the large top floor suite and it just doesn't get any better. Centrally located within easy driving of several must see places. I'm not able to sleep without some type of fan or white background noise and was absolutely thrilled to see a natural white noise device in my room! They literally think of everything here and don't get me started on the bed....best nights sleep I've had in years! My only regret is not booking a longer stay. We will definitely be returning here!!More 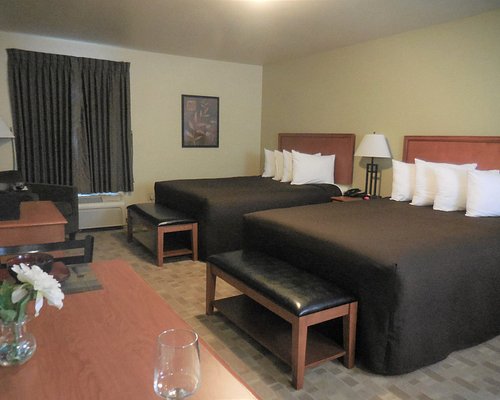 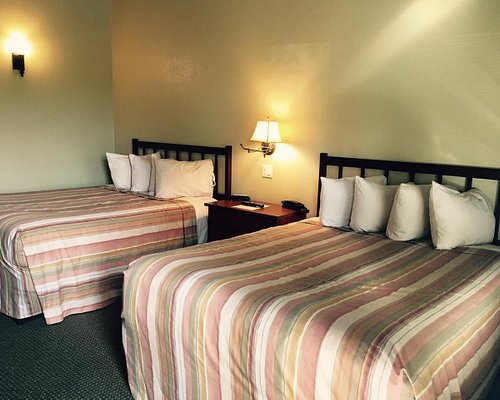 18% less than usual
Breakfast included
Kenai Airport Hotel
US$89
Booking.com
View deal
Free cancellation
Reserve now, pay at stay
Expedia.com
US$80
Hotels.com
US$80
Agoda.com
US$89
View all 12 deals from US$80
64 reviews
7.3 km from Eagle Rock Lodge
We compared the lowest prices from 12 websites
Uptown Motel
US$99
US$96

My father and mother in law checked in and thankfully were able to get another room since there was no way to close the bedroom door so that we had two sleeping quarters. We were right underneath the owners/managers and our parents were next to them. When my husband and I got to the lodge after fishing all day, we found a nice room and slept fine. The next day was totally different. We left pretty early to get our nets in the water and returned around 1:30. We were greeted by the owner’s child stomping above us. Not just stomping, jumping in one location with all his might. There was no point in complaining because it was midday and children will be awake. The owners left for a while and we were able to nap. They returned around 8pm, apologized for the noise, and the stomping began again and was going on for hours until the child went to sleep. Though this did not stop noises; the walls were so thin that we could hear them upstairs going about their business. When we retired to the bedroom, we could hear them talking, full on on conversations. We were woken up around 8:30am by the stomping and loud banging. It was absolutely ridiculous. My parents could hear everything because they were next door.

We are not sure if it is bad throughout the lodge or just next to them, but we don’t want to come back to find out. The owners did apologize for the noise the child produced as we were leaving, but the impression was already made and the damage done.

The amenities were nice and the rooms looked great, but prior soundproofing planning should have been taken. The traffic noise was extremely audible as well as the noise from the other room. There are no landlines to call the managers and with some spots without service meant we could not call anyone especially if there was an emergency.

When given our door code, we were not given the room number. We had to find them in order to get it which took about 10 minutes.

We also had a broken coffee pot that had a cracked bottom. We were expected to put it in the trash ourselves instead of the owners doing it as soon as they found out there was an issue and replacing it.

This review is the subjective opinion of a TripAdvisor member and not of TripAdvisor LLC
Karen F
Ottertail, Minnesota
195
Reviewed 7 August 2017
Made our whole trip!!!

We traveled as a family and had 3 rooms. We were all impressed and so happy we chose this location. The rooms were clean, beds were so comfortable and well supplied. They had a fire pit,grills. tables outside your room and location was so close to shopping.
The owners were available for all our needs and went out of their way to help us any time we asked. They were wonderful. If you want a great place at a great price and location give this place a try!!!!

This review is the subjective opinion of a TripAdvisor member and not of TripAdvisor LLC
Whisper81
Bologna, Italy
18978
Reviewed 11 July 2015 via mobile
Nice stay for one night

I was not happy at all when I get there and didn't find anyone... We had to call the owner but you know, international calls are not exactly cheap... Apart from that, the room was clean, the bed comfortable, WiFi works great. Not bad!

Stayed in the two bedroom appartment. Large lounge and kitchen with all utensils etc. Two bedrooms one larger than the other. Very friendly owners and nice accommodation. Only problem really is the location half way between Kenai and Soldotna which meant 15 minutes by car to eat or for entertainment.

This review is the subjective opinion of a TripAdvisor member and not of TripAdvisor LLC
G-Man3221
Merritt Island, Florida
714
Reviewed 11 September 2014
Very nice experience

In August 2014, my wife and I, both senior citizens, had the pleasure of staying at the Eagle Rock Lodge for several nights. Randi, one of the co-owners is one of the most efficient folks that we met while in Alaska. She was very accommodating with all of our needs. One night their hot water boiler went out late in the afternoon. Randi was quick to apologize and even offered to put us up in another property. We elected to stay with her and before bedtime the boiler was up and running with all of the hot water needed. It didn't even rise to the occasion of being a nuisance. In an effort to compensate us for the very minor inconvenience she didn't charge us of one of the nights that we stayed. In my life, she's a very good businesswoman and inn keeper. Her husband was just as concerned and worked hard to get the boiler fixed in a timely manner. When our Alaska travels take us to the Soldotna/Kenai area, the Eagle Rock Lodge will be first on our list. Mike and Lauri

Room tip: I rated it loud only because we were in a front room located on a major highway. The traffic noise at night was uncomfortable but not terrible. When we next return, and we will, we'll ask for a room in the rear. It probably would have been OK but it was warm and we needed to keep the windows open. We probably should have requested a fan and I feel sure it would have been promptly made available. Therefore, we take some responsibility for not asking. Mike and Lauri
Ask G-Man3221 about Eagle Rock Lodge
Thank G-Man3221