PricelineUS$18
ZenHotels.com
Trip.com
View all 11 deals
Prices are the average nightly price provided by our partners and may not include all taxes and fees. Taxes and fees that are shown are estimates only. Please see our partners for more details.
Sangsomset
Helsinki, Finland
16964

See all 81 reviews
Nearby Hotels 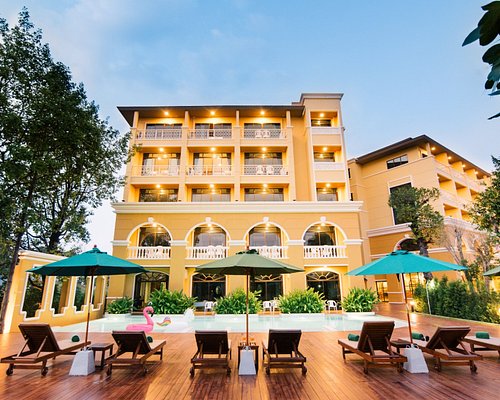 Sponsored
The Pineapple Hotel
US$20 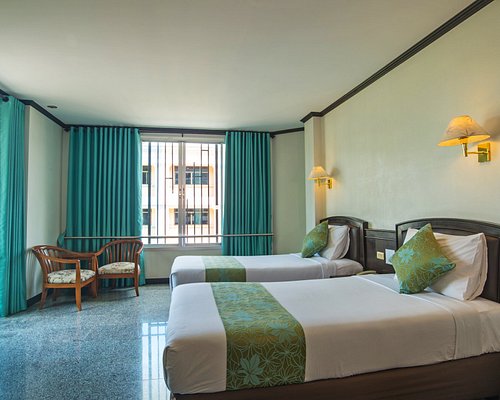 Top Rated
Green House Hotel
US$24
US$14
Tripadvisor
View deal
Hotels.com
eDreams
Expedia.com
US$24
View all 11 deals from US$14
178 reviews
0.5 km from Thai Hotel Krabi
We compared the lowest prices from 11 websites 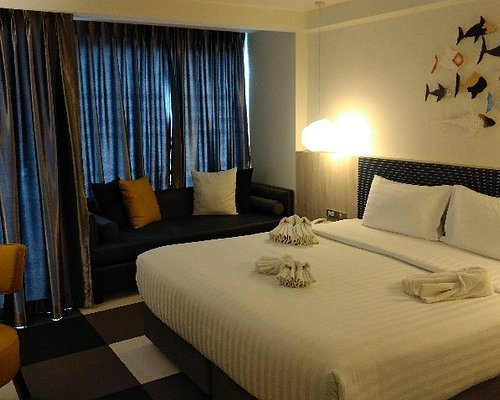 Hotels.com
View deal
Travelocity
FindHotel
US$20
Expedia.com
US$22
View all 12 deals from US$20
38 reviews
1.7 km from Thai Hotel Krabi
We compared the lowest prices from 12 websites
Breakfast included
The Nice Hotel

Hotels.com
View deal
eDreams
FindHotel
US$13
Expedia.com
US$18
View all 15 deals from US$13
63 reviews
0.7 km from Thai Hotel Krabi
We compared the lowest prices from 15 websites
Top Rated
Sponsored
Green House Hotel
US$15

I arrived quite late at night and was told there was no fan room, but then when I turned to leave, there was suddenly a fan available.

I paid 380 Thai Baht, and this was a largish room, attached with TV. There was only one English channel and all the lights were broken except one, making it a little dark. The worst thing, by far, was the fan, which was over the bed attached to the ceiling, but it was very small and rotated 360 degrees, with no way to change it's movement, so it was hardly on me. It was quite an uncomfortable night because of this.

Room tip: Look up at the fan ... and turn it on. Turn the lights on as well.
Ask lifemagic about Thai Hotel Krabi
Thank lifemagic

This review is the subjective opinion of a Tripadvisor member and not of TripAdvisor LLC.
TripJNorwich
Norwich
4
Reviewed 11 May 2012
need renovation

This review is the subjective opinion of a Tripadvisor member and not of TripAdvisor LLC.
Bodie P
LA
10167
Reviewed 11 March 2012
A great base for the non-descerning traveler at killer prices

This is a "get what you pay for" hotel. It's very well located near all the cooler shops/restaurants in the Chao Fa area. We had a standard room - it was spacious, clean, though it showed a lot of wear. Wifi and dresser as well as a TV. The best thing about it was the 520 baht price we got - about $17 US. The staff were lovely, but do your laundry elsewhere as their prices were high for the area. Didn't see the rats another reviewer claimed, nor was the view anything but yuck from our room. But if you're in your room in Krabi enough to comment on details, you probably weren't on vacation. One complaint - while we were there a number of Thai groups, as well as some school groups, passed through and they were very noisy til around midnight. Overall I still recommend it for a cheap clean well located place from which to explore a one of the most beautiful regions in the world.

This review is the subjective opinion of a Tripadvisor member and not of TripAdvisor LLC.
Tubador
Nakhon Si Thammarat
3931
Reviewed 3 January 2011
Nice enough, save for the rats.

Nice enough hotel for a dated and characterless sort of place (which is occasionally a good change from intimate or colorful guesthouse) until a steady parade of rats kept me awake all night. When I brought it up at the front desk, they said, "No, we don't have rats here." If I thought it would've been worth arguing, I would've brought down a handful of droppings. Instead, I left.

This review is the subjective opinion of a Tripadvisor member and not of TripAdvisor LLC.
Ezziebahnezzie
Worthing
5850
Reviewed 8 August 2010
Nice hotel

we stayed for 2 nights and were lucky to be upgraded to standard room on the fifth floor - try to get one on the high floors as the view is great! Staff were quite helpful, though they were all very young. Wi-fi didn't work in room - we were too high! But the room was large with cable TV. Seemed very clean with a big bed. After backpacking in all manner of hostels it was nice to be in a hotel for the same sort of price!

The breakfast there is pricey but if you come out of hotel and turn left, there is a small food court at the end of the road by roundabout that does great egg roti for around 15bhat. Yum!

so it was a decent hotel for a decent price. Nothing to rave about really but nothing to complain about either!

This review is the subjective opinion of a Tripadvisor member and not of TripAdvisor LLC.
View more reviews
PreviousNext
1…789…
<script type='text/javascript' crossorigin='anonymous' a