Residence Inn Roseville
Residence Inn Roseville
Lowest prices for your stay
Lock in the lowest price from these sites
US$184
Free cancellation until 09/12/21
View deal
Expedia.comUS$184
Residence InnUS$184
Hotels.comUS$184
PricelineUS$184
eDreamsUS$184
Orbitz.comUS$184
View all 15 deals
Prices are the average nightly price provided by our partners and may not include all taxes and fees. Taxes and fees that are shown are estimates only. Please see our partners for more details.
chrissA1622LB
San Francisco, United States
41

Acceptable, clean, neat, staff helpful. The biggest draw back is the air conditioning system currently being used. It's a portable unit in your room that is vented out through a window but that also creates a gap where not only hot air gets in but so does noise. This hotel has a very nice firepit in the center of the hotel outdoors. One night voices rose from 3-4 people around the pit until 2:30 am and I could not sleep as the noise was very animated.
*
The printer did not work so I could print boarding passes and the staff did not know how to fix it. Staff was helpful in trying to print on their printers but it took them a while to figure it out.More

Show less
Room tip: Facing out not towards the fire pit.

Thank you for choosing to stay a providing your honest feedback on the Guest Satisfaction Survey.

Providing the highest level of hospitality is our number one priority and we sincerely apologize for falling short of meeting your expectations. As a teachable moment, we have shared your feedback with the appropriate hotel team to ensure the necessary guidelines are in place to prevent things like these from occurring in the future.

Once again, thank you for taking the time to share your feedback. We appreciate you choosing to stay with us during these unusual times.

Report response as inappropriateThank you. We appreciate your input.
This response is the subjective opinion of the management representative and not of TripAdvisor LLC
See all 152 reviews
Nearby Hotels 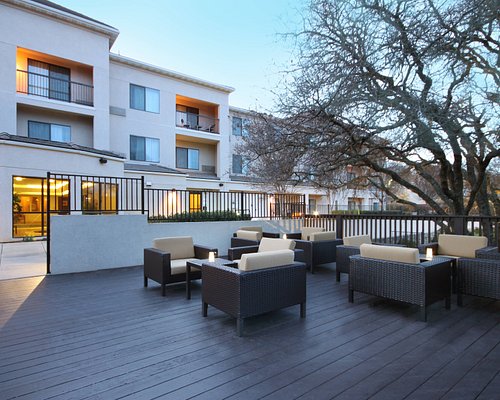 TownePlace Suites
View deal
Free cancellation
Expedia.com
US$174
Trip.com
US$172
Booking.com
US$174
View all 17 deals from US$172
194 reviews
4.8 km from Residence Inn Roseville

Taking safety measures
We compared the lowest prices from 17 websites
Breakfast included
Home2 Suites by Hilton Roseville Sacramento
US$167
Booking.com
View deal
Expedia.com
US$165
FindHotel
US$141
Lol.travel
US$200
View all 17 deals from US$141
103 reviews
4.8 km from Residence Inn Roseville

Expedia.com
View deal
Booking.com
US$167
Trip.com
US$165
Traveluro
US$199
View all 17 deals from US$165
289 reviews
0.3 km from Residence Inn Roseville
We compared the lowest prices from 17 websites
Top Rated
Breakfast included
Hyatt Place Sacramento Roseville
US$177

We had a terrible experience at another local hotel and after actually walking in and checking out the rooms in a number of suite-style hotels in the area, we chose the Residence Inn Roseville.

All the staff were friendly, professional, and helpful. Adrienne and Alice were especially great. We were lucky to get a room there when we did, as the next day Tahoe was evacuated due to the fire and hotels were suddenly filled with evacuees.

The room was very well laid out, plenty of room, excellent dining space, and a working space close enough to the TV to plug in an HDMI cord! Handy! Would be nicer if they let you change the input though. The pullout sofa was as comfortable as any pullout sofa (rock hard, not comfortable), and the kitchen was nothing fancy, but it really did have everything you needed for an extended stay.

We'd have preferred a King, but they only had a suite with the Queen. The bed was comfortable, and again, plenty of places to plug in. It's not uncommon, but I really wish there was a door or curtain between the sink with it's very bright light, and the bed. Gratefully the Bath/toilet has a capable vent fan, which is rare, and the shower has an equally rare wire shelf to put your own stuff in. Two would be better though.

I've never really had a "preferred property", but I think I do now. Thanks for the really pleasant stay!

This review is the subjective opinion of a Tripadvisor member and not of TripAdvisor LLC.
AreWeHavingFunYet
Olympia, Washington
686422
Reviewed 10 July 2021
Residence Inns Are Always Great

We like to stay at the Residence Inns because of the large fully equipped units. It's so convenient to have a kitchen and room to spread out. The room was clean and comfortable. Breakfast was good and Desk Staff very nice and friendly. The only thing that we wish they wouldn't do is charge for parking. Self-parking is outside the hotel (not a garage), so why the extra charge?

This review is the subjective opinion of a Tripadvisor member and not of TripAdvisor LLC.
John D
Sacramento, California
131
Reviewed 2 January 2021
Nice Place

This is a typical newer generation Residence Inn with apartment like rooms located along a common corridor on multiple floors. This property was renovated recently and everything is in good order. Check in was very friendly and I couldn't think higher of the front desk staff They were just great! They went a little further with me because I am going to be here for an extended period of time. This will be my home for a while while I relocate.

The dishwasher is a little smaller than I have come to expect. The plates don't fit in, actually, unless you lay them down. But it does the job and even has a longer "sanitize" cycle for these unhealthy times. The selection of dishes was complete and in good condition. No oven in the kitchen area but that is typical Residence Inn for these later generation properties.

Might have some plumbing issues here. Sometimes have trouble getting the toilet to flush properly and just have to keep trying when that happens.

During the Covid-19 pandemic housekeeping is no longer daily but by request but I was able to schedule a recurring weekly appointment which I actually prefer anyway. The housekeepers have done a consistently excellent job. I can't make any criticisms whatsoever on that score.

This hotel has the same problem I find with most hotel properties of any brand that consist of rooms off a common hallway. Lots of tightly sprung slamming doors with loud latching mechanisms, conversations echoing to all the rooms from the people and hotel staff in the hallway, the walls separating the rooms a bit thin. This does take some of the privacy away from you which bothers me more than a little. I listen to TV with headphones which helps but it shouldn't be necessary to do that. Again, this is a common problem in hotels. Would just like to find one where it isn't but so far no such luck. Earlier generation Residence Inn with exterior doors in multiple buildings were quieter except for the occasional people partying outside in the yards.

The internet access is excellent! I am a Titanium Bonvoy member so maybe I get enhanced access but I am very pleased. It is all wifi (no ethernet cable connections).

The parking is adequate and the neighborhood feels safe. It is right next to Interstate 80 so you do hear traffic but it is not very loud and you quickly get to the point where you don't notice it. I sleep fine (albeit, the pillow top mattress is a little soft and takes a couple of nights to get used to).

All in all, this is a nice place. I recommend it if you can live with the drawbacks of the sometimes rude guests sharing the space with you.

It is always encouraging to hear positive feedback, particularly when it comes from those who matter the most – you! By taking pride in putting people first, we are not only executing the mission of our founders but exceeding the expectations of our valued guests.

Please note your feedback has been shared with the hotel team as a critical way of understanding how we can continue to deliver great experiences. Thank you for staying at the Residence Inn Roseville and we hope you choose to create more memories here whenever your travels bring you back to Roseville.

Report response as inappropriateThank you. We appreciate your input.
This response is the subjective opinion of the management representative and not of TripAdvisor LLC
peskyh
Shreveport, Louisiana
5050
Reviewed 4 November 2020
New property with amenities

This is in a great location located across the parking lot from Top Golf. There are also some neat coffee shops, etc. close by. Our room was very nice and they provided a to go breakfast due to COVID. There is also a lot of walking/jogging areas nearby. I would stay here again...and go to Top Golf! There is also a great shopping center with lots of restaurants nearby.

We recognize your time is valuable and appreciate the feedback you have provided on the Guest Satisfaction Survey.

Maintaining a clean atmosphere within our guest rooms and common areas is always a key priority, especially during these unprecedented times. On behalf of the entire team at the Residence Inn Roseville, I sincerely apologize for falling short of not only meeting your expectations, but ours as well. Rest assured, the feedback provided will be shared with the appropriate hotel team to ensure we consistently deliver upon guest expectations.

Report response as inappropriateThank you. We appreciate your input.
This response is the subjective opinion of the management representative and not of TripAdvisor LLC
Booneshaya
1
Reviewed 25 December 2019 via mobile
Dried Blood

Stayed there recently for a wedding. The morning of our arrival I received an email stating that they were under going a major remodel. Too late to change hotels. Over $200 a night for a wedding with renting 10 rooms. Upon entering, sheets of plastic and construction going on all day from 8am. The free breakfast was located in one of the unoccupied rooms making it quite crowded. The final straw was in the elevator and what appeared to be dried blood on the floor. I contacted Marriot corporate office and they said since I didn't report issues at the hotel itself that the corporate doesn't handle compensation. I will NEVER stay at a Marriot or affiliated hotel in the future.

As part of our continued commitment to renew our property décor, we apologize for any inconvenience our recent transformation may have caused. Redefining the areas of renovation, will elevate the guest experience so we can continue to create new memories.