Not up to Marriott standards - Review of Sheraton Eatontown Hotel

US$189
US$169
View deal
Expedia.comUS$189
Booking.comUS$189
PricelineUS$189
View all 18 deals
Prices are the average nightly price provided by our partners and may not include all taxes and fees. Taxes and fees that are shown are estimates only. Please see our partners for more details.
TravelingTammy1
Sioux Falls, South Dakota
4947

Not up to Marriott standards

I've stayed here many time for work. Never did I have a visit that held up to my Marriott expectations. The hotel is very nice. The issues I had were more with the staff...front desk, cleaning, and maintenance. My stays were pre-Covid. Hopefully by now they've made enough changes that you'll get the type of Marriott customer service you'd expect.More

Thank you for your review and feedback. We apologize that you were not satisfied with your recent stay. We appreciate helpful feedback, as we are always looking for ways to improve the customer satisfaction. Thank you again, and we hope you consider staying with us again.

Report response as inappropriateThank you. We appreciate your input.
This response is the subjective opinion of the management representative and not of TripAdvisor LLC
See all 77 reviews
Nearby Hotels 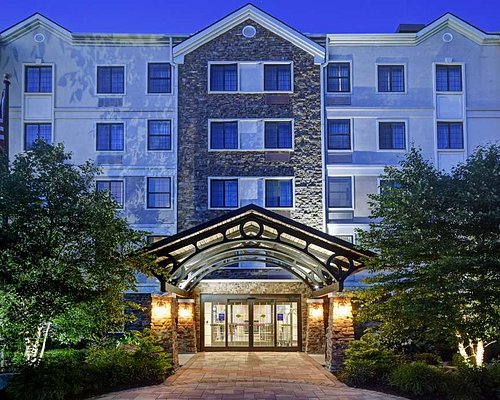 DoubleTree by Hilton Hotel Tinton Falls - Eatontown
US$132
US$127

Expedia.com
View deal
Free cancellation
Pay up to 12X
Quality
US$81
Hotels.com
US$90
Tripadvisor
US$81
View all 17 deals from US$81
217 reviews
3.2 km from Sheraton Eatontown Hotel
We compared the lowest prices from 17 websites
Red Roof Inn Tinton Falls-Jersey Shore
US$93
US$80

I travel a ton - especially over the last 18 months - and too many times I’ve been on the receiving end of poor service, terrible food, and lackluster rooms. This hotel felt brand new inside, my room was spotless, and the food drinks were great. The staff was warm and polite - the bartender even stayed open a little later for a wedding party which was nice to see. I had also interacted with Heidi - who is typically in catering - but she was also to help me out with my room and take care of a few things for me. I would stay here 10 out of 10 times and look forward to returning. It’s also a great alternative from the typical motels and run down hotels when visiting the Jersey shore.

Room tip: They do a ton of weddings so book in advance and be mindful of parking.
Trip type: Travelled with family
Ask nickzirps about Sheraton Eatontown Hotel
Thank nickzirps

Thank you so much - this review made our day! We take great pride in our team, and we hope you'll be our guest again soon.

Report response as inappropriateThank you. We appreciate your input.
This response is the subjective opinion of the management representative and not of TripAdvisor LLC
WhosShemp
NYC
148172
Reviewed 29 June 2021
Poorly serviced hotel

This was by far the worst serviced hotel I have ever encountered. I checked in at 10pm only to find a small line of people complaining about inadequate housekeeping, no towels in the room, etc. Many stated things like "this is my one thousandth night in a Marriott hotel and you guys don't seem to have mastered the basics of a Motel 6." I figured people were just out of touch, perhaps snobby. Nope. They were right on the money. Upon check-in, I was told "we don't do housekeeping here unless you call in the morning and request it before noon." Weird. We went up to the room of this rather gorgeous hotel. I jumped in the shower only to find someone else's hair smeared on the shower and a hot water adjustment that went from "very hot" to "scorching hot" and then five minutes later decided it was only going to go from "very cold" to "cold." But, we sucked it up, took our showers, and turned in for the night. Several weddings made the expectation of quiet a bit unrealistic. Hotel had obnoxious motion sensor on the thermostat that made the room hot throughout the night. At 10am, I called and requested housekeeping come to the room, bring double the amount of towels (we used up ours to sop up a leaky tub), and I specifically asked the staff member to make sure someone pays extra attention to the fact that someone else's hair was in our shower. The person on the phone was carefree, so I made sure I asked her name. I had to call back because our safe was in the locked position upon our arrival. Maintenance actually arrived quickly THIS TIME. We returned to the room at 8pm. Housekeeping had not entered. No new towels, still foreign hair on the shower wall. I called down and requested someone come up and clean. They revealed that nobody was available on staff in the evening hours to address cleaning issues. They tried to spin it on me and asked if I had requested housekeeping before noon, which I had. I explained to them what I'll explain to anyone reading this now. This is absurd. The way that you make sure you don't lose track of who called you for housekeeping is to service every room every day, like every other hotel on the planet. And the way to make sure you can address housekeeping issues is to employ someone to address these issues 24/7. They offered me ten percent off for my troubles, but guess what...I still had to shower with someone else's mess on my shower walls for a second night. The $60 discount (that I have not seen yet, by the way) would not be enough for me to hire someone to come in and clean my room. The front desk brought up some towels...but not enough. Certainly not what I requested. I woke up and used the bathroom in the middle of the night, but the toilet wouldn't flush. It wasn't clogged. It just wouldn't flush. My whole family woke up at 8:45am and they were all pretty upset that I told them they couldn't use the bathroom until I resolved the toilet issue. I called the front desk and they told me there wasn't any maintenance man on staff at that hour. They couldn't address this problem for me until he arrived. So I had to watch Youtube videos on how to fix this weird assisted flushing toilet. I fixed it myself. Maintenance man showed up just as we were checking out. Pool was ice cold, chemicals must have been really off as my kid's eyes were really red afterward. Gym was really hot (and the thermostat was locked). Not enough body wash for three people.

Room tip: Ask to be away from wedding blocks. Request housekeeping in advance. Or just avoid this place.
Ask WhosShemp about Sheraton Eatontown Hotel
1  Thank WhosShemp

We're so, so sorry that you had such a negative experience. We tried looking up your name in our reservations database but we couldn't find any matching guest names to help us investigate the specifics. We hope you'll contact our management with more information and so we can extend a personal apology.

Report response as inappropriateThank you. We appreciate your input.
This response is the subjective opinion of the management representative and not of TripAdvisor LLC
chrisxyr
Lacey Township, New Jersey
34
Reviewed 29 April 2021 via mobile
Sheraton Eatontown - Great Experience

I decided to create a hotel block for my wedding in early April at the Sheraton Eatontown Hotel. My entire experience was excellent.

My wife and I stayed in one of their suites. The room was huge, very clean, and contemporary.

After our wedding concluded, family and friends, gathered at their bar/restaurant. It was spacious and clean. The bartender, Christian was very nice, and attentive to all of our needs.

A lot of the credit is due to their General Manager , Clint. From the moment we decided to book the block , to when we checked out , he was very hospitable, assisted us with the entire process, and made sure we had everything we needed.

I would absolutely recommend this hotel, to anyone that is considering to stay there.

Thank you and congratulations! We're proud of our team and so glad that they took good care of you.

Report response as inappropriateThank you. We appreciate your input.
This response is the subjective opinion of the management representative and not of TripAdvisor LLC
Relax297905
Reading, Pennsylvania
2
Reviewed 20 April 2021
Great Hotel and Customer Service

Thank you so much! We're very proud of Matt and the rest of our team, and we wish you safe and happy travels.

Report response as inappropriateThank you. We appreciate your input.
This response is the subjective opinion of the management representative and not of TripAdvisor LLC
Ed P
fort lauderdale
1921
Reviewed 19 December 2020 via mobile
Worst experience I’ve ever had at a hotel

I will simply say that I stayed here for 30 days , in two rooms, and after hotel stays at over 100 different hotels, this is the worst experience I’ve ever had by far. The management seems to be unaware of what customer service is.

I believe this is related to a dispute about whether one room or two rooms would be comped for two nights of the stay. We apologize for the confusion, and hope you'll consider giving us another chance in the future. Thank you and take care.