US$105
View deal
Expedia.comUS$105
Booking.comUS$105
Hotels.comUS$105
PricelineUS$105
eDreamsUS$105
TravelocityUS$105
View all 19 deals
Prices are the average nightly price provided by our partners and may not include all taxes and fees. Taxes and fees that are shown are estimates only. Please see our partners for more details.
M2DJA
406

We had a positive impression from the moment we drove up to the property. The grounds were clean. The lobby was fresh and airy. It smelled extremely clean. It was inviting and comfortable. The receptionist, Marlon, was so professional, friendly and efficient. The check in was fast. The luggage carts are ones like at the airport (vs porters’ carts). So smart!! Compact and very maneuverable. Plenty of convenient parking. Lots of amenities including pool and fitness room. And, they welcomed our dog. Water bowl and treats in the lobby. The room was so comfortable and VERY CLEAN!! The bed was great — we slept so well. Lots of natural lighting and roominess. The breakfast was really nice. Cereal, juices, Coffee, tea and yogurt with fresh fruit. (May have been other things but I didn’t notice). Although the hotel is conveniently located by the Trenton airport and interstate, the room was very quiet. Eating places nearby were good. Local restaurants with good food and service. Also had a vending area and selection of microwaveable dinners, and wine. We had a small issue with the room but we didn’t mention it until we checked out. We will definitely stay here again. We are so happy to have discovered this new hotel which feels current and a little more than a typical chain hotel. Thank you!More

Show less
Room tip: Upper floor was quiet although the lobby wasn’t too noisy
See all 424 reviews
Nearby Hotels 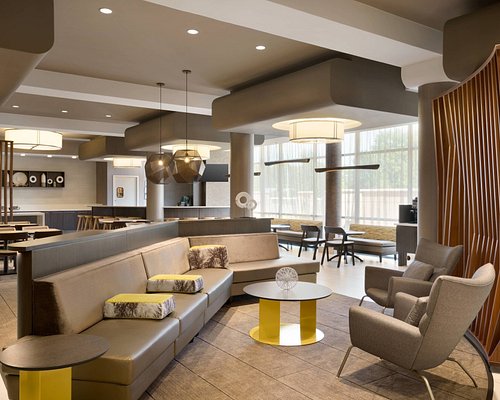 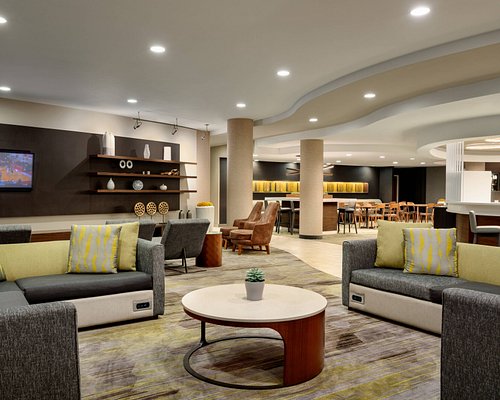 Expedia.com
View deal
Pay up to 12X
Booking.com
US$91
Trip.com
US$80
Lol.travel
US$103
View all 21 deals from US$80
168 reviews
9.3 km from Element Ewing Princeton
We compared the lowest prices from 21 websites
Hilton Garden Inn Princeton Lawrenceville
US$149
US$125

Hilton Garden Inn
View deal
Booking.com
US$125
Expedia.com
US$125
Lol.travel
US$149
View all 20 deals from US$124
108 reviews
8.7 km from Element Ewing Princeton
We compared the lowest prices from 20 websites
Breakfast included
Hampton Inn & Suites Newtown
US$114

Courtyard
View deal
Free cancellation
Booking.com
US$103
Expedia.com
US$103
Priceline
US$103
View all 18 deals from US$103
349 reviews
11.6 km from Element Ewing Princeton

It’s March 2nd and I’ve spent 36 days in a Marriott already this year. I’ve also stayed in Marriotts 328 times over the last 4 years. I state this only to say I’ve been a loyal Marriott customer and am very familiar (and pleased) with their standards for customer service and integrity. I’ve even spent almost 3 weeks on 3 separate occasions at this location this year because the rooms were spacious, contained a full size fridge with ice maker and microwave (basic kitchenette) and they were reasonably priced. I got over the lack of water pressure and convinced myself it was good for the environment. Having said that, I am also 100% certain this is the absolute worst Marriott experience to date all due to the lack of communication and lax management of the site manager, Amal Wright. I accidentally left something very important to me hanging in the bedroom closet - a jacket that was given to me by my stepfather. I hadn’t packed it because I never pack it in my suitcase in case my suitcase gets lost. I was checking out on the month anniversary of his death and my head was somewhere else. As I drove to the airport, I realized my mistake and called the hotel. I told the front desk my room number and asked that they hold my jacket for when I was returning in 3 days. I also asked to be called back with confirmation. No call. I called 5 more times over the next 2 days before before returning. No one seemed to know what was going on - and the front desk doesn’t have access to the housekeeping lost and found and apparently there is no log. I was also told items are thrown away after 2 weeks. After several messages left and no return calls received, I finally get in touch with the manager on Monday (after checking in late Sunday) who claims to have never heard about the situation, says I have no proof of leaving the jacket, says no one in housekeeping would have taken it, and only one guest was there since and would not have taken it because he was a man. She expressed no concern and no desire for follow up - and even tried to claim that they’ve never had any incident of missing items (which after reading reviews I know is compketely false). I am at the location now and will be checking out 4 days early and going to a different hotel. Items get lost and mistakes happen, but the utter disregard and arrogance of this manager has made me question my loyalty to Marriott. I’ve canceled my next 5 reservations at Marriott properties with no regrets. I have over 600k Bonvoy points and am tempted to buy hotel stays with the points and pass out vouchers to the homeless. In fact, that sounds like a great idea.

This review is the subjective opinion of a Tripadvisor member and not of TripAdvisor LLC.
Matt R
33
Reviewed 27 February 2020
The Emperor Has No Clothes

Complete miss on the basics of hotel operation. Our stay there was an unmitigated disaster. A short list:

Upon arriving late Thursday night with half asleep 8 and 10 y/o kids, I waited nearly 10 mins to check in as it took both front desk employees to help the one guest in front of me. Then you told me the wrong room number, and argued with me that you didn't until I showed you the key sleeve that had the incorrect room. My wife and kids had pushed the heavily loaded luggage cart all the way down the hall only to be yelled at by the guest whose room you sent them to.
Side door (to parking lot) was broken and I had to walk 50 yards in 20 degree weather to the other door. There were no sheets or blankets for the pullout couch, and it took two calls over 15 minutes (at 10:30pm) to get them.
And the pool had "closed indefinitely" over a week ago due to a broken heater (you're a Marriott property... you can't repair/replace an indoor pool heater in over a week?) It would have been nice if someone mentioned that to me any of the 3 times I called in the week leading up to our arrival.
The kicker was the fire alarm that went off on Sunday morning at 8:30am. We stood outside behind the hotel in the freezing cold for almost an hour with no update, info, or even a representative from the hotel to come check on us. But it's not like we were sleeping... the constant noise all weekend long throughout the night along with the pungent smell of pot smoke made it hard to sleep.

This review is the subjective opinion of a Tripadvisor member and not of TripAdvisor LLC.
Heather R
Millville, New Jersey
717
Reviewed 3 January 2020
Noisy Night Of Zero Sleep

We stayed here for one evening on Friday 9.6.19. Hotel is nicely designed and appears very clean. Check in was super efficient and not a hassle at all. Our room had the space we needed and was very clean. The bed was fairly comfortable. I am only giving three stars due to excessive noise. Given the misery of our stay, it probably should be two stars. There was some sort of issue at a nearby room in the very early am hours (1-2am). A baby was screaming for hours on end. Hotel personnel were in or near the room addressing whatever the issue was with the room. Their door remained open and there was nothing blocking the screaming baby from sounding like it was directly in our room. We didn't bother to call front desk over this since hotel personnel was fully aware since they were right there. Other hotel guests also opted to walk up and down the halls talking loudly late at night and early am. The room doors are so thin they block virtually no noise. We barely slept and were not happy going home the next day. I think we went to bed at 8pm the following night since we were so exhausted.

This review is the subjective opinion of a Tripadvisor member and not of TripAdvisor LLC.
yvonne23cl
1
Reviewed 27 December 2019
Beautiful Hotel

This review is the subjective opinion of a Tripadvisor member and not of TripAdvisor LLC.
RelaxedfromNJ
1
Reviewed 19 December 2019
Dirty rooms, live/dead bugs, big rooms, nice layout

Really, REALLY wanted to like since am an Eco person. Couldn't. To me cleanliness is #1. Lobby area nice. Love the luggage carts. Enjoyed happy hour though tv to low to hear (near to hear Jeopardy!). While chilling in my room and watching tv out of nowhere a bug falls from the lamp in the den area (studio room). Freaky. I had to kill it. Then I noticed a second bug already dead in the kitchen floor area. Hair in bathroom, sink/toilet were clean. bed room floor had dirt on edges and here and there. Sheets/bed clean. Floors dirty, safe broken. Needs thorough cleaning and TLC, is worn and appears not maintained. This place failed in the rooms. Lobby nice, free wine/cheese happy hour. Like/love the eco but it isn't as important as cleanliness. Doubt I'll return even though I could stay here frequently, I expect more from Marriott.