Stayed here a few nights with a group of people. Liked the hotel and the fact that they re-purposed it from a restored factory type building. The beams and the bricks, as well as the warehouse type sliding bathroom door (tad difficult to open/close ) were really interesting. Had an elevator and the rooms were nice and large. A bit of a minimalist theme which was architecturally cool, limited functionality a bit IMHO. Case being, limited places to put sundries in the bathroom, hard to turn on shower around glass without getting a douse of cold water on you, small desk for putting stuff. In room air conditioner starts and stops at night if you are a light sleeper. The platform bed, which was comfortable, was difficult to get out of for me.
These were not a big deal, but minor issues.
No ice machine in the building, but they would deliver if asked. Baggage is on your own.
On the plus, great ambiance, nice waterfall on property, close to town, large room, big bathroom, refrigerator, coffee machine, safe, elevator, lots of parking, clean and quiet. Wake up calls were a knock on the door which could wake you up if you are adjoining which was unusual.
The included breakfast was good especially the bacon.
Would stay here again.More

Thank you for your feedback! I hope you will have the opportunity to come visit us again soon.

Report response as inappropriateThank you. We appreciate your input.
This response is the subjective opinion of the management representative and not of TripAdvisor LLC
See all 281 reviews
Nearby Hotels 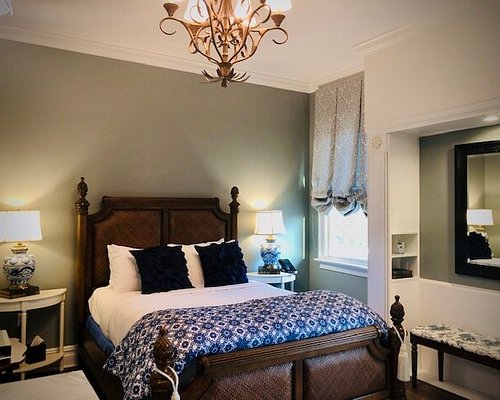 Taking safety measures
We compared the lowest prices from 10 websites 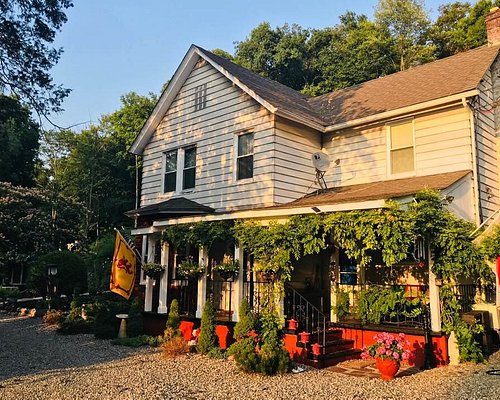 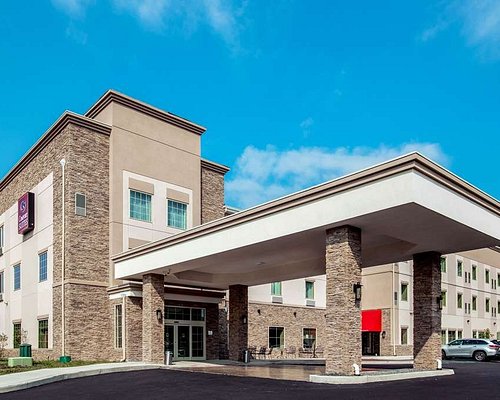 Expedia.com
View deal
Free cancellation
Reserve now, pay at stay
Residence Inn
US$209
Booking.com
US$209
Hotels.com
US$209
View all 19 deals from US$209
97 reviews
6.2 km from Roundhouse

We enjoyed our stay in this hotel very much, but wish we had known to.... (1) bring an umbrella! There are no loaners; (2) be aware that there are no local maps or guides pointing out local attractions or how to get to them; (3) recognize that most of the rooms are in a different building from the restaurant where breakfast is served and this can be a bit confusing at first, especially since there is nothing to identify the restaurant from the street. The geography is a bit confounding, but you'll make it. The beds are comfy, the desk staff is very friendly and helpful, the temperature control worked, the lighting was OK, the breakfast was OK, and the wifi was OK if a little slow. The location can't be beat, right on the end of Main Street. We'd stay here again on a return trip to the area.

Thank you for visiting with us and for your feedback! I do hope your schedule will allow you to come visit us again soon. Winter is magical in the Hudson Valley.

Report response as inappropriateThank you. We appreciate your input.
This response is the subjective opinion of the management representative and not of TripAdvisor LLC
given90405
Santa Monica, California
1
Reviewed 16 October 2019
Average experience, not premium. Profoundly disappointed.

It started on the wrong foot when we walked into room 121 with its beautiful ground level view into the parking lot. Not exactly what the pictures of the Roundhouse and water falls led me to expect. And the rate is the same premium as other rooms. That evening at midnight the heat pump on the adjacent lobby front desk turned on for an hour. It rattled in our room until I got up and asked the night desk to turn it off. Management and customer service was inconsistent at best, non-existent or rudimentary. The restaurant and patio bar was very nice, but management seemed totally disconnected as to whether to seat and serve people at the patio bar. Finally, a positive improvement would be to give the rooms a little more furniture and lighting. It is as spare as a cool Chelsea hotel of about 1/3 the area.

Room tip: Pick a room in Roundhouse or upper floors with view of falls. Any other room should be at a 1/2 price rate.
Ask given90405 about Roundhouse
Thank given90405

Thank you for your feedback. I am sorry you did not enjoy the brand new Mill Deluxe room. Some guests prefer the ground floor, others prefer higher floors. Rooms are assigned randomly in category. We are happy to accommodate floor requests subject to availability. Upgraded rooms in the Roundhouse have spectacular views of the waterfalls and are priced accordingly.

Our patio is open for dining all season until mid October. Unfortunately, weather is beyond our control and at times, we have to close the patio and serve instead in the lounge.

Our transformation of a 200 year old abandoned factory into the chic boutique hotel is the beacon of Beacon. We are proud of our design team. We will be happy to provide a tour of all room options if you have the opportunity to return to our bucolic riverside city.

Report response as inappropriateThank you. We appreciate your input.
This response is the subjective opinion of the management representative and not of TripAdvisor LLC
Connector312684
11
Reviewed 17 September 2019
very overpriced hotel

For what this hotel charges it's outrageous that there are ZERO services.

Not even help with luggage upon checking in or out. And, by the way, they are in different buildings. We were given verbal directions and instructions which turned out to be confusing. We had no idea where to go. My disapppointyment in this hotel was just beginni9ng. Overall, the staff is incapable of solving a problem. We had to unload the car on a busy road and we were told "you have to do this quickly as the police come around!" Seriously, how about having staff around to help unload the car and bring the items to your room. Very disappointed.

Room tip: don't waste your money, decent enough rooms but much lacking for the price - Poor to no services.
Ask Connector312684 about Roundhouse
1  Thank Connector312684

I am sorry you did not enjoy your visit as much as we hope our guests do. We do have guest rooms in 2 buildings. Parking is plentiful, however as is very common in a city, we do not have parking directly in front of the Roundhouse building. Parking is about 200 feet from the front door. We do alert guests that parking in front of the building in a no parking zone will bring attention from police.

Rooms in the Mill building have parking directly in front of the building.

We are always happy to assist guests to ensure their visit is enjoyable. I am very sorry if you felt there was no one to help you. I do hope you enjoyed your visit otherwise. We have had a wonderful stretch of fantastic weather and Beacon has offered so many diverse, fun, artistic events all summer long for visitors. If you do get a chance to return, please allow us to help you in anyway to make your visit special.

Report response as inappropriateThank you. We appreciate your input.
This response is the subjective opinion of the management representative and not of TripAdvisor LLC
TravelinJoe47
Massachusetts
24279
Reviewed 12 September 2019
Perfectly Positioned in a Quaint City Atmosphere

The Roundhouse is a superbly refurbished factory that kept a lot of its charm to become lodging. Pictures of what it was like prior to the do-over are featured around the hotel. They had a lot of work to get this place up to code and far beyond. Rooms were comfortable - we opted to look over the falls - impressive view. Staff managed to provide a wide variety of choices for breakfast and they kept the serving trays full! The outdoor cafe provided great atmosphere as well as great food. HIGHLY recommend Roundhouse for a stay!

Thank you for your kind words. We are always happy to hear that a guest enjoyed our restoration of the 200 year old factory as much as we do! The restoration was a labor of love, as is our opportunity to provide a wonderful experience for our guests. I do hope you will have the opportunity to visit us again soon.

Report response as inappropriateThank you. We appreciate your input.
This response is the subjective opinion of the management representative and not of TripAdvisor LLC
E3048WXmargareth
42
Reviewed 3 September 2019
Some pros and many cons

This recently renovated hotel with a strong minimalist theme has some pros but also some big cons. On the con side, the decor is striking and the location very cool. Breakfast is included and is quite good. The mattress was excellent. On the con side, the minimalist theme has been taken to an extreme. There is no where to lay out an open suitcase but on the floor. We asked for a little rack to hold the suitcase and were told by the desk attendant that the hotel did not supply those (!!). Our room was very large and 1/3 of the floor space was vacant. a small couch and table would have made the room more functional and inviting. There was no where in bathroom to lay out ones' toiletries except on top of the toilet tank or on the floor. Really! and the towel hook was on the opposite side of the large a bathroom from the shower. The bathroom door was a sliding pocket door that was very noisy to open, and did not provide much privacy or noise damping. The room was very dark. We had 2 large windows that looked directly out on the parking lot. The only window treatment was a large blackout shade, which we had to have closed all the time so the people in the parking lot could not see us (we had a first floor room) The lighting in the room was quite dim. Given all the cons, 350$ seemed excessive.

Thank you for your feedback. Rest assured we do have luggage racks in each room and are happy to provide additional ones as needed. I am sorry if the new agent was misinformed and that you were inconvenienced.

I do hope that you enjoyed your visit to our artsy little city and were able to enjoy our vibrant Main Street, mountains and river. Beacon is a brilliant blend of old and new, vintage and contemporary, bright and subdued. We are honored to be part of the transformation and look forward to hosting you again one day soon.

Thank you again for your comments. We appreciate them all.

Report response as inappropriateThank you. We appreciate your input.
This response is the subjective opinion of the management representative and not of TripAdvisor LLC
View more reviews
PreviousNext
1…678…