SureStay Plus Hotel by Best Western Fayetteville
SureStay Plus Hotel by Best Western Fayetteville
Lowest prices for your stay
Lock in the lowest price from these sites
US$59
View deal
Expedia.comUS$59
PricelineUS$59
Hotels.comUS$59
TripadvisorUS$59
FindHotel
Lol.travel
View all 17 deals
Prices are the average nightly price provided by our partners and may not include all taxes and fees. Taxes and fees that are shown are estimates only. Please see our partners for more details.
Brie5125
Greenville, South Carolina
1

So compared to other hotels in the area it's not bad. The room was as expected for the price although there was an odor when we arrived and food left in the fridge. Our shower was broke and we were up well past midnight the first night waiting for a repair (and had to be up for an event early the next morning) so that was a negative they did a temp fix and then did offer us a new room the next morning but the beds were too small and due to timing we were not able to change rooms. They did get the shower working by time we got back to the room that evening that was a plus. It wasn't a great stay but not a horrible one either.More

Show less
Review collected in partnership with Best Western
This business uses tools provided by Tripadvisor (or one of its official Review Collection Partners) to encourage and collect guest reviews, including this one.
See all 260 reviews
Nearby Hotels 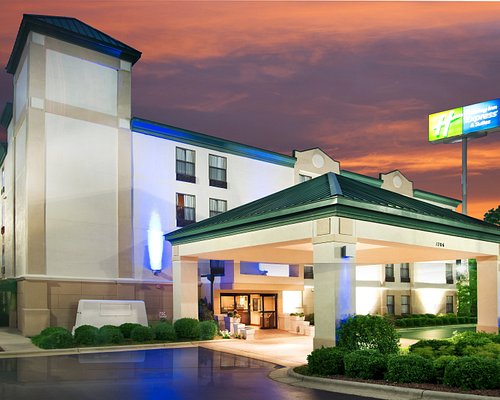 Travelocity
View deal
Orbitz.com
Traveluro
US$61
Expedia.com
US$63
View all 16 deals from US$61
148 reviews
9.3 km from SureStay Plus Hotel by Best Western Fayetteville

Taking safety measures
We compared the lowest prices from 16 websites
Red Roof Inn Fayetteville I-95
US$74
US$68
Tripadvisor
View deal
Pay up to 12X
Booking.com
Expedia.com
US$68
getaroom.com
US$74
View all 16 deals from US$68
195 reviews
0.3 km from SureStay Plus Hotel by Best Western Fayetteville

I thought for the price this is a great -place to stay. We get to Fayetteville NC about 1 or 2 times a year. This is our go to place to stay. The breakfast was very good and the worker in the breakfast area was one of the best I have ever seen.

Review collected in partnership with Best Western
This business uses tools provided by Tripadvisor (or one of its official Review Collection Partners) to encourage and collect guest reviews, including this one.
Ask pags4112021 about SureStay Plus Hotel by Best Western Fayetteville
Thank pags4112021

This review is the subjective opinion of a Tripadvisor member and not of TripAdvisor LLC.
sondras918
11
Reviewed 23 May 2021
Dont pick this place

Mom & I Travelling from Florida to New York just needed a clean place to rest our head for the night And we got anything but that dirty Dusty disgusting old Room to top it off we were woken up at 1:00 a.m. with a couple in the next Room fighting about Facebook and their young children playing outside and slamming doors as they came in-and-out of the Room
I complained To the front desk the woman was sympathetic when I called back an hour and a 1/2 later because it was still going on she said would you like to change your Room
I think she should have insisted these people move but they did not
Trust me if your looking to get a good night's sleep this is not the place to stay

This review is the subjective opinion of a Tripadvisor member and not of TripAdvisor LLC.
cmiataj
Randallstown, Maryland
6
Reviewed 20 May 2021
Just- Don't.

Our stay was not good. I traveled with my husband, two kids (11 and 13), and our dog, because they're a dog friendly place. Let me say first off that the girl behind the desk was friendly, efficient, and professional, which was great as we got in late and were all tired. But then we went to the room- 152. The room. Dear Lord. Upon opening the door, we were hit with a horrible smell- like pet urine, cigarette smoke, and mildew all mixed together. I got the impression that housekeeping had cleaned, as none of the visible surfaces seemed unclean, but the room generally felt grimy. I thought about going back to the desk but I didn't, and I should have- but I was exhausted and it was late and we had been driving all day. And we still had to eat- so while we were out, I grabbed some Febreze and Lysol and air fresheners. I sprayed the beds, and we Febreezed the carpets and curtains. I think it used to be a smoking room turned nonsmoking, but without removing the carpet. I think maybe the carpet had been cleaned at some point during the transition to "non-smoking", but as a non-smoker who has asthma, I can *always* detect stale cigarette smoke. The smell was so strong, even after our attempts at improvement, that my daughter and I rested with our masks on all night. I did not sleep well at all, which is why I say "rested"; the beds and sheets appeared clean and I had sprayed them, but in the process of doing that, I noticed the mattress covers- which were stained and disgusting. I am 100% positive at least one of those stains was old blood- and maybe the cover was washed, but at that point, it just needed to be tossed and replaced. It was gross, so I didn't sleep under the covers and slept fully clothed. In the morning, when my husband attempted to take a shower, the shower handle came off in his hand- so none of us got a shower and we had another day of travel ahead. It was so disappointing- Easily the worst hotel room I've ever stayed in, and this with me almost being killed by a collapsing bathroom ceiling at a hotel in NJ some years ago. That room flooded and the ceiling collapsed and cracked the toilet tank in half, just as I was going to sit down- and this room was still worse.

Location was ok- a little sketchy, but as long as you don't venture out alone at night it's fine. It was quiet, but then it's bordered by an old cemetery, so it probably should be, lol.

As I said, I didn't go back to the desk and I should have, because I was literally feeling sick all night and my daughter was, too- our asthma is pretty sensitive. The woman who checked us out was also professional and efficient.

But as a place to stay? Never, ever again.

Room tip: No idea, our room was so gross, I can't recommend it at all.
Ask cmiataj about SureStay Plus Hotel by Best Western Fayetteville
Thank cmiataj

This review is the subjective opinion of a Tripadvisor member and not of TripAdvisor LLC.
bryanelliot28
Cape Coral, Florida
1
Reviewed 14 May 2021
Needs renovations

Being this hotel was has best western as a parent company we expected a lot more of it. Hotel was more of a trashy looking motel than hotel when compared with the nice new hotel next door . It smelled like marijuana and there were stains on the walls and floors in our room . Just felt plain dirty honestly like prostitution probably goes on there frequently , it was that type of place . Don’t stay there

Review collected in partnership with Best Western
This business uses tools provided by Tripadvisor (or one of its official Review Collection Partners) to encourage and collect guest reviews, including this one.
Ask bryanelliot28 about SureStay Plus Hotel by Best Western Fayetteville
Thank bryanelliot28

This review is the subjective opinion of a Tripadvisor member and not of TripAdvisor LLC.
princess70111
Four Oaks, North Carolina
2
Reviewed 14 May 2021 via mobile
It was ok.

We travel with a small dog which limits our options. Check in was great. Not immaculate, but not dirty. Beds were comfortable. Pillows not so much. Plenty of outlets. Exterior very well lit. This was both good and bad. The curtain in our room needs to be replaced or repaired. Dogs in adjoining rooms barked all night. Had to place the floor lamp, waste basket and a pair of shoes to keep light out of the room. Breakfast was excellent. Many options. Breakfast attendant was very attentive. Very clean also.