US$150
US$127
View deal
SAVE US$23
Hotels.comUS$127
Agoda.comUS$150
PricelineUS$127
View all 20 deals
Prices are the average nightly price provided by our partners and may not include all taxes and fees. Taxes and fees that are shown are estimates only. Please see our partners for more details.
Jon H
Columbus, Ohio
27466

I will give this hotel a solid 4 because of location and service. I opted for an ocean view room and that proved to be an excellent choice. The hotel was clean and the staff was helpful. There was a minor issue with my checkout but the assistant GM handled the problem right away. I did miss the breakfast bar re Covid. I did not think the grab and go bags were great but better than nothing during these times.
There was no maid service for our room during the stay. That may have been a covid issue as well.
The hotel being right on the ocean with great views and next to the life guard station with a LG on duty on the beach (great for kids), also near great restaurants.
The hotel needs a bit of upgrading, there was a pile of renovation trash on the property. But overall I liked it and would repeat. Solid 4.More

Show less
Room tip: Ocean view is worth the price.

Thank you for your feedback! We appreciate your kind words. Yes, housekeeping is limited at this time due to Covid. We hope you will come stay with us again!

Report response as inappropriateThank you. We appreciate your input.
This response is the subjective opinion of the management representative and not of TripAdvisor LLC
See all 1,125 reviews
Nearby Hotels 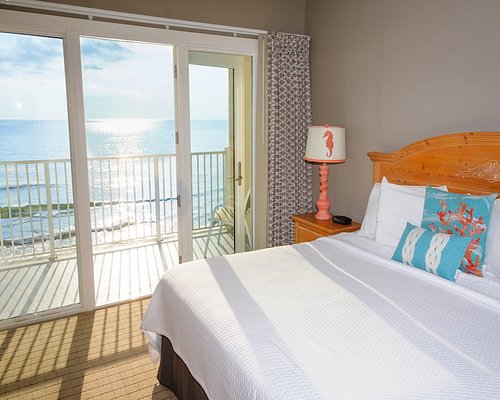 Taking safety measures
We compared the lowest prices from 18 websites
Breakfast included
Comfort Inn On The Ocean
US$189
US$161
Booking.com
View deal
Expedia.com
US$189
Hotels.com
US$189
Priceline
US$161
View all 17 deals from US$161
630 reviews
1.8 km from Best Western Ocean Reef Suites

The rooms needs to be deep cleaned and painted. There was mold in the grout of the tub and mold on the ceiling above the shower with paint peeling. It also had a musty smell. The air in the room and from the AC units was musty and stale. I felt the price was way to high especially Saturday night when the amenities are not available and the state of the room. I have stayed in top notch B&B that didn't cost the amount I paid for Saturday night ( I stayed 3 nights). Due to Covid they provided a bag breakfast with bottle water, a muffin (not good) small container of apple sauce and a granola bar. I appreciated the effort but could have been better. On a positive note the staff were wonderful. They were all very friendly and helpful.

Review collected in partnership with Best Western
This business uses tools provided by Tripadvisor (or one of its official Review Collection Partners) to encourage and collect guest reviews, including this one.
Ask sheri123 about Best Western Ocean Reef Suites
Thank sheri123

Thank you for your feedback! We have started our fall deep clean. Please come back and stay with us again!

Report response as inappropriateThank you. We appreciate your input.
This response is the subjective opinion of the management representative and not of TripAdvisor LLC
MangerAimerVivre
Virginia Beach, Virginia
2917
Reviewed 5 October 2020
A breath of fresh weed and cigarette smoke: disgusting

I booked this hotel as a final getaway with my 8-months pregnant wife before the birth of our child. One of the things that attracted me was the "100% Smoke-free hotel, including our balconies" policy. This is stated on their website along with a threat of a $250 fine for smoking on the premises. We checked in and headed to our room, which was decent...the place has seen better days and feels dumpy and dated. As we spent the $$ for on oceanfront suite, I was looking forward to some refreshing ocean breezes. All that disappeared when upon opening the door to the balcony, we were hit will a wall of cigarette smoke from another balcony. It filled the room and we closed the door. We tried several more times the first night and each time, there was smoke coming from one of the other balconies. Cigarettes and marijuana. I tried to call the front desk but neither of the two phones were operation so I had to call on my cell phone. I complained to the front desk the next day and was told they would look into it.

To make this short, nothing was done to address the smoking. Both weed and cigarette smoke were constantly in the air in the room. I complained several times to the front and was told that the manager would be there when we checked out. Surprise...no manager upon check out.

DO NOT STAY HERE!!!!! The place is a joke. The no-smoking policy is absolutely not enforced. They proudly display their NC health department sanitation score of C in the lobby. I should have walked out the moment i saw that.

We do our best to enforce the smoke free policy. The guest you mentioned was charged the smoking fee. We are sorry that you didn't enjoy your stay and we hope that you will come back and give us another try.

Report response as inappropriateThank you. We appreciate your input.
This response is the subjective opinion of the management representative and not of TripAdvisor LLC
Bob K
Richmond, Virginia
20387
Reviewed 2 October 2020
Average accomodations with Very Accomodating Staff

Long in the tooth, the oceanfront room was outfitted and laid out much better than expected. Full size refrigerator, pull-down bed in the living area and 2 queens in a separate sleeping area. I liked the bathroom/shower separated from a changing area with separate sink and mirror.
Great balcony and this 5th floor room had a great view as well.
Perhaps the chain, but certainly this hotel offered a pre-registration option that provided for special requests. I made two and both graciously fulfilled at no charge. Very, very nice.
The down side? One elevator working though I was assured the 2nd would be fixed before my arrival. Rooms and furnishings are well used - not in bad shape, just long in the tooth. But you're at the beach!
I'd stay again and I'd certainly look for a best price option.

Thank you for your feedback Bob! We appreciate you! Come back and see us again soon!

Report response as inappropriateThank you. We appreciate your input.
This response is the subjective opinion of the management representative and not of TripAdvisor LLC
pinoydad
Dover, DE
96
Reviewed 1 October 2020
Dirty, lacking service - bring your own towels, toilet paper

Sheets were dirty. On the folding bed there was a used tissue and crumbs under the bed. Although we reserved a room for 5 (thru Expedia) the room only had 2 towels - for a suite that was advertised for a max of 6 adults. When we called the front desk, we were told that their service folks were out and that it would "take a while". We had to call again later that night and finally the additional towels came. The air conditioning was very weak. There was only a partial roll of toilet tissue in the bath, no facial tissue. There was one small window AC in the bedroom that was meant for 4 adults. I can't imagine how it would feel in the middle of summer. I could have given them lower rating if not for the great location - right on the beach, walking distance from a Dairy Queen, short drive to restaurants and attractions. Also the room layout wasn't bad. Refrigerator was large, as was microwave. 3 sinks - inside bath, outside bath and kitchen. Shame it's not better managed.

We are sorry that you did not enjoy your stay. We are working hard to correct any issues presented to us by our guests. We hope that you will come back and give us another try.

Report response as inappropriateThank you. We appreciate your input.
This response is the subjective opinion of the management representative and not of TripAdvisor LLC
Leslierae2014
1
Reviewed 30 September 2020 via mobile
Will not stay here again

I will say the majority of the staff were extremely nice! Except for one staff member named Gail. She yelled at the customers and did not want to be helpful. The room we stayed in was very DIRTY. Their was hair and soap left in the tub from previous tenants, it had not been cleaned from behind the bed, the floor was coming up and we were constantly tripping over it, lose wires were comimg out of the wall. The bottom of the tub was black from dirt.

We are sorry that you did not enjoy your stay. We are working hard to correct any issues presented to us by our guests. We hope that you will come back and give us another try.

Report response as inappropriateThank you. We appreciate your input.
This response is the subjective opinion of the management representative and not of TripAdvisor LLC
View more reviews
PreviousNext
1…456…188