US$98
US$83
View deal
MercureUS$98
Hotels.comUS$98
eDreamsUS$98
View all 17 deals
Prices are the average nightly price provided by our partners and may not include all taxes and fees. Taxes and fees that are shown are estimates only. Please see our partners for more details.
Draculas_Bride666
Rothwell, United Kingdom
367216

First of all the lady checking me in was very helpful and the room was clean and well appointed....but the hotel is being used to house Afghan refugees so the hotel is full of security guards and kids running around. I didn't feel particularly safe as a single female traveller.

Trip type: Travelled on business
See all 68 reviews
Nearby Hotels 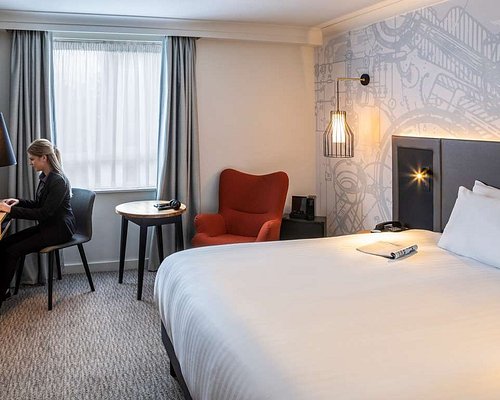 Expedia.com
View deal
Hotels.com
FindHotel
US$54
Travelocity
View all 11 deals from US$54
1 review
0.8 km from Mercure Birmingham West Hotel
We compared the lowest prices from 11 websites I stayed here for two nights for work. To say it was an unpleasant experience is an understatement. Trust every single negative review you see on here, they’re completely accurate.

The room wasn’t very clean, the whole hotel was noisy right through the night, there was no shower despite signs saying ‘keep door shut whilst showering’, I was too tall for the bath despite being 5ft5, several of my colleagues also staying at the hotel had men trying to get into their rooms at night, which made for a frightening evening.
Finally got home and a week later I’m treated to two parking fines from their hotel car park despite registering my car’s details on their parking machine.

If you don’t have any choice in the matter and you are forced to spend the night here then use this handy survival guide:
1. Film yourself using the parking machine
2. Bring ear plugs
3. Keep your door locked and chained at night
4. Ask whether you have a shower
5. Cancel your booking and go elsewhere

This review is the subjective opinion of a Tripadvisor member and not of TripAdvisor LLC.
N6263VWemilyb
Kent, United Kingdom
43
Reviewed 11 November 2021
Do not book! More like 2* hostel

The food and drinks were so expensive! I had to send my stir fry dinner back as it had penne pasta in it and no sauce or flavour, it was dry noodles and oily peppers. The starters are freezer food and the dessert was inedible. The staff were miserable and in helpful. The breakfast is awful nothing like what they advertise on the website, so not be fooled!

Down the hall way of my room people had left bags of rubbish, food and nappies which made the place smell awful!

I would never stay here again!!!

This review is the subjective opinion of a Tripadvisor member and not of TripAdvisor LLC.
Hei2005
Yorkshire, United Kingdom
6367
Reviewed 8 November 2021 via mobile
Disappointed

We booked 4 rooms (2 double and 2 single occupancy) and this seemed to be an issue upon check-in as the breakfasts hadn't been allocated to the right rooms and the man serving us didn't know how to sort it. Ultimately we said as we had the right number overall we would sort it in the morning by sharing room numbers.
I went to the restaurant and booked a table for 6 at 5pm which was taken with no problem.
One room had an issue with the TV not working which was fixed while we went down for tea. The restaurant was empty and no tables had been set up for our booking so this meant the host had to shuffle some tables around to seat us but must say the food was fine and 2 courses for £15 seemed a pretty good deal.
The room was a great size, plenty of room for a single occupant but my major downside to this was the room I was in had an adjoining door which I stupidly assumed was adjoined to someone in my party however from 11pm when I could hear the man next doors loud-speaker conversation with his wife and kids in a not-very-quiet tone I realised how wrong I was. Finally at almost 12.30am I had enough and when I tried the adjoining door found my side to be unlocked!
I'm sorry but under absolutely no circumstances was I staying in the room after finding that put so a late night trip to reception and a request to move rooms I went back, packed my stuff and moved 2 floors up. All credit to the lady on reception who dealt with me and swiftly allocated me a new room.
Breakfast was simple, as expected and no issues but the room issue put a big dampener on my stay here.

This review is the subjective opinion of a Tripadvisor member and not of TripAdvisor LLC.
Neil M
187
Reviewed 16 October 2021
Horrible expensive breakfast

Stayed here, it was ok, generally, except that I was encouraged to pay £10 for breakfast, at reception, who said that it was exceptionally good !

Breakfast was inedible, a help yourself to cheap stuff that had been precooked and kept warm for too long. eg eggs were dried and hard, bacon was covered in white stringy stuff, sausage was cheapest in uk, just breadcrumbs etc, hash browns were soggy and wet inside, bread was sliced basic stuff, everything about it said Cheap, Cheap, Cheap, I ate nothing except a few beans, which were cheap, definitely not Heinz. Abysmal.

This review is the subjective opinion of a Tripadvisor member and not of TripAdvisor LLC.
Ste L
Manchester, United Kingdom
113
Reviewed 5 October 2021
SPA is good

We booked a two-night, room only stay at the beginning of September.
On arrival we found there was a mix-up with our booking, which was not caused by the hotel themselves but was resolved by the team leader \ assistant manager after a short conversation. For the inconvenient this caused we were offered complimentary drinks at the bar.
The room was spacious and clean. The TV was a good size but there were only a few channels working due to poor signal. We booked specifically for the SPA Facility, which is good and to our fortune was only a few steps away from our room.
The hotel offers ample parking and easy access into and out of the town.

This review is the subjective opinion of a Tripadvisor member and not of TripAdvisor LLC.
View more reviews
PreviousNext
1234…
<script type='text/javascript' crossorigin='anonymous' async onerror='__scrip