US$100
View deal
Free cancellation until 17/12/21
Hotels.comUS$97
FindHotelUS$97
TravelocityUS$97
View all 16 deals
Prices are the average nightly price provided by our partners and may not include all taxes and fees. Taxes and fees that are shown are estimates only. Please see our partners for more details.
L7626YZdonnar
158

The motel is very nice. Nice size room with 2 queens, there are 2 sink areas, one in with the bath and toilet, and one just outside the bath. Towels are thick and not small. Plenty of space to put stuff. Our biggest complaint is the wi-fi. In this day and age, everything revolves around having internet access, especially if you are traveling! Also, this is a pretty good size place and they only have 1 washer and 1 dryer, only one person has access to the room at a time and it closes at 8 pm. Not much time for people who are out sightseeing all day. I will repeat, this is a nice place but they REALLY need to get the internet fixed!More 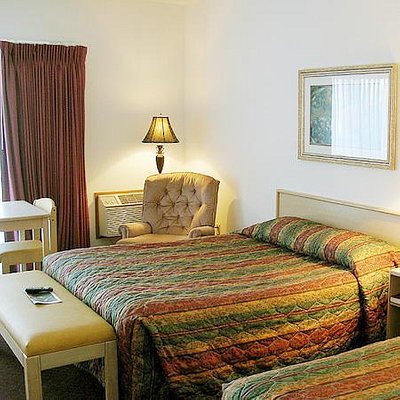 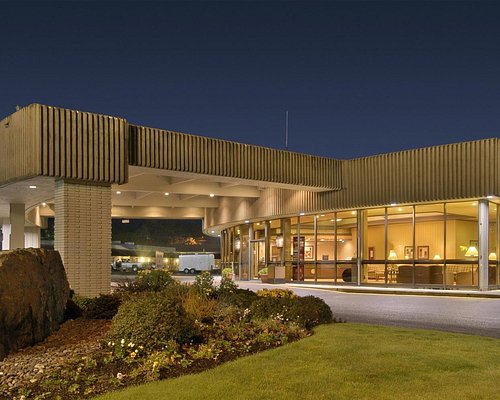 Red Lion Hotel Coos Bay
US$109
Booking.com
View deal
Free cancellation
Official Site
US$109
FindHotel
US$91
Trip.com
US$139
View all 18 deals from US$91
716 reviews
2.2 km from Edgewater Inn
We compared the lowest prices from 18 websites 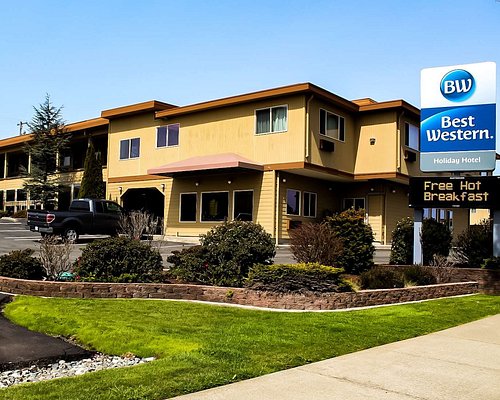 This review is the subjective opinion of a Tripadvisor member and not of TripAdvisor LLC.
Traveler66
Bellevue, Washington
4276
Reviewed 8 October 2020
Arrive well-rested since you won't be getting much sleep at this hotel

We were on a driving trip up the California, Oregon and Washington Coast and stayed the night at the Edgewater Inn in Coos Bay. It was the worst decision of the entire trip.

The hotel is extremely dated with hallways so poorly lit and institutionalized. Reminded us of a prison!

The room features are from another era. The television, tiny and mounted to the wall, was subpar. The dented, cube frig buzzed so loudly during the night that I was concerned it was going to short out and start an electrical fire. The microwave was tiny and a throwback to the 70s when the technology was new.

The bedding and furniture was well-worn. During the spread of the coronavirus, we didn't feel like it met the standards for healthy and a safe travel environment. In the bathroom, there was a single one ounce bottle of conditioning shampoo. That was it! Good thing we brought our own or we would have been out of luck!

Perhaps the most memorable part of the stay was the fact that the hotel is so poorly soundproofed that you can hear everything going on in the hotel. The guests in the room directly above ours made so much noise - jumping off the bed, running the length of the room, banging into the wall, running the shower and more. At 10 p.m., I notified the front desk asking them to intervene. The front desk could not have shown less interest in my request. The noise continued until well after 12:30 a.m. when exhaustion set in. We were awoken again at 6 a.m. with similar sounds.

While the buzzing fridge was a major annoyance, the thin floors and walls were a close second. When we prepared to depart in the morning, we were loudly reminded of breakfast restrictions and told what we couldn't have. We thanked the staff for the info and promptly left the property. That's $164 I will never get back!

Learn from our mistake and choose another hotel - or city - if you must. Avoid at all costs - literally!

Room tip: Don't stay on the ground floor unless you want to hear every movement of the people above you.
Ask Traveler66 about Edgewater Inn
2  Thank Traveler66

This review is the subjective opinion of a Tripadvisor member and not of TripAdvisor LLC.
aTallShipToSailBy
Portland, Oregon
23
Reviewed 24 September 2020 via mobile
COVID cautious travelers beware!

For the Covid cautious, beware of this place!! The low mark is for not following health guidelines during pandemic times. Decent place otherwise.

My family stayed at Edgewater for a night. There was a shield at the reception front desk. But we did not see one single staff member wearing a mask or gloves during our stay from reception to cleaning. Most surprising was a staff member who was passing out food items and pouring coffee for guests at the continental breakfast. My understanding is there are strict guidelines, especially for the hospitality business.

I asked the staff member working behind the desk if Coos Co. had different regulations and she said, "it is up to the employee if they want to wear a mask or not". The lady serving guests apparently had a medical excuse to not wear protective accessories. Still, perhaps should not have been in that service role. Wanted to share this in case others with sensitive health conditions are looking for lodging.

We had a nice experience otherwise. A funky older place, the room was clean and spacious and staff was friendly. They make reservations for the pool for one family at a time, which was nice.

This review is the subjective opinion of a Tripadvisor member and not of TripAdvisor LLC.
ShrimpAlfredo
1
Reviewed 28 July 2020
Garbage

This place freaking sucks. I went to try and get a room for my family and I and the older lady at the desk was being a a complete snatch. She made it seem like we weren’t worth her time and she is unprofessional

This review is the subjective opinion of a Tripadvisor member and not of TripAdvisor LLC.
bruysmerrill
California
5429
Reviewed 16 July 2020
Edgewater Inn Coos Bay, Oregon

Friendly, efficient staff. Spacious room with patio overlooking Coalbank Slough. Decent breakfast with a fair amount of choices. Community deck jutting out over the water where we ate our dinner one evening. The view consists largely of some of the former lumber related mills which once thrived in the area, but it all works in the context of the location. Quiet location. Near large retailers Safeway and Fred Meyer.