US$295
US$265
View deal
PricelineUS$294
Agoda.comUS$295
StayForLong
View all 7 deals
Prices are the average nightly price provided by our partners and may not include all taxes and fees. Taxes and fees that are shown are estimates only. Please see our partners for more details.
453andyb
Edinburgh, United Kingdom
7140

Just a wonderful special place.
At the end of a single track road it’s not as remote as it seems and the location is stunning
Lovely room 9 very comfortable bed and furniture and a cosy stove
The bar and living room were a great place to meet other guests who were all very friendly and chatty
The dinner was exquisite served by very friendly staff and owners who made us and our dog very welcome. Nothing too much trouble
A perfect place for a lovely break

Trip type: Travelled as a couple
See all 727 reviews
Nearby Hotels 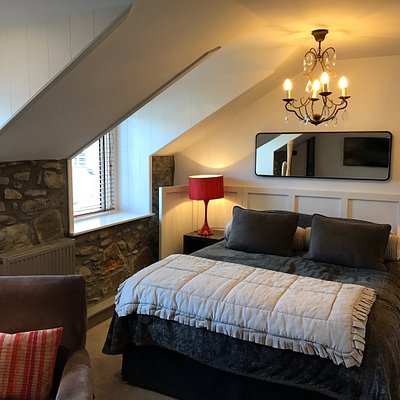 We haven’t been before and we’re gifted a night in the hotel but we’re paying for the food and anything in addition. On arrival we were slightly confused as I understood the hotel to be very upmarket and expensive, the drive to it was lovely if a little narrow, but then it opened out onto the area and with the pink container addition, the side barns, trucks and a tent on the from it looked liked a backpackers hostel. Setting first impressions aside and entering a lovely courtyard ( marred by the ladder and trailer and can left in it) entered reception. A very polite lady welcomed us but advised us unfortunately due to lack of staff the room wasn’t ready ( she also had to rush off a couple of times while trying to check in to deal with things) this was around an hour after official check in. No problem, we would go though and have the free tea and coffee provided, except when we went round to the bar area, there were no seats, you could barely fit two couples in the area. The bar man was very rude and had no idea what was going on or that we had just checked in. My husband had a beer, this was £10 for a pint. Now I know it’s remote, but still, be prepared , I was shocked! The room was nice but cold on arrival and they couldn’t tell us how to work the fire or turn on radiators, the bathroom needed grouting finishing, the windows didn’t shut properly and the tv had no reception except Netflix. All in all a little odd and definitely not worth the exorbitant prices. Dinner was a set menu and they charge around a 250%mark up on wines which again I was a bit shocked at especially when they are nothing special. Dessert is not included and is an extra. At 70 per head I would hope for three full courses( as everything is tiny proportions as per a la carte) . A full breakfast would just about feed a child. The hotel didn’t seem to have much visible eco friendly procedures in place either. All in all it was a nice gift but had we been paying for it all, I would have been massively disappointed. Not somewhere I would choose to go again.

Room tip: Check if there are events on first, take food to eat in the room and save on the dinner costs.
Trip type: Travelled as a couple
Ask F2569HNgeorgec about Monachyle Mhor
2  Thank F2569HNgeorgec

This review is the subjective opinion of a Tripadvisor member and not of TripAdvisor LLC.
Hugh_KP
Comrie, United Kingdom
1419
Reviewed 18 October 2021 via mobile
Great place - poor service

We’ve been coming here for 20 years. Last weekend was very disappointing; £550 spent on drinks, dinner, bed and breakfast for a couple for one night. For that amount of money I would expect amazing service but we had bickering staff, a creepy insulting waiter and the joy of a 10k run (which we were not informed about) blocking us from leaving the hotel until after lunch the next day. Toilets had runners queued 20 deep on Sunday morning so having checked out and been refused exit from the car park we couldn’t even pee. We emailed Tom and Lisa (the owners) twice to explain why we were disappointed but they didn’t even credit us with a reply. Adieu, Monachyle Mhor. We’ll save our next £550 single night stay for someone who cares.

This review is the subjective opinion of a Tripadvisor member and not of TripAdvisor LLC.
ScotinLondon1
London, United Kingdom
9439
Reviewed 10 October 2021 via mobile
The best hotel and restaurant

A stunning and beautiful location with a hotel and restaurant to match!
The food was excellent; staff wonderfully helpful; bedroom really comfortable; location is truly memorable.
This is one of the best hotels that we know - a must place to visit on any visit to Scotland!

This review is the subjective opinion of a Tripadvisor member and not of TripAdvisor LLC.
gill50p
Belfast, United Kingdom
12
Reviewed 8 October 2021 via mobile
Highland Escape

This review is the subjective opinion of a Tripadvisor member and not of TripAdvisor LLC.
buckersdude
Glasgow, United Kingdom
3865
Reviewed 21 September 2021
Wrong night for food!

Took some friends here to celebrate their birthday as we had heard very good things about the restaurant in particular. Our friends room was in the main house and very small. We had a room that is suitable for wheelchairs as I have a mobility issue. Very good bathroom and plenty of space but not what you would call a luxury room. At dinner you get 3 choices on each course which is limiting and the monkfish I had was very rubbery. Cooking is clearly of a high standard but the choices on the night were not very interesting, perhaps another evening would be more successful. Breakfast however was excellent Staff were mixed, reception very good, waiting staff less so. Certainly a different kind of hotel but long way to travel for an ordinary meal.