US$186
US$179
Free cancellation until 29/01/22
View deal
Hotels.comUS$179
FindHotelUS$179
Trip.comUS$186
Orbitz.comUS$179
CheapTicketsUS$179
TravelocityUS$179
View all 19 deals
Prices are the average nightly price provided by our partners and may not include all taxes and fees. Taxes and fees that are shown are estimates only. Please see our partners for more details.
A8880QZashleyh
66

We stayed here recently for a few days while attending a Red Sox Game. This was our first time staying here and it did not disappoint! The location is great- a few minutes walk to Fenway Park and some great restaurants, sores and brewery. The staff was great and they were more than willing to assist with any request we had.. The suite itself was clean, larger than expected and had a great view of Commonwealth Ave and the Citgo sign. The green line t station is next door and very convenient. I highly recommend and don’t let some recent negative reviews lead you to stay elsewhere. Yes they charge a daily resort fee, but there are some great items included (water and snacks daily). We will be back next year when we attend another game or want a weekend away.More

Thank you for choosing Hotel Commonwealth for your visit to Boston. We are happy to hear that you enjoyed so many aspects of your stay. We certainly appreciate you taking the time to share your review. We look forward to wleoming you back again next year.

Report response as inappropriateThank you. We appreciate your input.
This response is the subjective opinion of the management representative and not of TripAdvisor LLC
See all 5,240 reviews
Nearby Hotels 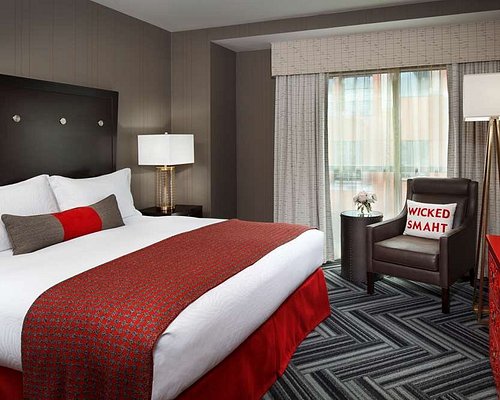 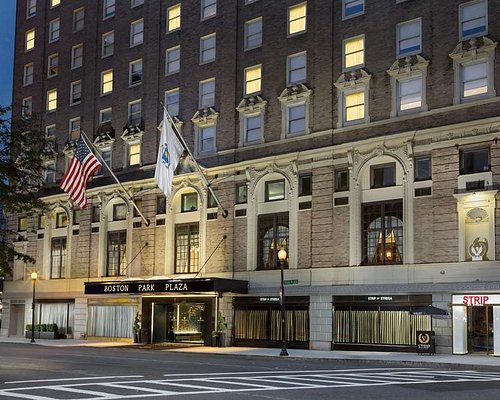 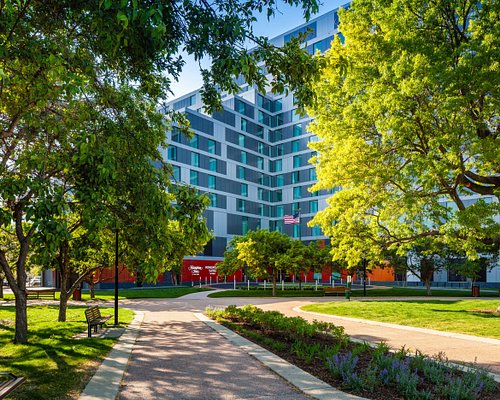 Breakfast included
Hampton Inn Boston Seaport District
US$154
US$146
Booking.com
View deal
Expedia.com
US$146
Hampton
US$146
Destinia.com
US$154
View all 17 deals from US$146
91 reviews
4.8 km from Hotel Commonwealth

Taking safety measures
We compared the lowest prices from 17 websites
Breakfast included
Hyatt Place Boston/Seaport District
US$185
US$144
Booking.com
View deal
Reserve now, pay at stay
Hyatt.com
US$155
Expedia.com
US$144
Trip.com
US$185
View all 16 deals from US$144
209 reviews
4.8 km from Hotel Commonwealth

Taking safety measures
We compared the lowest prices from 21 websites
The Westin Boston Seaport District
US$179
Booking.com
View deal
Free cancellation
Reserve now, pay at stay
Westin.com
US$179
FindHotel
US$161
Trip.com
US$199
View all 19 deals from US$161
3,267 reviews
4.3 km from Hotel Commonwealth

Great location for Red Sox and BU move in but a tad overpriced. The restaurants are closed due to the pandemic (understandable) but there was nothing on the website letting me know when I booked. Valet parking is so outrageous we ended up returning our rental to the airport once we move our child into the dorm.

The doormen were always on their phones and the one time I asked for help calling a cab in the rain they commented that they didn’t provide that service.

While I love the location we are booked elsewhere for parents weekend in October.

Thank you for choosing Hotel Commonwealth while moving your child into Boston University. I am disappointed to see that you will be staying elsewhere when returning for parents weekend. I will certainly follow up with our door and valet team to ensure the issues you mentioned do not happen in the future. We hope you will give us another opportunity when visiting BU again.

Report response as inappropriateThank you. We appreciate your input.
This response is the subjective opinion of the management representative and not of TripAdvisor LLC
jhtgth75
Sweden
3146
Reviewed 8 August 2021
Nice hotel, close to Fenway Park

Located next to a noisy highway. So keep that in mind if you are a light sleeper.

Short walk to Newbury Street with shopping and eateries. Subway station next to the hotel.

Thank you for staying with us and for sharing your review. We do have many room types with different views and locations. We will be happy to reserve you a different room for your next stay. We hope to see you again soon.

Report response as inappropriateThank you. We appreciate your input.
This response is the subjective opinion of the management representative and not of TripAdvisor LLC
T7030FVnancyp
White Haven, Pennsylvania
3036
Reviewed 27 July 2021 via mobile
Meh!

Meh! A place to hang your hat after a night of imbibing at the game and you won’t notice that it isn’t the cleanest. Why can’t housekeeping wipe walls and door knobs! I am the person that notices that they look my kids rubbed their dirty hands all over them. And there was mold in the shower that brought me back to my days of living in military base housing! For the love of God get rid of tile in hotel bathrooms. The grout is a breeding ground for mold. Oh and my teens got quite the giggle regarding the blood stains on the sheets. Yes, this place is worn.

Thank you for your feedback about your recent stay. I wish we would have had the opportunity to correct these issues while you were here with us. I will follow up with my housekeeping team about these issues you mentioned. We hope you will give us another opportunity in the future. Please reach out to me directly and I will be happy to assist you with your reservation. I can be reached at (617) 532-5055 or at Lucas.Mulkern@hotelcommonwealth.com

Report response as inappropriateThank you. We appreciate your input.
This response is the subjective opinion of the management representative and not of TripAdvisor LLC
Sally R
Portland, Maine
1524
Reviewed 24 July 2021 via mobile
Terrible stay! bring your money elsewhere

Terrible experience last night. Booked this hotel because it was so close to Fenway. When I booked directly through the hotel website, I specified that the room was for four people. There wasn’t much available but a suite that “slept four” was available. It showed a king bed with a sofa in the room. The room description was limited but when I read that it slept four, I figured that the sofa was a pull out. When we were checking in we discovered that the room in fact did not sleep four. That the website “just says that because it’s the maximum amount we can legally put in there”. I said ok fine can you put two cots in. I was told it was not an issue. We were headed out to the game so I asked them to bring the beds while we were gone so they would be there when we returned. We were assured this was fine and the beds would be set right up. We came back at about 11:00pm and there were no cots in our room. I called down and was told that actually they can’t put two cots in our room, only one because of a fire hazard and that I needed to pay $35. I was floored but they had us in a tough spot- 11:00 pm with two tired kids what choice did we have. Well, it then took them ONE HOUR to deliver the bed. That’s right. The bed that they had hours to set up didn’t come until midnight. So we had one kid on the cot and the other one in bed with us which made for an impossible nights sleep. To top it off, when we left this morning we were told there were muffins and coffees from 7-11am. We came down at 8:30 and there was coffee but no muffins. When my husband asked where the food was he was told “when we run out we run out” which I guess is understandable but the guy said it in a very rude and dismissive manner. The valet and housekeeping staff were very nice but that was about it. Our room smelled musty, had stains on the carpets but was otherwise clean. This hotel was the biggest waste of money ($800 a night!!) I would NEVER stay here again. There are much nicer and better options in Boston, that actually deliver what they promise to their customers.

Thank you for staying with us and for sharing your feedback. I am very sorry to read about your experience with us. Please feel free to reach out to me directly in the future so we can ensure we have the best room to accommodate your family. I apologize for the situation with your rollaway and I will be sure to follow up with my team. We hope you will give us another chance in the future. i can be reached at (617) 532-5055 or at Lucas.Mulkern@hotelcommonewalht.com.

Report response as inappropriateThank you. We appreciate your input.
This response is the subjective opinion of the management representative and not of TripAdvisor LLC
NewYorkTravelor
New York
8494
Reviewed 18 July 2021 via mobile
A good option in Boston

We found the staff to be very nice and helpful and the room was large and well equipped including a couch. It had no view at all. I gave it 4 stars rather than 5 since the only restaurant was an udon noodle place and there was no where for breakfast or even lunch if you don’t want noodles. It is a 10-15 walk to restaurants on Newbury Street so the location is not ideal, although there is a subway station right across the street. We got a very good rate.

Thank you for staying with us and for sharing your review. We are hopeful the other restaurants adjacent to the hotel will open soon. We appreciate you mentioning our staff. We hope to see you again soon.