US$269
Free cancellation until 22/05/21
Reserve now, pay at stay
View deal
Booking.comUS$269
FindHotelUS$269
Hotels.comUS$269
PricelineUS$269
Expedia.comUS$269
CheapTicketsUS$269
View all 17 deals
Prices are the average nightly price provided by our partners and may not include all taxes and fees. Taxes and fees that are shown are estimates only. Please see our partners for more details.
jordonb310
1

From the minute I stepped into the hotel, both the Management staff and the rooms were more than impressive. I'm so happy that we chose this hotel to spend time at. My family and I will definitely be back!! Thank you for everything.

See all 320 reviews
Nearby Hotels 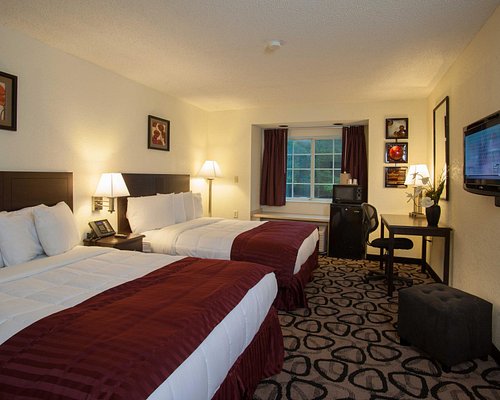 We had two rooms, checking in March 31. One, Room 358, was a suite and it had not been cleaned. Both bedspreads had visible dirt. The person who came up said "maybe the housekeepers rubbed against the bedspreads" but assured us the sheets were clean. Visible direct means that the room was not clean! Not only that, the previous guest's room key was lying on the counter in the bathroom. If that wasn't enough, the sheets in Room 355 were stained. We checked out on April 3 and three hours later discovered we had forgotten a pillow. There were distinct characteristics - it came from Down & Feather and it was covered in a pillow cover plus an Yves De Lorme pillowcase. Chuck told us to call back on Sunday. We called back on Sunday and were told to call back on Monday. Now it is Wednesday and we have yet to find out whether the pillow was found. Had Chuck (or someone) walked to the room on Saturday, we would have this. Chuck is consistently rude. I always dread seeing him at the front desk. Dirty rooms and now they refuse to return our belonging? That's just too much. The only good thing about this hotel is it is across the street from the clinic and it is convenient, but don't expect cleanliness nor honesty.

I am very sorry for the issues that you had with the room cleanliness. I can assure you that we take cleanliness very serious and we do not normally have issues like this. I can see that you have stayed with us many times in the past and I am sure you have continued to stay with us because you have not had issues like this. I will share your comments with the housekeeper and supervisor so that they can learn from this issue and double check the top sheet in the room. I see that someone spoke to one of the desk clerks yesterday and the pillow is being shipped out today. I am sorry it took three phone calls for this to happen. I will review this with our front desk because you should not have had to call back that many times for us to send the pillow back to you. Again, I am very sorry that you had these issues. I appreciate you taking the time to review the hotel. I hope that you will continue to stay with us in the future.

Report response as inappropriateThank you. We appreciate your input.
This response is the subjective opinion of the management representative and not of TripAdvisor LLC
Nsrt67
51
Reviewed 14 February 2021
Not impressed!

The only good thing about the hotel is location. There was trash piled high near the elevator. Rooms okay and beds uncomfortable. Could hear elevator all night. Over priced hotel which is mediocre at best. Only one person to check in guests and she seem flustered. Will not recommend or stay again.

I am very sorry that you did not enjoy your stay at the Courtyard Mayo Clinic. We pride ourselves on delivering amazing service within a great hotel. Based on your feedback we did not deliver that to you. I appreciate you bringing these issues to my attention and I am going to personally look into the issues and correct the situation so that another guest does not have the same experience. I hope that if you are coming back to Mayo Clinic again you will give us another try so we can show you what great service and facilities we provide our guests.

Report response as inappropriateThank you. We appreciate your input.
This response is the subjective opinion of the management representative and not of TripAdvisor LLC
DavidFraiberg
Jupiter, Florida
197
Reviewed 12 January 2021
Multiple Problems. Look Elsewhere.

This hotel continues to have multiple problems, even after the renovation. The Manager, David, admitted as such in a follow-up phone call. The worst was the fact that I found a former guests dried blood on the quilt blanket which is unacceptable at any time but all the more so during a pandemic and when I was staying there during a surgery at Mayo. The walls are too thin (which the Manager said the ownership group knows about but are struggling to fix given the age of the building) so you can easily hear hallway and adjoining room conversation. The rooms are poorly insulated so you really feel the cold come in and the thermostat sensor is awful so room temperatures swung from too hot to too cold. Also, the rooms are overly small. I highly recommend both the Hampton Inn and Homestead Inn on Beach Boulevard as winning replacements. This hotel's single saving grace is its incredible location right on the Mayo campus. I suspect the owners know this so they don't make much of an effort to make it truly competitive. Ultimately, they refunded two of my three night stay so I am grateful for that but it's still ridiculous to find dried blood from a former guest on the quilt blanket. It's worth noting that we were so concerned about health and sanitation that we even brought our own pillow cases and sheets, and paid of an extra night so the room would free of former guests for at least 24 hours prior to our arrival given Covid; we also asked them to have the room sprayed in advance which they said they did so this is an option but one you have to know to ask for as it's not something they mentioned without my bringing it up.

I am very sorry that we did not exceed your expectations during your stay. I can assure you this is not something that normally happens at the hotel. We take the cleanliness of the hotel very serious. Our housekeeping supervisor was in the room you were going to be placed in the day before, sanitizing the room and using the fogger as we discussed prior to your arrival. When you reported the "dried blood" on the blanket it was quite surprising because of the amount of time the supervisor spent treating the room for you. I wish you had seen this when you were making the beds with your own sheets so we could have addressed it before you spent the two nights sleeping in the bed. I have shared your comments with the housekeeping supervisor and housekeeper so they can increase their focus and prevent this from happening again.

The noise issue that I was discussing with you was related to the connecting doors in some of the rooms. The owners and Marriott are aware and we have been trying different solutions to this issue. Unfortunately, we have not found a perfect solution yet. But we will keep trying. I am sorry about the other issues that you had but this is the first I have heard about the thermostat and wall allowing cold air to pass through them. I have our engineering team looking at the room so we can address these issues.

I appreciate you taking the time to complete the review online. I am sorry that you are not going to stay with us again.

Report response as inappropriateThank you. We appreciate your input.
This response is the subjective opinion of the management representative and not of TripAdvisor LLC
Iralgo
Sevierville, Tennessee
1127304
Reviewed 8 January 2021 via mobile
Convient to Mayo Clinic

On the grounds of Mayo Clinic in Jacksonville Florida. Only room service every three days due to the covid-19 virus. Hotel is clean and on large wooded grounds. Shuttle service to and from Mayo. Two electric charging stations for battery cars. Recommend for your visit to Mayo. Rating... good.

This review is the subjective opinion of a TripAdvisor member and not of TripAdvisor LLC
BB1938
Miami, Florida
231106
Reviewed 26 October 2020
Under renovation but still a very good option for Mayo visits

We had not visited Jacksonville and Mayo since 2018, and came this year and stayed in this very comfortable hotel right next to Mayo. It is now under renovation, the restaurant is not open for business but they will deliver room service which was very good as we did not have to leave the room. The food was good. There is no cleaning service but they will bring additional towels if requested. They have improved the rooms in that now there is a magnifying mirror to put makeup for the ladies. However I am still surprised a hotel which has so many people coming for their tests at Mayo does not have a safe in the room to leave valuables and passports etc. I hope at some time they do put this as nowadays all hotels have safes in the rooms. Otherwise, it was a nice stay, as usual.