US$139
US$97
View deal
SAVE US$42
Free cancellation until 27/04/21
Expedia.comUS$111
travelup.comUS$137
getaroom.comUS$139
View all 19 deals
Prices are the average nightly price provided by our partners and may not include all taxes and fees. Taxes and fees that are shown are estimates only. Please see our partners for more details.
alexlD4315QQ
Miami, Florida
4

Checked in and headed to the room, but the elevator door closed once inside and wouldn't move. Banged on the door and someone said “you need to press the bottom several times for it to work”
Get to the room and was very cold and thermostat wouldn't work. Phone on the night stand doesn't work, so I had to use my cell to reach the desk. ”judt play with until it works”. Couldn't sleep because it was too cold.
On the same call, I told the clerk I needed a wakeup call and room phone didn't work, to which he said “I'll take care of it, but didn't”
Called again using my phone to address the wakeup call issue and was told someone would come knock on the door. That never happened. Told the girl at the desk about the problems and no wake up call and she looked at me like I spoke chinese.
Requested a copy of my bill and she said the computer was “thinking” and I was running late. Ask for a card from the hotel and she said they don't have cards.
PRETTY HOTEL BUT HORRIBLE SERVICE.
STAY THE HELL AWAYMore

First of all, I want to apologize again for the challenges you encountered on your recent stay. As we discussed on the phone yesterday, this is not the standards that we strive for and I will ensure corrective measures are taken. Your feedback is appreciated and I have share with our team. Please contact me when your returning for the one night. You have my information and please do not hesitate to reach out to me directly.

All the Best,
AThompson

Report response as inappropriateThank you. We appreciate your input.
This response is the subjective opinion of the management representative and not of TripAdvisor LLC
See all 6 reviews
Nearby Hotels 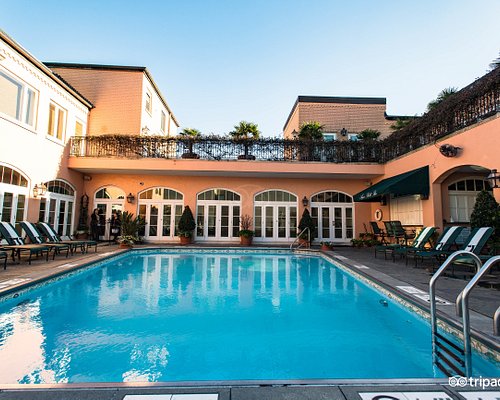 Preferred Hotels
View deal
Free cancellation
Expedia.com
US$189
Trip.com
US$149
Lol.travel
US$202
View all 16 deals from US$149
9,925 reviews
0.7 km from Hotel Vinache
We compared the lowest prices from 16 websites The staff at this hotel was great!! They really helped make me feel comfortable. Also great location outside of the French Quarter close but far from the noise. Looking forward to going back in the spring

We appreciate you taking time to post about your experience at Hotel Vinache. You are always welcome and we look forward to your next visit.

Report response as inappropriateThank you. We appreciate your input.
This response is the subjective opinion of the management representative and not of TripAdvisor LLC
ivethq2016
Garland, Texas
1922
Reviewed 12 October 2020
FUNKY moldy smell

Stayed for 2 nights, room was nice but the smell was god awful. Smelled of mildew mold or something, any time you would leave the room and come back it would hit you hard! Bathroom was gross, had to shower in a friends room instead. Staff could of been nicer but overall you pay for what you get.

Thank you for sharing feedback about your stay. I want to apologize for the challenges you encountered during your visit in October. I will share the feedback with our service team and housekeeping team to ensure corrective measures are taken.

We would welcome an opportunity to welcome you back. Feel free to contact me when you plans bring you to New Orleans.

Report response as inappropriateThank you. We appreciate your input.
This response is the subjective opinion of the management representative and not of TripAdvisor LLC
coolnana2015
Laurel, Mississippi
710
Reviewed 26 September 2020 via mobile
WONDERFUL

You are always nervous when booking a new hotel, this one is a keeper.
Very nice, clean hotel. Staff was friendly and helpful. My only complaint is no ice machine. We would definitely stay here again if I have to go back to the doctor.


Thank you for taking to post about your recent experience. We strive for 5 traveler ratings and I am excited that your visit was a 5. It was great to hear you enjoyed your first stay at our hotel. For future visits, we have ice machines on certain floors and our Front Desk can also provide ice upon request also.

We look forward to your return!!

Report response as inappropriateThank you. We appreciate your input.
This response is the subjective opinion of the management representative and not of TripAdvisor LLC
PreviousNext
12