Stay somewhere else - Review of The Stanley Hotel

The Stanley Hotel
Book now! This hotel is likely to sell out soon.
Lock in the lowest price from these sites

US$319
View deal
TripadvisorUS$319
Expedia.com
Travelocity
Orbitz.com
eDreams
travelup.com
View all 12 deals
Prices are the average nightly price provided by our partners and may not include all taxes and fees. Taxes and fees that are shown are estimates only. Please see our partners for more details.
_JB2SanDiego_
San Diego, CA
3817

Review of The Stanley Hotel
Reviewed 2 weeks ago

We stayed in the Lodge. Room was very hot. No AC. They have small AC portable unit that blows air about 75 degrees from front, and extremely hot air out of the back, because it is not vented to outside. Could sleep at all. Tried to change rooms. The new room had same issue, so didn’t move. The overhead fan had switch for high or low, but you couldn’t change it to what you wanted. Stuck on low!
Room and bathroom are very small. Also, have to lug your suitcases up stairs to lobby. No ramp, no cart, no help!

Even though they are completely sold out, there is no restaurant open for breakfast. Said they don’t have staff. There is a little coffee shop with minimal choices that they ran out of by 10:00, so plan on getting in your car and driving to breakfast.

Dinner at Cascades was excellent. I had parpadelle bolognese, husband had meatloaf. Both were outstanding.

I went on 2 tours. The evening ghost tour, which was pretty lame, and the hotel tour which was quite interesting.

All in all, this was a very disappointing experience.More 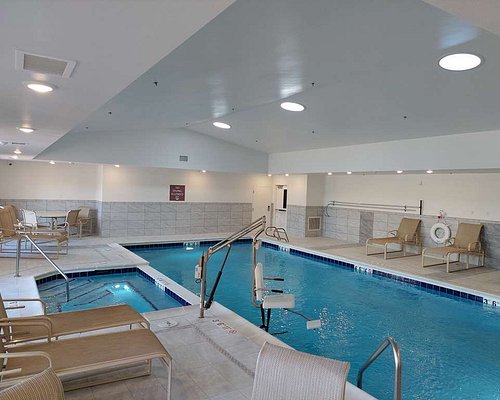 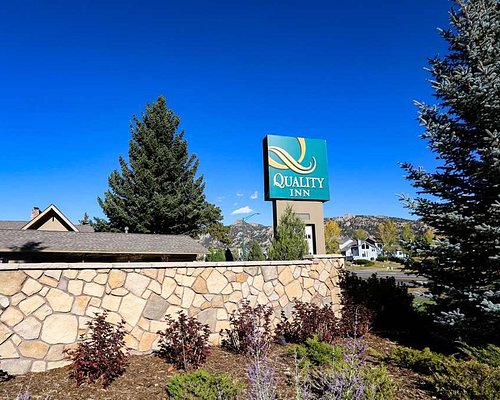 Top Rated
Breakfast included
Quality Inn Estes Park
US$330
Booking.com
View deal
Free cancellation
Expedia.com
US$330
Priceline
US$330
Quality
US$330
View all 16 deals from US$329
1,317 reviews
1.7 km from The Stanley Hotel
We compared the lowest prices from 16 websites 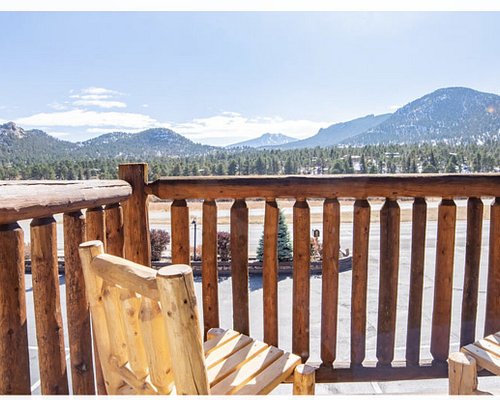 Alpine Trail Ridge Inn
US$215
Booking.com
View deal
Expedia.com
US$215
Priceline
US$215
Hotels.com
US$215
View all 11 deals from US$215
1,312 reviews
3.1 km from The Stanley Hotel
We compared the lowest prices from 11 websites
Breakfast included
Best Western Plus Silver Saddle Inn
US$253
US$220

Taking safety measures
We compared the lowest prices from 16 websites
18% less than usual
Coyote Mountain Lodge
US$224
US$183
Booking.com
View deal
Expedia.com
US$224
Priceline
US$224
FindHotel
US$224
View all 11 deals from US$183
657 reviews
1.6 km from The Stanley Hotel

Booked a room at the Lodge and wound up in the original Stanley. There are not enough characters to allow me to describe the disappointment. Due to a wedding that was being held there, is the reason we didn't leave after the 1st night. I can't believe I'm hearing people say that they were delivered a portable a/c unit, when we couldn't even get a fan, after complaining about the heat. We knew the hotel did not have a/c, but had no idea that the sun beating into our room would heat up that quickly, even with the drapes closed. Historic, yes...OLD and mismatched furniture, yes. No full length mirror. Only small one over the sink in a very small bathroom. I've been in historic hotels before, in Boston, NYC, etc....and they've kept up with the times still keeping the old charm. Each day there, we asked for a fan and/or a mirror. Picture 2 women trying to get ready to attend a formal wedding. The front desk staff that we encountered were not friendly, curt and never smiled. Absolutely no Customer Service. The constant tours up the grand staircase and onto our 2nd floor room were troublesome and annoying. A crowd of at least 15-20 people to try and get thru in order to get to our room. Folks are allowed at all hours to roam the main floor and even though there was a sign on the landing of the staircase that said "Guests Only", that didn't seem to stop folks. The doors leading to the halls for guests were often left open. When closed, you had to have a key, but during the day and into the evenings, they were always open. I stated our dissatisfaction again on the night before checkout, going over everything we had dealt with and only on that 3rd night, did they miraculously find a fan for us. I asked about some type of compensation and was told they were only authorized to take off $100. For 3 nights, our total was over $900. REALLY???? Then come to find out recently going over my cc statement, they charged me another $100. Sent an email to the Hotel directly and they did not address it at all. Obviously I've disputed that charge with my cc company. There are SO many other places to stay in Estes Park. Quaint cottages, smaller properties, etc.... So save your money and DO NOT STAY at the Stanley. You can always take a ghost tour, but try and stay out of the way of the poor souls trying to get to their overpriced rooms. BTW, the temperature on my travel alarm showed 78 degrees at 10:13p our last night there.

This review is the subjective opinion of a TripAdvisor member and not of TripAdvisor LLC
lionessa13
Atlanta, Georgia
87
Reviewed 3 weeks ago
Absolutely Beautiful!

We had looked forward to visiting The Stanley Hotel for some time. It did not disappoint. The staff was amazing, friendly, and helpful. The buildings are elegant, and the gardens are lovely. We hope to return soon! Perfect getaway for those who appreciate classic perfection.

This review is the subjective opinion of a TripAdvisor member and not of TripAdvisor LLC
BAPsGirl
Houston, Texas
1
Reviewed 3 weeks ago via mobile
Overpriced tourist trap

I don't usually write reviews bit this place was so disappointing for the money spent. My list of complaints:

1. No phones in the room. I could let this one go except that cell phone service is spotty.
2. If you do have a complaint about your room, it's a gamble if anyone actually addresses it.
3. Jacuzzi in bathrooms don't work. Hotel maintennance informed us that no room had a working jacuzzi.
4. Pool closed during the summer.
5. No room service.
6. No bell service.
7. No breakfast (except coffee shop).
8. One restaurant that is so busy that you need to make reservations when you book your room. Refer to #4.
9. Non guest tourists everywhere despite claims for covid safety.
10. The room's carpet and furniture need to be updated.

This is the classical tourist trap. I advise that you lodge elsewhere and take the tours if you are into the supernatural.

I was a little concerned after reading the reviews, but this place blew me away! Yes we had air conditioning. The room was very clean, neat and tidy. The view was amazing! We even saw an elk laying in the front yard. We stayed in a haunted room in the 4th floor. No activity but the room was awesome! Large and spacious. Nice sitting area. The Red Rum Punch was fun. The elk, bison, pork meatloaf was incredible! Yeah it was a bit pricey but the value was definitely there. The staff was friendly and knowledgeable. A beautiful old hotel restored to great beauty.