Touring park. Most pitches are sloping so some levelling to be done. Quite close together so a bit difficult to maintain safety distances. Electric, water and waste on the pitches.

Very nice club room area with a large patio with great views over the Bristol Channel and a stone beach below.. Lovely walks along the coast path and easy walking to the train station and bus stops. Frequent transport to Cardiff, Barry and Bridgend.

Got a bit packed at the weekend but that is to be expected.

Two or three restaurants on the site as well as a pool and fitness building.

Would definitely stay again but would want a larger and more level pitch than we had.More 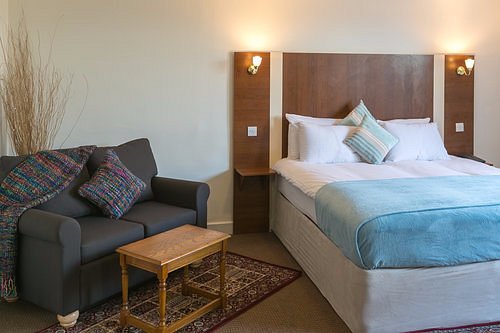 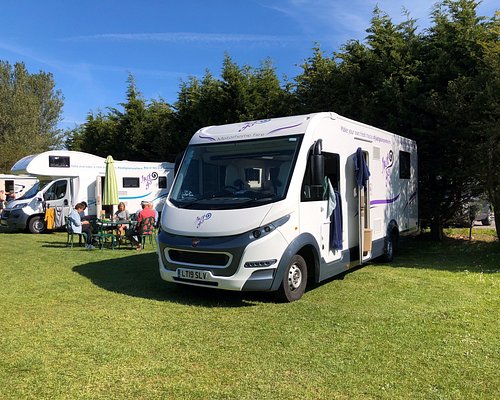 Hotels.com
View deal
Travelocity
Booking.com
US$62
Expedia.com
US$65
View all 17 deals from US$62
134 reviews
3.6 km from Fontygary Leisure Park

Expedia.com
View deal
Free cancellation
Pay up to 12X
Tripadvisor
US$191
eDreams
Booking.com
US$209
View all 15 deals from US$191
1,019 reviews
10.4 km from Fontygary Leisure Park
We compared the lowest prices from 15 websites
Vale Resort

We booked into a "superpitch" with our moho for a couple of nights, as we were looking to stay reasonably close to Barry. The site looked OK and "superpitch" reassured us that for the money it would be OK.

The site is reasonably close to Barry. It also has easy access to walking along the coast path directly from the site. There is a reasonably good pub over the road, a fish & chip shop on the site boundary and a small shingle beach directly accessible from the site. We did not use the facilities but did eat lunch in the restaurant. We noticed the meagre and dirty toilet and shower facilities but it was quiet and we had on board facilities we could use. We arrived on Thursday in September, all was well....

Friday, now this is a differnt matter. Thursday the site was quiet, pitches were very very close together but not very busy. Friday afternoon suddenly there was a huge influx of tourers, caravans and everything inbetween, relentless arrivals which went on far into the night. Each one came with a large contingent of free range children and dogs. The pitches were so close together that once chairs tables and endless alcohol were unloaded you literally could not walk inbetween. You could also hear the conversations in the vans now positioned each side, the pitches were that close. It was obvious many groups knew each other well, so perhaps it was just the fact that it was impossible to walk between vans that they insisted on shouting loudly to each other across rows. The arrivals went on and on, engines revving, shouting and swearing. The only respite was that most people made their way to bar Friday evening (leaving the free range children to roam free range). However on return at 11 pm many groups continued to party outside, drinking, shouting and swearing until the small hours.

It was at about 1 am Saturday morning we gave up on sleep and decided to escape at 7 am that morning. Noticing the state of the loos at that time (doors open, nappies on the floor, loo roll everywhere) we knew we had made the right decision.

Like other reviewers have noted, we are convinced that having pitches so close together you can touch the van next door could even be a fire hazard. We also note from other reviewers here and elsewhere that this weekend influx is a regular occurence.

In summary, if you are in a large group, like partying and want somewhere to stay , dont mind shouting and swearing until the early hours, dont mind kids under your van or treading in dog poo as you step out, are interested in the voyeurist aspect of being so close to the vans each side that you can hear every word, then this is probably the site for you.

If you are looking for a site in this location consider perhaps a mid week stay when the children are back to school.

This review is the subjective opinion of a Tripadvisor member and not of TripAdvisor LLC.
AARONHEWLETT
6
Reviewed 3 September 2021
NO LIFEGUARDS

On a family holiday and can't take kids swimming due to no lifeguards ( shocking for a family holiday park ... when asking the staff and the reply is do it online.... we have been here loads of times and I think its time to look else where

This review is the subjective opinion of a Tripadvisor member and not of TripAdvisor LLC.
J2491XTsandrab
2
Reviewed 29 August 2021
Looked great on their website

Been here for a week in our motorhome. Booked early so got a good pitch. All sounded great first few days were good. Nothing organised during the week for the kids entertainment wise. First day chefs wanted a day off so kitchen was closed. Friday of bank holiday chefs were off sick so kitchen was closed. Loads of tpurers came on the friday night never been anywhere where vans have been on top of each other. I could pass a coffee out our window to the next campers. I thought there was a legal requirement for a fire break.
Also this site is open to any public to use no security so bank holiday Saturday everybody from wherever was using bar resturant it was.mental. we went for a couple of hours left about 7 and people were queing to get in.
Not what it said on the website unfortunately
One more thing. There's a pub opposite and a wild campsite both with no facilities but they were all using the site shower block and as there are onlyv3 showers it was a bit blocked.
Sorry rant over

This review is the subjective opinion of a Tripadvisor member and not of TripAdvisor LLC.
U2974CCwendyw
91
Reviewed 21 August 2021 via mobile
Great pitch!

Luckily when I booked to stay here I chose, on the map, what looked like the biggest pitch - No. 1 - it was HUGE! But felt sorry for all the others - cramped.
Lovely site, right next to the beach, pub and shop.
I LOVE the shower/toilet setup.

This review is the subjective opinion of a Tripadvisor member and not of TripAdvisor LLC.
Chrismort123
Barry, United Kingdom
41
Reviewed 18 August 2021 via mobile
Dissapointing site

We stayed in our touring caravan for the second time over sold under marshalled dirty unsafe for children to play it was like a holding pen for travellers. Very dissapointed and glad to leave .
Queing for toilets and showers dirty smelly poor cleaner couldn’t keep up .
Much better sites out there ..

This review is the subjective opinion of a Tripadvisor member and not of TripAdvisor LLC.
View more reviews
PreviousNext
123…
<script type='text/javascript' crossorigin='anonymous' async onerro