US$125
View deal
Expedia.comUS$125
eDreamsUS$125
Orbitz.comUS$125
Agoda.comUS$125
TravelocityUS$125
CheapTicketsUS$125
View all 14 deals
Prices are the average nightly price provided by our partners and may not include all taxes and fees. Taxes and fees that are shown are estimates only. Please see our partners for more details.
353sabrinah
Denver, Colorado
1

This hotel is still recovering from Hurricane Maria but they are doing a marvelous job! Our room overlooked the ocean, had a balcony with table and chairs. Room was clean, cool and quite comfortable. Bathroom was huge with a gorgeous shower. Most of all, the owner was kind, gracious & emminently helpful!

Trip type: Travelled as a couple
See all 145 reviews
Nearby Hotels 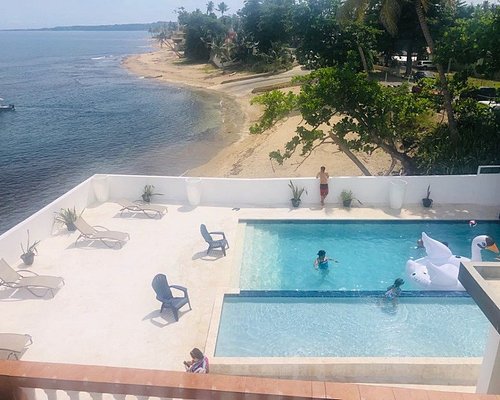 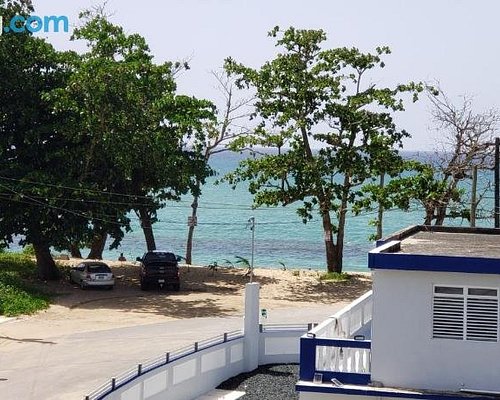 We arrived around 5 am. We hauled the luggage to the second floor walking up the stairs, just to find a smelly room (roach spray), 2 blue towels (for 4 people) that had bleach stains all over, air conditioner only in one room of the "suite", no television, no Wi-Fi, no hangers in the closet, old food in one of the drawers, dirty windows. Old mattresses, sofas, debris all over the property in the hallways. Needless to say, mold and mildew. We literally just rested a few hours and left. We decided that it was not a place where we wanted to stay. We got charged for 2 days. We saw the reviews, but we did take into consideration that the reviews were prior to the hurricane in September 2017.

This review is the subjective opinion of a Tripadvisor member and not of TripAdvisor LLC.
Charles H
California
13
Reviewed 24 July 2017 via mobile
Awful!

If a zero or negative number were possible, I'd surely NOT rate them with a one. The rooms are 100% tile, you're given one towel & one small bar of soap each. That's it. The bathroom doesn't have a mirror & there's a single, low end, door knob lock securing your door. The tile looks new (aka remodeled) but there's nothing nice about the rooms. There's a tiled bath tub on The balcony, but it's not a jacuzzi. Also, there are no walls for privacy between your tub and the neighbors tub. For that matter, the neighbor could use your tub because there are no walls at all on the 'private' balconies.

The included Breakfast isn't at all what you'd expect. First off, breakfast is set for 8:30, but doesn't actually start until 9am. And, breakfast consists of Folgers drip coffee in a styrofoam cup and half of an egg sandwich. Sandwich equaled: bread, thin egg, American processed cheese,and a think slice of grocery store lunchmeat. MCDONALDS does better than this. And, the resident owner/manager was more focused on reading her Facebook on her cell phone than attending to guests.

Other than location, there isn't anything nice about this place. Spend your money elsewhere & enjoy the surroundings. Try the Crash Boat Beach area for nicer hotels & beaches.

If you're a solo guy coming down to fish & drink, then this place might suffice. BUT, don't bring your significant other & kids to this AWFUL hotel.

This review is the subjective opinion of a Tripadvisor member and not of TripAdvisor LLC.
Mirtha L
22
Reviewed 22 July 2017 via mobile
LOVED IT

I was there for the second time on June 2017 with my 20 yr old granddaughter for eight days.The room was quite spacious, clean and quiet. We loved the food from their restaurant and the great service from the staff. The owner, Freddy is very accommodating and friendly to say the least. We loved the attention and service we received from him.
I specially loved waking up to the ocean sound every morning as well as the view from our balcony. If you are looking to experience the beach, 5 minutes away, in a very quiet peaceful hotel with great food and great service this is the place to stay. I will be staying there every time I go visit my family.

This review is the subjective opinion of a Tripadvisor member and not of TripAdvisor LLC.
jose c
Aguada, Puerto Rico
13
Reviewed 9 May 2017
vacation

Beautiful place to spend youre vacation. The food is excellent and the view is incredible. The rooms are remodeled and very clean, enough towels. The owner Freddie very nice guy and very polite including his staff...Cant wait for next year to go back. Had an awesome time. See you next year Freddie Thanks for making this staying a memorable one.

Room tip: The best rooms to get are the ocean view or the ones with jacuzzi
Ask jose c about Hotel Colombus
3  Thank jose c

This review is the subjective opinion of a Tripadvisor member and not of TripAdvisor LLC.
nvalle
Puerto Rico
2
Reviewed 27 March 2017 via mobile
Work visit

Very good experience. The view and the sound of the sea was relaxing. The food was very good one of the best "mofongo" with soup I've ever tried. The room was clean, almost everything was new they are still remodeling and had free wifi. The owners make you feel at home.

This review is the subjective opinion of a Tripadvisor member and not of TripAdvisor LLC.
View more reviews
PreviousNext
123…
<script type='text/javascript' crossorigin='an