Although it's true that gelato (ice cream) is sold pretty much everywhere in Rome, there's gelato and then there's gelato. A movement toward artisanal gelato has revitalised the local scene, and Italy now certifies select shops as gelaterie artigianali. These establishments use only fresh ingredients and no artificial colours, flavours or thickeners. Note that you'll see lots of places, particularly in the touristy historical centre, using the word "artigianale" as a marketing ploy without being certified at all.

It's very much worth the effort to seek out great gelato. This list isn't exhaustive but attempts to include many gelaterie Romans agree are tops, whether they be artigianale or just generally excellent. If you're uncertain, more clues a gelateria is superior include stickers or certificates displayed from the Gambero Rosso - Italy's revered food guide - and/or other food-rating publications.

Gelaterie offer ice cream in both cones and cups of different sizes. Order politely by saying something like: "Vorrei una coppetta da tre euro, per favore" ("I'd like a three-euro cup, please"). The great news is you can then usually pick three different flavours - tell the server your first choice, then listen to hear him/her ask: "Poi?" ("Next?") or: "Altro?" for the next flavour. At the end you will usually be asked: "Con panna?" or simply: "Panna?" ("Whipped cream?"). 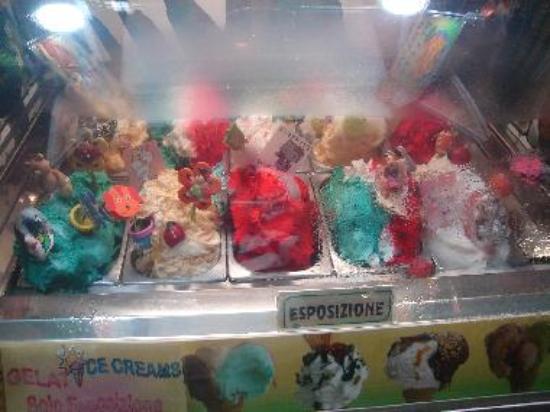 red at gelaterie include sorbetto (sorbet), granita (flavoured shaved ice, wonderfully refreshing in the hot, humid Roman summer), and granita di caffè (coffee-flavoured shaved ice, layered into a cup with plenty of whipped cream). In winter you may also find cioccolato caldo (hot chocolate almost as rich as the French version). Be aware that some gelaterie close for the winter during January while others may close for the August holidays.

Romans (and Italians) are very discerning when it comes to gelato. New gelaterie come on the scene regularly, and the current trend is for creative new flavour combinations you'll be hard-pressed to find anywhere else.

Fatamorgana -  Via Laurina, 10, off the Via del Corso, between the Spanish Steps and Piazza del Popolo. A branch of the excellent artisan gelato chain with interesting tastes and textures in flavors like pear with gorgonzola cheese and halva.

Ci gusta! - Via della Palombella, 32, just two-steps away from the Pantheon. For people who love the real Italian artisanal gelato, ice drinks, smoothies, swirly, fruit salads and the delicious sweet burger: you must come here! Ci gusta! This will also be the occasion to revitalise your soul and senses offering you the best frozen yogurt in city garnished with fresh seasonal fruits or delicious dessert sauces. What are you waiting for? Ci gusta! is waiting for you!

Gelateria del Teatro - Via di San Simone, 70, just off the pedestrianised via dei Coronari, between piazza Navona and the lungotevere Marzio. This new-ish place is a gelateria artigianale, using carefully sourced ingredients including almonds from Bari and pistachios from Sicily. The picturesque antiques-district location offers outdoor seating in a tiny alley; the gelato itself is heavenly and includes several flavours of chocolate ranging from "al latte" (milk) to "puro" - reputedly 70% chocolate. Other choices include cassata and tiramisù flavours plus caramel-pear and ricotta-fig-almond.

Alberto Pica - Via della Seggiola, 12, near the Ghetto. Not far from largo di Torre Argentina and Campo de' Fiori. Mr. Pica happens to be the president of the Associazione Italiana Gelatieri, the body which certifies gelaterie as "artigianale," but the best reasons to visit are in the glass display case of this small, old-school gelateria: the fruit flavours here (particularly the apricot and wild strawberry) are wonderful. The riso (rice) gelati are also reliable. Just outside, a shady, leafy sitting area offers table service (surcharge applies); generous sundaes, served with whipped cream, arrive in footed metal dishes.

San Crispino - Via della Panetteria, 42, very close to the Trevi Fountain. Opens at 11 AM. A rave review ten years ago in the New York Times raised this gelateria's profile and it remains wildly popular with tourists; there are often lines out the door. Inside, the gelati are stored in stainless steel bins with lids - they take ice cream very seriously here and won't serve it to you in a cone, claiming the taste of the cone interferes with that of the gelato. In general, flavours are creamier and more ice-cream like than some gelati; the signature flavour is crema with honey. Servings are small and there is a 2 euro surcharge to sit at the tables in the back.

Della Palma - Via della Maddalena, 20/23; near the Pantheon. The Baskin Robbins of Rome, with countless flavours and varieties (lots of soy choices, frozen yogurt, etc.).

Fassi -  Via Principe Eugenio, 65, off piazza Vittorio Emanuele II. Fassi (a.k.a. "Il Palazzo del Freddo") first opened in 1880 and claims to be the oldest and largest gelateria in Italy. The shop is worth a visit: the ice cream is still made the traditional way, prices are low and servings are generous, and the place is decorated with memorabilia that includes a copy of the original WWII-era sign proclaiming the premises for the sole use of American service personnel! Enjoy the excellent gelato at one of the many tables (without paying a surcharge), surrounded by locals; there's also outdoor seating in a rear courtyard. It also features fruit ice and novelties like micione (ice cream sandwiches that will make you "lick your whiskers.")

TRASTEVERE (on the right bank of the Tiber)

Fior di Luna - Via della Lungaretta, 96. In the heart of Trastevere - the hip, picturesque, nightclubbing district just across the Tiber - this popular artisanal gelateria relies on organic and fair-trade ingredients to produce its intensely-flavoured treats. It also offers gelati made without added sugar, sorbets, frozen yogurt, granite and chocolates. The vanilla and chocolate flavours are truly excellent. Note: Fior di Luna is thoroughly committed to fresh, seasonal fruits, which means no strawberry gelato in winter - though the cioccolato caldo makes up for that.

Da Checco - Via Benedetta, 7, behind piazza Trilussa, in Trastevere. This bar-pasticceria-gelateria belongs to the Porcelli, who for three generations have operated their restaurant - Checco er Carettiere - next door at 10 - 13 at via Benedetta. Their delicious and genuine gelato, made in-house from fresh ingredients, is a reliable option if you're in Trastevere, while their granita di caffè is up there with the best in the city.

BORGO and PRATI (the districts around the Vatican)

Gelarmony - Via Marcantonio Colonna, 34 (just north of via Cola di Rienzo). Sicilian gelato is often considered the best in Italy, and that's what this gelateria makes; Romans consider it to be the best ice cream parlour in city. The sixty flavours include an outstanding coconut - the citrusy "Vitamine Etna" - and a wide variety of intensely-flavoured fruit gelati, plus soy gelato and frozen yogurts. Granita is worth the trip alone; locals cite the mandorla (almond) flavour as one of the best. Crowds jam the sidewalk on hot summer nights - it's a lively, friendly scene. Also offers cannoli, cassate siciliane (ricotta-cake desserts) and the Sicilian tradition of gelato served in a warm brioche bun.

Al Settimo Gelo - Via Vodice, 21a, near piazza Mazzini (north of Prati). Many consider this the best gelato in Rome; it's been singled out for repeated honours from food critics, the Gambero Rosso and draws ice cream-loving Romans from all over the city. Not only is this gelato artigianale, it's also organic. The extra-friendly staff - who roast and grind top-quality nuts in-house - are patient with non-Italian speakers. Flavours include visciole (sour cherry), iraniano (with rose-water, almonds and saffron), greco (with yogurt, honey and pine-nuts) and several varieties of chocolate including one with peperoncini (hot peppers). Closed in August.

Antonini - Via Sabotino, 21-29. A favourite with locals, Antonini has one of the best selections of pastries in Rome, and their zabaione flavour is simply the best you can find in Rome!

Gelateria dei Gracchi - Via dei Gracchi, 272 (the original branch is in the Nomentano district on viale Regina Margherita, 212) offers truly exceptional gelato, with gourmet flavours such as dark chocolate with Grand Marnier, or ricotta and pear, or pine nut - as well as favourites like gianduia (chocolate hazelnut typical of Turin) or straciatella (cream with streaks of chocolate). The nuts for the hazelnut, almond and pistachio varieties are roasted and ground on site. The present is an artisanal gelateria, which means everything is made from fresh, natural ingredients. This branch is one block up from the via Cola di Rienzo, right around the corner from Gelarmony.

FLAMINIO (north of the historical centre, beyond piazza del Popolo and around villa Borghese)

Neve di Latte -  Via Luigi Poletti, 6. This might be Rome's most perfectionist gelateria. Most ingredients are organic; all are high-end. Coffee gelato? The friendly owner makes it (in tiny batches) with Jamaican Blue Mountain. Vanilla with cognac? The cognac is Hine, from France - the 1957 vintage. Depending on the variety, chocolate gelato may be made with Chuao, Amadei, or Domori chocolates. If you want more information and can read Italian, check the web site: it offers 55 (!) pages of information on chocolate alone. Mind-blowingly intense flavours justify the higher prices and the extra effort of getting here. Closed Tuesdays.

OTHER NEIGHBOURHOODS (outside the Aurelian Walls, so not in the historical centre)

Gelateria Petrini - Piazza dell'Alberone, 16a; on the via Appia, between the two metro A stops "Ponte Lungo" and "Furio Camillo". This shop exists since 1950, and the recipes have been improved during the course of 3 generations of Petrini. Only fresh and top quality ingredients, plus a master skill in realizing the ice-cream, coming from Mauro Petrini, teacher at the Carpigiani Gelato University and winner of numerous prizes, including the Gelato World Cup with the Italian team in 2008. The shop offers 30+ flavours, including seasonal fruits and different creams. Recommended: pistacchio, croccante and crema.

Mela e Cannella - Via Oderisi da Gubbio, 71, in the Ponte Bianco neighbourhood (in and around viale Marconi, behind the "Roma Trastevere" train station). The chocolate gelato (made with Belgian chocolate) at this new-ish artisinal gelateria is easily some of the best in the city and locals come from around Rome for a fix. The mandorla, starring almonds from Puglia and Sicily, is equally dreamy. Try the namesake flavour: apple and cinnamon. Other standouts include pistacchio, crema al porto (cream of port wine) and malaga (rum and raisin).Young, friendly, enthusiastic staff.

Fatamorgana -  Locations at via del Lago di Lesina, 9/11 (Trieste neighbourhood, Metro line B1, "Sant'Agnese/Annibaliano" stop) and via Giovanni Bettolo, 7 (Prati). The Gambero Rosso seal of approval is a giveaway that this unpretentious spot offers some of the best gelato in the city. A big selection of all-natural, creative flavours like "Kentucky" (chocolate with tobacco), estasi ("Ecstasy" - chocolate with hazelnut and rum) or an unexpected blend of fennel, licorice and honey will have you weak at the knees; contrary to popular wisdom that a gelateria can be good at either cream or fruit flavours, Fatamorgana excels at both (their location in Testaccio is no longer Fatamorgana, just a regular gelato place with boring flavours). A new branch opened in Monti, on piazza degli Zingari.

Greed - Via Vestricio Spurinna, 97/99 (Metro line A, "Numidio Quadrato" stop). Very simple gelateria for a gorgeous gelato certified by the Gambero Rosso. All natural ingredients and the mastery of the chef result in a superb ice-cream. Available gluten and milk free ice-creams.

You may have noticed a rather glaring omission from this list: Giolitti. What used to be the best ice cream parlour in the city is now an over-priced tourist trap serving an unremarkable (at best) gelato. So, when in Rome, do as the Romans do... and avoid it!